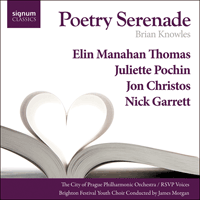 Poetry Serenade brings together four top british singers to perform the newest masterpieces from Brian Knowles, based on the work of poets including William Wordsworth, Thomas Hood and Christina Georgina Rossetti. The eighteen songs of Poetry Serenade have been chosen to give the listener an eclectic array of the differing texts and contrasting styles of composition, and the album is a showcase of marvellous with talent, not only that of the principle voices but also the RSVP Voices, the Brighton Festival Youth Choir and the City of Prague Philharmonic Orchestra.

I have always had a love of great poetry, both as a reader and a composer, and it is from this rich source that I have gained inspiration for writing many of my compositions. Indeed this source sometimes seems endless and has provided me with many opportunities to compose passionately about the joys, tribulations, love and despair of life. It has enabled my creative spirit to flourish through setting such poetry to music.

A few years ago I composed settings of He wishes for the cloths of heaven by W B Yeats and The soldier by Rupert Brooke. It would take a stony heart not to be inspired by such glorious poetry! The experience certainly whetted my appetite to set more of these texts to music and, further encouraged by my family, especially my sister, Sheila, the Poetry Serenade project was born. I feel an affinity with all of these poems, which has made my task as composer uncomplicated and so pleasurable.

When writing music, every composer owes so much to the great masters of the past. Purcell, Handel and Schubert all invigorate me with their own unique qualities, and the wonderful works of more recent British composers such as John Ireland and Ralph Vaughan Williams have been inspirational. They have helped to mould the composer I am today. I have also been influenced by Irish folk songs and sometimes a certain Celtic flavour can be found in my music. No doubt my Irish mother accounts for much of this! Even when growing up in Liverpool in the early sixties, I would eagerly await each new release of The Beatles; their instinctive genius for song writing hugely impressed me. I have always enjoyed a melodic style of writing and although as a student composer at the Royal Academy of Music in the mid sixties I was somewhat out of vogue, serialism being the fashionable pursuit, I remained loyal to my musical instincts, and to those who had such a prodigious influence on my approach to composition.

It has been a joyous labour setting these poems to music, and the eighteen songs of this album Poetry Serenade have been chosen to give the listener an eclectic array of the differing texts and contrasting styles of composition. I have received much welcomed support and encouragement from my family, my manager Rob Johnston and my producers James Morgan and Juliette Pochin, all of whom have spurred me on. I can only hope that you enjoy these settings, so skilfully orchestrated by James and Juliette, and performed with such expertise and artistry by my soloists and all the musicians who took part in this project. I am greatly indebted to everyone who has helped to make Poetry Serenade a reality.

Brian Knowles is that rare thing—a composer of great originality who can also write good tunes! This CD is a terrific example of his work in setting some of the nation’s favourite poems to music. Having enjoyed Brian’s work myself for many years now, I’m happy to think that this CD will ensure it of a wider audience. His is a talent that deserves greater recognition and I congratulate him on a tremendous achievement.