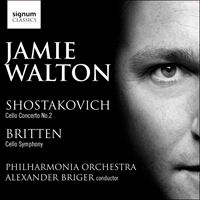 Jamie Walton's new collaboration with the Philharmonia Orchestra, led by Alexander Briger, features Shostakovich's Cello Concerto No 2 and Britten's Symphony for cello and orchestra. Jamie Walton is quickly gaining international recognition for his work, being compared to cello legends Rostropovich and Tortelier.

'Walton is a superb and unflashy exponent—there's no ego here, just consummate musicianship, excellently backed by the Philharmonia under Alex Briger, sensitive and biting in the Shostakovich, formidable and powerful in the Britten' (The Times)
'A grandmaster of his instrument is coming to maturity here, and this CD, with its technically faultless recording quality, should have a place in any collection. It deserves it' (Pizzicato, Luxembourg)

Shostakovich’s Second Cello Concerto and Britten’s Cello Symphony make the most likely of bedfellows. These works were written by composers who were pretty much direct contemporaries, who, in their own ways, and within utterly different political climates, composed in an approachable manner which could speak not only to their own homeland, but to the world at large. Both were catapulted into the international limelight as young men (age 27 in Shostakovich’s case, 31 in Britten’s) by virtue of the phenomenal success of full scale, serious and surprisingly mature operas—Lady Macbeth of the Mtsensk District and Peter Grimes. Britten’s dark masterpiece, Grimes, became the springboard for a glittering career as an opera composer, while after two years of astounding acclaim, Shostakovich’s operatic plans were effectively ruined by Stalin’s condemnation of Lady Macbeth, resulting in the work’s speedy disappearance from the Soviet repertory.

The two were also admirers of each other’s work and it is hardly a surprise that they became well-met acquaintances in later life. Britten dedicated his church parable, The Prodigal Son to Shostakovich, who reciprocated the gesture with his Fourteenth Symphony. As a young man, in 1936, Britten had attended a performance of Lady Macbeth of the Mtsensk District and, on witnessing the apparent condescension from an older generation of British composers, excoriated them as, ‘the “eminent English Renaissance” composers sniggering in the stalls … There is more in a single page of his Macbeth than in the whole of their “elegant” output.’ Around this time, Shostakovich’s occasional influence can be spotted in a number of Britten’s works, including the Sinfonia da Requiem and Britten continued to be fascinated by Shostakovich’s major works over the years, issuing a heartfelt and warm tribute on the occasion of the latter’s 60th birthday. Shostakovich, for his part, discovered Britten’s art only later in life, but was no less impressed than the student Britten had been of his own, almost 30 years earlier. It can be difficult to weigh-up Shostakovich’s articles and speeches as they could easily have been made under some duress. Nevertheless, his mentions of Britten tend to be unremittingly positive. Writing to his close friend and correspondent, Isaak Glikman in 1963:

I have been sent a recording of Benjamin Britten’s War Requiem. I am playing it and am thrilled with the greatness of the work, which I place on a level with Mahler’s Das Lied von der Erde and other great works of the human spirit. Hearing the War Requiem somehow cheers me up, makes me even more full of the joys of life.

Glikman also reports Shostakovich preferring Britten’s Requiem to Mozart’s and, as early as 1959, named his English counterpart as one of only a handful of the 20th Century’s great composers. In an interview in 1968, he praises further still, expressing his desire to see,

More Brittens. Russian ones, and English ones, and German ones. Various. And of different generations. What attracts me to Britten? The strength and sincerity of his talent, its surface simplicity and the intensity of its emotional effect … I think that anyone who takes music seriously ought to try to get to know Britten’s works better; they are, by the way, played here very often.

Of course, there were a great many differences between the two men on matters musical and otherwise. Britten had the freedom to tour the world accepting generous commissions, overseeing premieres, absorbing the acclaim and the honours attendant on his status. Shostakovich’s own status in the Soviet Union was mutable and often rather less elevated, notably after various official purges on composers and on Shostakovich’s music, in particular. Money was not so easy to come by and was supplemented by the odd recital tour and teaching appointments. Far from consorting with the jet set, Shostakovich was sometimes in fear of his family’s safety and, at times, his own life. Only after the partial thaw in the icy Cold War relations in the 1950s could the Russian experience foreign adulation at first hand. Musically speaking, their languages were not so distant, building on their shared admiration of Gustav Mahler and Alban Berg, among others. But, in terms of transmission of the language, Shostakovich is lauded above all for his symphonies and string quartets, whereas Britten’s fame leans heavily on his contributions to the operatic, choral and vocal repertories.

Shostakovich and Britten finally met for the first time at the Royal Festival Hall in London, September 1960, on the occasion of the UK premiere of the Russian composer’s First Cello Concerto. Britten accepted Shostakovich’s invitation to sit with him in his box only days after being amazed by a radio broadcast of the concerto’s soloist and dedicatee, Mstislav Rostropovich. After the concert, Shostakovich introduced Britten to Rostropovich whose years behind the Iron Curtain precluded any thorough knowledge of Britten’s output. Rostropovich had heard only the Young Person’s Guide to the Orchestra, which is based on a theme by Purcell. Rostropovich, having not even seen a photograph of Britten, and working purely on this Baroque-flavoured evidence, had assumed Britten was a composer from a previous century and fell into a fit of laughter on being introduced to him. On realising that this was no practical joke and Benjamin Britten was indeed standing before him, he immediately set about imploring the composer to write something for him.

It didn’t take long for the ebullient, irrepressible Rostropovich and Britten to form a close and lasting personal and professional relationship. Communicating in their own bastardised form of German which came to be known as ‘Aldeburgh Deutsch’, Britten wrote his Op 65 Cello Sonata, three cello suites and the Cello Symphony for Rostropovich. Britten, his partner the tenor Peter Pears and Rostropovich’s wife, the soprano Galina Vishnevskaya, appear to have enjoyed a free and easy friendship, meeting socially and often performing recitals. Aside from the cello works, Britten also wrote his song set, The Poet’s Echo for Vishnevskaya, and the solo soprano part in his War Requiem was written expressly for her voice.

After a short illness in 1962, Rostropovich wrote: ‘Dear Ben and Peter, if you want me to recover completely I ask you to see the doctor whose address is: The Red House, Aldeburgh, Suffolk. Only he can bring me to life by composing a brilliant cello concerto.’ On receiving the first movement, Rostropovich replied that it was ‘the very top of everything ever written for the cello’. After a successful Russian sojourn the previous year, Britten was invited by the Soviet authorities to conduct the premiere of the Symphony for Cello and Orchestra Op 68 on 12 March 1964, in the Great Hall of the Moscow Conservatory with Rostropovich as soloist and Shostakovich in the third row. The Cello Symphony, as the name implies, is a dialogue between orchestra and cello rather than a conventional adversarial concerto. The first movement is turbulent, mysterious and intricate, while the following scherzo, marked Presto inquieto is suitably unsettling, featuring macabre effects from the strings. The eloquently elegiac Adagio leads into the Finale where a confident passacaglia theme is introduced—a response to Rostropovich’s exuberant personality, according to some. After the performance, Britten secured a deal with the Soviet Minister of Culture to grant exclusive performance rights to Rostropovich until the end of 1965—adding yet another string to the cellist’s bow.

By this time, Shostakovich and Rostropovich had known each other for over 20 years. They first met at the Moscow conservatory where the cellist (then also a budding composer) entered Shostakovich’s composition class in 1943. Their good friendship seems to have remained tinged with a master-pupil relationship, though Shostakovich was not short on kindnesses such as helping to fund the young man’s first concert suit. That both of Shostakovich’s concertos were written specifically for Rostropovich is testimony enough to the esteem in which the composer held the cellist. Rostropovich, in interviews, speaks of his older friend with a mixture of awe and admiration. On his days spent as a student playing duets and learning composition from Shostakovich he opines, ‘That was a real musical university for my life.’ And in interview after interview similar emerges Shostakovich’s ‘deep humanity towards everything—in life, in his relationships and in his art.’

Judging by the composer’s surviving letters, the Second Cello Concerto was originally planned as a symphony, but became what Shostakovich wrote of as ‘the Fourteenth Symphony with a cello part’. Like Britten, Shostakovich was reluctant in the extreme to show others his incomplete scores, but did send a draft of the concerto to Rostropovich who has reported his delight that his own suggestions for the third movement cadenza were incorporated into the final score. Britten himself broke his own no-show taboo by showing Shostakovich his own sketches for his final opera, Death in Venice.

Struck low by a heart attack in May of 1966, just as celebrations to commemorate his 60th birthday were underway, it was unclear as to whether Shostakovich would be in good enough health to attend the premiere of the concerto on 25 September 1966. In the event, he was greeted with a rapturous ovation when, just two years after Britten’s Cello Symphony premiere in the same Moscow Conservatory hall, he took his seat to witness Rostropovich and the USSR Symphony Orchestra perform his Cello Concerto No 2 Op 126 under the baton of Evgeny Svetlanov. The concerto itself, completed in a sanatorium in Yalta, opens with an intimate, introspective Largo movement which, like Britten’s work, unveils no great Romantic hero battling against orchestral might. Indeed the exchange between the cello and the shuddering booms of the bass drum suggest quite the opposite. The remaining two movements are both marked Allegretto; a scherzo attempts to throw a little sardonic light on the brooding mood while the Finale is notable for its extended cadenza and the attenuating orchestra finally giving way to the cello’s final, resigned utterance.

After a year headlined by poor health and exhausting public celebrations, it might have been something of a relief for Shostakovich to welcome back two recently acquired and undemanding friends—Britten and Pears—and to bring in the New Year of 1967, at home, in the company of these sympathetic bedfellows.