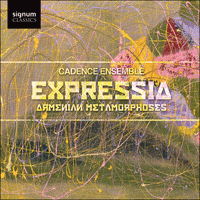 Since the Cadence Ensemble’s premiere performance in 2004, the group has quickly become one of the leading and most popular music groups of Armenia. Initially performing the works of Argentine composer, Astor Piazzolla the ense mble has expanded its repertoire to encorporate contemporary European and Armenian composers. Under the leadership of pianist, Armen Babakhanian, the ensemble have enjoyed international success. Most recently the ensemble have given concerts in Paris, London and Brussels.

Komitas Vardapet
Komitas Vardapet was one of the most renowned Armenian priests and a composer, choir leader, singer, music ethnologist, music pedagogue and musicologist. Many regard him as the founder of modern Armenian classical music. Komitas learned a great deal of music from the monks at the Echmiadzin Seminary and studied music with the famous composer Kara-Mourza, which eventually led him into both secular and religious composition. In 1896 he was awarded a doctorate degree in musicology and later returned to Echmiadzin as Choir Director and Instructor of Music.

Komitas wrote over three thousand songs in Armenian, Arabic, Kurdish, and Persian, and also contributed significantly to the modern Armenian Patarag (Armenian Church liturgy or mass). His enduring contribution to the musical world was to rediscover Armenian medieval sacred as well as folk music, and he was the first non-European to be a member of the International Music Society. As a composer, singer and conductor Komitas performed in Paris, Geneva, Berne, Constantinople, Venice, and Alexandria.

Sayat-Nova
Sayat-Nova, or ‘King of Songs’, is the name given to Harutyun Sayatyan: a poet, singer and kamancheh player, who performed in the court of Heraclius II of Georgia. About 220 songs can be attributed to Sayat-Nova—although he may have written thousands more—and these songs are still sung today. Most of his exisiting songs are in Armenian; the remainder are in Azeri Turkish and Georgian. Sayat-Nova is officially recognized as Armenia’s greatest gusan, or folk singer-songwriter.

Shirin
Shirin, or ‘Sweet Voice’, is the name given to Hovhannes Karapetian, known for his thriling voice and multi-instrumental talents. As ashugh, or troubadour, he performed in many regions from Yerevan and Tiflis to New Bayazet and Constantinople. Most of his extensive collections of songs are in Armenian, the remainder in Turkish.

Alexander Harutyunyan
Alexander Harutyunyan, a famous Armenian composer, graduated from the Yerevan Conservatory’s piano and composition department. Since 1962, he has held a professorship at the Yerevan State Conservatory. He has been honoured several times as one of Soviet prominent composers and is the recipient of the National Academy’s superior award-golden medal.

Many share the opinion that Harutyunyan is the successor to the tradition laid down by Komitas Vardapet to present Armenian music to a wider international audience, and he has become hugely popular in his homeland with works such as his Great Symphony, the opera Sajat-Nova and many instrumental concertos.

Arno Babajanian
Arno Babajanian was born in Yerevan, Armenia. By the age of 5 his extraordinary musical talent was clearly apparent, and at the suggestion of the composer Aram Khachaturian he was enrolled two years later at the Yerevan Conservatory. In 1938, he continued his studies in Moscow with Vissarion Shebalin. He later returned to Yerevan, where, from 1950-1956, he taught at the conservatory. It was during this period (1952) that he wrote the Piano Trio in F sharp minor. It received immediate acclaim and was regarded as a masterpiece from the time of its premiere.

Subsequently, he undertook concert tours throughout the USSR and Europe and in 1971 he was named a People’s Artist of the Soviet Union. As a composer Babajanian was active in most genres, even writing many popular songs. Much of Babajanian’s composition is rooted in Armenian folk music and folklore, combined with the virtuosic style of Rachmaninov and Khatchatourian, with his later works influenced by Prokofiev and Bartók.

Karen Ananyan
Karen Ananyan studied piano and composition at the Yerevan State Conservatory where today he is a piano professor. He has created numerous solo piano, symphonic and chamber music works, as well as songs and romances. His piano works and jazz compositions have been published and recorded, and as a pianist and composer he has performed in France and Russia.

Aram Khachaturian
Aram Khachaturian was born in Tbilisi, Georgia, to a poor Armenian family. In his youth he was fascinated by the music he heard around him but it was not until 1921 that he travelled to Moscow and was admitted to the Gnessin Institute where he studied cello under Mikhail Gnessin and entered composition class in 1925. It was here that the young Armenian developed a love for Orientalism reinforced by an passion for the music of his homeland.

He held important posts at the Composers’ Union, which would later severely denounce some of his works as being ‘formalist’ music, along with those of Sergey Prokofiev and Dmitri Shostakovich. These three composers became the so called ‘titans’ of Soviet music, enjoying world-wide reputation as leading composers of the 20th century.

Khachaturian’s works include concertos and concerto-rhapsodies for violin, cello, and piano, three symphonies, the Trio for clarinet, violin and piano, and the ballets Spartacus and Gayane, which was used in Stanley Kubrick’s film 2001: A Space Odyssey. Gayane features in its final act what is probably his most famous piece, the ‘Sabre dance’.