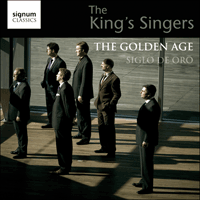 The first release in The King’s Singers 40th anniversary year celebrates music by Portuguese, Spanish and Mexican composers from the period known as the Siglo de Oro, The Golden Age.

The idea for the disc came from the King’s Singers church concert programmes, where the acoustics allowed great scope for drama. The music featured is exceptionally beautiful and deeply moving, with a combination of joyful and sorrowful s e ttings, indicating the substantial outpouring of music during this period.

Regularly performing over 100 concerts per season, the King’s Singers delight audiences a round the world. As the London Times states, they are ‘still unmatched for their musicality and sheer ability to entertain’.

'The King's Singers perform with their customary clarity of line, rhythmic grace and attention to texture' (BBC Music Magazine)» More

'A 40th anniversary release from The King's Singers, emotionally charged yet immaculate execution, includes unmissable performances of Lobo's Lamentations and Versa est in luctum' (Classic FM)
'The King's Singers as usual bring a freshness and vitality to their vocalism and a warm, welcoming quality to their sound that projects a certain 'personality' that not only makes listening easy, but brings substantial rewards as well' (Classics Today)» More

Much has been said about the supposed mysticism of the music of Spain during the Siglo de Oro, much poetic connection made with the darkened interiors, the glowing black and gold, those necessary adjuncts to the transcendental visions of El Greco. While it is true that there is exaggeration in this, and while it is true that any cursory examination of the music produced in Spain, as well as Portugal and Latin America, will reveal, obviously, an abundance of joyful settings of joyful and celebratory texts, it is also true that it is extraordinarily easy to see in the substantial outpouring of music of mourning during this period something of a natural aptitude for the sublimation of lamentation, both public and private, by means of ritual art.

The Iberian tradition of polyphonic settings of Versa est in luctum, a text of mourning originating in the Book of Job and turned into a responsorial form, seems to have begun with Francisco de Peñalosa—who at the beginning of the sixteenth century set the entire responsory together with its verse—and to end somewhere in the early eighteenth century; the energetic setting by José Torres dates from 1703. Torres, like Victoria, Lobo and Vivanco, set only the text of the responsory, making it a motet with no specific liturgical function. Victoria’s grand and luminous setting was published in 1605 with his 6-voice Officium Defunctorum (Requiem), written for the obsequies of the Dowager Empress Maria, sister of Philip II, held in 1603. It is likely to have been sung between the funeral oration and the final absolution, while those present assembled around the catafalque.

Similarly, Lobo’s setting was almost certainly written for the funeral of Philip II in 1598, and its dignified power makes it one of Lobo’s most affecting, and, nowadays, one of his most frequently sung, works. Typical of Lobo is the way in which the two treble parts move downwards imitatively, while the tenors ascend. His magnificent Lamentations for Holy Saturday survive in a manuscript from Seville Cathedral, written more than 150 years after the composer’s death. While the texts of Jeremiah are declamatory and relatively simple, Lobo gives full rein to his melodic gifts in the flowing melismatic music he writes for the Hebrew letters which intersperse the Latin text, making also overt reference to the traditional Toledan chant in the upper voices. Rather different is Lobo’s funeral responsory Libera me, a stately but impassioned plea, written for an unknown, but clearly significant, occasion.

Sebastián de Vivanco was the maestro de capilla at Ávila, later moving to Salamanca, where he also taught at the University. His beautiful setting of Versa est in luctum, scored for the same disposition of voices as those by Victoria and Lobo, survives in a manuscript written long after his death, thereby proving its longevity in the repertoire. It was not only Spanish composers who set this text; it was also used in Portugal and in the New World. The compact setting by Juan Guttiérez de Padilla, born in Spain but who emigrated to Puebla, Mexico, at some point before 1622, is definitely part of this tradition. It also shows a more intimate, contemplative side of a composer who is better-known for his double-choir music and villancicos.

The much-revered hymn for Holy Week Crux fiidelis is emblematic of the great patron of the arts who was King John IV of Portugal. Not only did he support composers economically, by paying the costs of printing, but he was an accomplished musician himself. His library at Vila Viçosa contained an extraordinary quantity of music, both printed and manuscript, from many countries; it was entirely destroyed by the devastating Lisbon earthquake in 1755. John was declared king in 1640, after sixty years of Spanish rule: his support of national composers was in this sense as much a political as a cultural statement, but it would be extremely simplistic to consider the two countries’ artistic productions as separate, since there was constant interchange, musicians frequently travelling and working in both countries.

The latest music on this disc is by the Portuguese Diogo Dias Melgás. He was born, according to the bibliographer Barbosa Machado, in 1638, in the town of Cuba (near Évora). He entered that choir school at Évora Cathedral probably in 1647, and in 1663 became mestre da claustra, in 1662 rector of the choir school, and two years later mestre da capela. He finally resigned in 1697, on grounds of health, and died in 1700. His most remarkable music is certainly to be found in his series of motets. As Pia et dolorosa mater and the penitential In ieiunio et fletu show, Melgás’s highly original harmonic sense, in conjunction with his contrapuntal mastery, make him highly representative of the Portuguese tradition, which was itself so interconnected with that of Spain. Indeed, there is a sense in which all the composers whose music is recorded here spring from the affirmation of technical mastery and poetic beauty in the work of the great Cristóbal Morales, during the first half of the sixteenth century. His Missa Mille Regretz in turn pays homage to Josquin, upon whose famous lovelorn chanson it is built:

A voice of weeping indeed.

For a group like ours the choice of repertoire for recording often seems bewilderingly large. So why did we choose Portugese, Spanish and Mexican music from the period known as the Siglo de Oro—the Golden Age?

The idea came from our church concert programmes, where acoustics, space and atmosphere allow great scope for drama. Beginning at the back of the church with Crux fidelis and slowly moving eastwards as the pieceunfolds has proved to be a magical way to start. More than one audience member has told us that if the concert had ended after that one piece, they would have gone home happy. But that would have denied them the chance of hearing one of the most famous pieces from this era—Alonso Lobo’s incredible version of Versa est in luctum, which often closes the first half of the concerts.

With our appetites whetted we then drew on collective knowledge and experience. The King’s Singers album Fire Water (2000) had included a Benedictus by Morales and the Lamentations of Juan Gutierrez de Padilla, two composers we felt must be represented. Delving into the memory banks brought out a surprisingly large number of settings of the Versa est in luctum text. The musical references in it to harp, organ, and voices of weeping undoubtedly endeared it to composers, and we chose three more to accompany Lobo’s. You will be able to hear a bajón—the precursor to the bassoon—playing in these settings and in other pieces besides. It provides an authentic sound, giving a special quality that immeasurably enhances the performances. We are very grateful that Keith McGowan was able to join us to play in the sessions.

Looking through our personal music collections next allowed us to rediscover the music of Melgas, whose quirky compositional style, sounding like a precursor to Bruckner, immediately endeared itself to us. But more searching was needed to make a satisfying album programme. That search ended when we found Alonso Lobo’s wonderful Lamentations, and his Libera me, which, if Crux fidelis provides the processional, gives us the recessional. Like much of the music on this album, the Lamentations has an intensity that no doubt starts with the text, but then permeates the music with a dark richness. Lobo reserves his most imaginative writing for the setting of the Hebrew letters, as effective a musical representation of tear drops running down a face as you could wish to hear. The unexpected chord progressions show a sense of harmonic freedom that reminds us of another one of our albums—Gesualdo’s Tenebrae Responsories (2004).

As we recorded we ran out of superlatives to describe the quality of this music, full of Iberian Catholic flavour and colour, and imbued with a religious sensuousness. It shows composerswriting at the height of their skills in rich, powerful countries confident of their standing both in Europe and the New World. This music might be associated with death and mourning, but it is exceptionally beautiful, and we hope our performances can move your souls as ours have been moved.