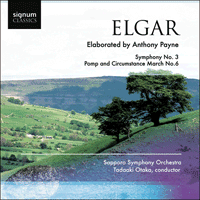 The Sapporo Symphony Orchestra take on Elgar’s Symphony No 3 under Tadaaki Otaka’s baton with as much flair as they did in their Japanese premiere of the work in 2004.

In 1995 Anthony Payne was commissioned to complete an ‘elaboration’ of the entire symphony and completed Elgar’s original ‘sketches’ of the work in what can be immediately recognised as Elgarian style.

Payne similarly completed Elgar’s Pomp & Circumstance March in 2006, Elgar’s first large orchestral work since the Cello Concerto, pulling out all the stops in a brilliant orchestration. This is only the second recording to be made of this work.

The Japanese orchestra affirm their accolade as one of the finest orchestras in Japan in this stunning performance. The orchestra has received high praise from critics and public alike, distinguished by its clear sound and dynamic powers of expression.

'Otaka allows the music plenty of time to breathe, but at the same time he's good at drawing it all together' (BBC Music Magazine)» More
'It is revelatory to hear a Japanese orchestra sounding so confident and resplendent in music that, culturally speaking, might as well come from another planet' (Classic FM)» More

‘Don’t let them tinker with it, Billy—burn it!’
I am hoping to begin ‘scoring’ the work very shortly: I am satisfied with the progress made with the ‘sketch’ & I hope that the ‘fabric’ of the music is as good as anything I have done,—but naturally there are moments when one feels uncertain: however I am doing the best I can & up to the present the symphony is the strongest thing I have put on paper.

Elgar’s letter to John (later Lord) Reith, titan of the BBC and ultimate commissioner of the aging composer’s Third Symphony, suggests that the piece was well on its way to completion by February 1933. Indeed, just two months later, he was confident enough to begin correspondence with the BBC concerning the date of the first performance and, intriguingly, mentions that he should be able to ‘feed’ his publishers with manuscript material in the near future. The very same day he suffered the first of a series of ‘bad turns’ that forced him into a nursing home for examination and to take a step back from promoting and continuing work on the symphony. He was soon asking Reith, in a confidential letter, not to ‘refer publicly to the Symphony in any way at present; we will wait to see what happens to me’. What happened was the diagnosis of an inoperable, malignant tumour in October 1933, and Elgar’s death four months later.

After the end of the Great War and most especially the death of his greatest supporter, his wife Alice, in 1920, Elgar wandered into a creative no man’s land. Over the next ten years he was to produce little music of substance, falling back on transcriptions, arrangements, some incidental music and a few songs. Monetary concerns surfaced: the cost of maintaining his home in the grand Edwardian fashion was at odds not only with the times but with the income Elgar was receiving. Just as our world of digital downloads is fraught with debacles over payments to composers and performers, so the nascent BBC radio broadcasts, record companies, publishing houses and collecting societies were often initially mistrusted by musicians. The BBC, The Gramophone Company and the Performing Rights Society were just getting into their stride in the 1920s and, and although Elgar was treated well, financially and recording-wise, by the renowned Fred Gaisberg of The Gramophone Company, relations with his publishers were on the wane, reflecting the decline in production of new works, procuring of new commissions and of their once attendant audience. As the decade dragged on for Elgar, the Cello Concerto in E minor of 1919 looked increasingly likely to be his final major composition.

But Elgar wasn’t quite ready to put down his pen and the year 1930 saw the 72 year-old experiencing something of an Indian summer, completing the Severn Suite, Pomp & Circumstance March No 5 and the Nursery Suite in a matter of months. The fifth Pomp & Circumstance March, which was added to the earlier four marches forming Op 39, is an admixture of freshly composed material and sketches from a generation before. Although not in any manner a symphonic composition, this was his first work for large orchestra since the Cello Concerto and Elgar pulled-out all of the stops in a brilliant orchestration, dedicating it to his good friend, the organist Percy Hull. It is clear that Elgar intended to write a set of six marches, but it wasn’t until 2006 that Anthony Payne completed the Pomp & Circumstance March No 6 in fine style. Percy Hull was later to hear, in his own words, ‘quite a lot of’ the Third Symphony, with the composer at the piano. And he was far from the only personal friend to have been treated to extensive portions of the work. William Reed, a long time companion of the composer, and the much-esteemed leader of the London Symphony Orchestra, worked on the sketches on numerous occasions with Elgar accompanying Reed’s violin.

It was to Reed that the terminally ill Elgar uttered the famous words, ‘Don’t let them tinker with it, Billy—burn it!’ That Billy Reed didn’t consign the sketches to the bonfire reflects not only his perception of Elgar’s state of mind at the time, but also the fact that Reed seems to have been under the impression that he had played through what he thought to be the complete work—complete at least in Elgar’s mind, and when he was at the piano with Billy, if not actually annotated on manuscript paper.

The initial and prime force behind the symphony was the dramatist and former music critic, George Bernard Shaw, then in his pomp as the grand old man of English letters. A year older than Elgar and a recent recipient of the Nobel Prize for literature, Shaw was one of the few surviving acquaintances who had the intellectual and artistic heft to hold the grand old man of English music in his thrall. In May 1930, thanking Elgar for the dedication of the Severn Suite, Shaw, a bit tongue-in-cheek and a little peeved, continues, ‘I am really not worth a symphony; but a Serenade, say …that would be about my size’. Within two years, it was a forgiving, generous and persuasive Shaw who had sparked the BBC into life, Reith into a commission.

Thereafter, newspaper speculation over the progress of the symphony only mirrored Elgar’s own contradictory comments. The work was, in Elgar’s letters to friends, confidantes and curious journalists variously ‘mythical’, ‘practically complete’ and then uncertain—‘whether you will ever hear more of Sym. III …remains to be seen’. With a mass of sketch material, a handful of pages in full score and no clear, continuous draft, what remained to be seen was whether a version of the work could ever see the light of a concert hall.

With Billy Reed saving the symphony’s sketches from the flames after Elgar’s demise, the composer’s daughter, Carice, together with the BBC, prevented access for anybody seeking to complete the work in any form or manner. Before his death in 1942, Reed published a significant number of the most important manuscript pages in magazine and book form with remarks suggesting where each sketch might fit into an overall symphonic scheme. Whatever Reed’s intentions, such publications could only serve to whet the appetite of budding completists everywhere. In the decades following Reed’s death, the BBC had already dabbled in radio programmes detailing other reconstructions, such as the partial performing version of Mahler’s Tenth Symphony by Deryck Cooke in 1960. Such items were an open invitation for Carice to sanction a similar reconstruction for her father’s unfinished work, albeit a mightier task than dealing with Mahler’s almost entirely continuous draft. Efforts made by the BBC, with Carice’s endorsement, to realise Elgar’s material came to nothing. But, copyright was fast running out and the manuscripts would be free for all and sundry to tinker with come January 2005. Thus, Elgar’s heirs took the laudable and sensible decision of commissioning Anthony Payne to complete an ‘elaboration’ of the entire symphony in 1995. Payne had been aware of the sketches since 1972 and had since made radio programmes on the available material and his commitment to the piece was such that he had even completed the opening movement prior to any thought of a commission. Payne’s elaboration is most likely as close to a true Elgar Symphony No 3 as we could ever hope to experience. It is immediately recognisable as Elgarian in style, length, breadth of utterance and purposeful progress. Working with 130 pages of, at times, quite disparate sketches, Payne has delved deep, through his own compositional style to seek out a possible outcome of the material and in doing so has produced a remarkable work. A great success at the premiere at the Royal Festival Hall, London, in 1998, with the BBC Symphony Orchestra under Andrew Davis’s baton, the work has gone on to immense international acclaim and is gradually assuming a well-deserved place in the symphonic repertoire of orchestras the world over.