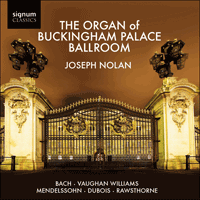 The Organ of Buckingham Palace Ballroom

Following the success of Joseph Nolan’s appearance in Music for the Coronation of James II, he returns to Signum with a solo disc of organ music, capturing music from some of the finest composers of the instrument. With works from Bach’s famous Passacaglia in C minor to Noel Rawsthorne’s Dance Suite (with inspiration from Michael Flatley’s Lord of the Dance) this disc certainly pushes the boundaries of organ music. Fresh from a tour of the USA in 2007, Nolan has found international recognition as well as his commitments as organist at Her Majesty’s Chapels Royal where he was appointed in 2004.

'Nolan not only draws real sparkle from the instrument, using its unprepossessing resources to amazing effect, but turns out a magisterial account of the Sonata's first movement. … surely [his] ebullient last-movement antics would have amused old Queen Vic herself' (Gramophone)
'Nolan brings exactly the right touch—crisp, rhythmic playing but also a certain restraint which prevents this music from sounding merely vulgar or camp' (Choir & Organ)» More

To 19th century middle-Europe Bach was the Parnassus, the ‘pictorial musician-poet’, of the age. Worshipped by Beethoven (1801)—‘first father of harmony’. Monumentalised by Weber (1821)—‘a Gothic cathedral dedicated to the arts’. Deified by Schumann (1840)—‘unapproachable, unfathomable’. The Bach Awakening was a peculiarly German/Anglo-Saxon affair. It elevated one man’s genius. It gave the Baroque Romantic pertinence. It made History acceptable to programme. Sailing by the flag of German fugue, Mendelssohn the conductor, Liszt the pianist, led the way, promulgating Bachian aesthetic for the common good. Bach’s keyboard output spanned his life. Music for private, public or pedagogical use, universally destined if at the outset confined to the locale of his appointments—for ‘Bach and his fellow organists and cantors belonged to a closed society [not to the “larger world” of the “great centres of Europe”] His reputation as an organist was widespread, but it was a provincial fame, far removed from the European reputation that Handel enjoyed’ (Max Graf, Composer and Critic, 1947). The organ works comprise chorale settings plus preludes, fugues, trio sonatas, duetti, fantasias, toccatas and arrangements—mostly from the secular years pre Leipzig and duties at the Thomaskirche. The 292-bar Passacaglia in C minor towers among the most regal and visionary. If, as widely assumed, it was written in Arnstadt or Mühlhausen where Bach was organist (1703-08)—the period when he walked to Lübeck to hear Buxtehude play—then, astonishingly, it’s the statement, the profundity, of a young man still in his late teens/early twenties. In the typical passacaglia style of the day, the music presents a set of continuous variations on a repeating basso ostinato (an eight-bar triple-time ground initially unaccompanied on pedals) and the harmonic logic implicit within its contour. Notated with a key-signature of two rather than three flats (following baroque convention), and without tempo indication (save the adagio of the last two bars), the ebb and flow is dictated by quickening or slowing note-values within a constant pulse. Re-aligning precedent and procedure to consolidate the model championed by Beethoven and Brahms, Bach significantly doesn’t confine his ostinato to only the bass register; nor does he adhere routinely to its short-long iambic metre—modifying the rhythm as early as bar 40, using semiquaver couplets and rests to break-up the legato phrasing. In 88/89ff he transfers the melody to the upper voice; similarly in 168/69ff where, marked Thema fugatum, it becomes the subject of a four-part fugue (ASBT exposition). Elsewhere he arpeggiates the chordal scheme, sketching a chaconne-style toccata progression on the manuals, 120/21ff. Transmoding, transposing or adapting the ground into other keys (fugue, 197/98ff) is also ventured. All devices, he would have claimed, designed to create ‘a well-sounding harmony to the Glory of God’ (courtesy of Friedrich Niedt).

Born to a clergyman in Brahmsian Gloucestershire, Vaughan Williams lived through times of marked cultural and aesthetic diversity, his output spanning two world wars and the history of England’s sunset from Empire to Commonwealth. Liszt, Wagner and the New German School, Stockhausen, Boulez and the Darmstadt radicals, framed his life. The high ground between Elgar and Britten was his natural command. Music, he believed, was ‘the only means of artistic expression which is natural to everybody. Music is above all things the art of the common man […] the art of the humble […] Music cannot be treated like cigars or wine, as a mere commodity. It has its spiritual value as well. It shares in preserving the identity of soul of the individual and of the nation’. A predominantly four-part andantino in G major, contemporary with the Pastoral Symphony, Rhosymedre or Lovely (‘Our Father, by whose name’) was the second of Three Preludes founded on Welsh Hymn Tunes published in 1920—to a melody by J E Edwards (1805-85).

In common with his German predecessors, contemporaries and successors—Beethoven, Spohr, Weber, Schumann, Brahms, Bruch, Reger—Mendelssohn, pianist and organist, master of the majestic and the modest, the supreme Bach revivalist of his generation, married Classicism and Romanticism. Weighing counterpoint and chorale, profundity and piety, the late A major Organ Sonata (completed in Bad Soden near Frankfurt am Main, 17 August 1844, a month before the Violin Concerto) was the third of a set of six, culminating a series of compositions for the instrument begun in Berlin in the 1820s. Central to its design is a four-part fugue in A minor (on a 4/4 subject led by a bold anacrusis head-motif [E-F-D-G sharp] announced in the bass followed by tenor, alto and soprano entries) offset against a pedal line on the 1524 Lutheran chorale Aus tiefer Not schrei ich zu Dir (Psalm 130, ‘Out of the depths have I cried unto thee, O Lord’). This fugue is flanked by matching prologue and interlude paragraphs in the major, con moto maestoso, fortissimo, the second tonally milder. Tempo (andante tranquillo), metre (3/4) and atmosphere (piano e dolce) change for the final section, an epilogue/quasi-voluntary flowering from the upbeat. Witnessing Mendelssohn’s life-long interest in the Beethoven idea of continuous ‘sonata’, the whole plays without a break.

Théodore Dubois studied at the Paris Conservatoire, winning the Prix de Rome in 1861—one of the many long-forgotten names to grace that institution. In 1877 he succeeded Saint-Saëns as organist at the Madeleine, and in 1896 took over from his former composition teacher, Ambroise Thomas, as director of the Conservatoire. Believing himself to be a man of the stage, his successes came in other spheres: ‘pure style’ masses, motets, oratorios, symphonies, chamber music. Of the many organ pieces he left, nearly a hundred, the Toccata in G major is in the form of a bustling neo-classical allegro, with a central episode of slower notes in B major punctuated by curtailed references to the principal material. The sonorous codetta, fortissimo-allargando, draws on the middle section.

Noel Rawsthorne, Mersey-bred, Manchester-trained, was organist at Liverpool Anglican Cathedral from 1955 to 1980, at his disposal the largest cathedral organ in the United Kingdom—‘the grandest Willis of them all’ (Simon Lindley). His popular, populist Dance Suite was composed ‘for Gordon Stewart to celebrate the completion of the restoration of the Father Willis Organ in Huddersfield Town Hall, October 1997’. Familiar tunes, allusions and patter crowd the pages: I. March ‘On Ilkley Moor’ (C major); II. Dancing feet (Jazzy—with a swing, for pedals alone: E flat); III. Waltz (Poco rubato: D minor); IV. Danse des papillons (C major); V. Line dance (C major). The third scena takes Valse triste to the picture-palace Wurlitzer; the fourth is a latter-day Flight of the Bumblebee. Line dance, a twinkle-toe medley inspired by Michael Flatley’s 1996 Irish dance spectacular Lord of the Dance transported to the Last Nights at the Proms, opens with the tune of that name, the Shaker hymn Simple Gifts, and, drawing events full circle, closes with Ilkley Moor.

Dating from 1818, the English three-manual Buckingham Palace Ballroom Organ was built originally by Henry Lincoln for the Royal Pavilion, Brighton. On Victoria relinquishing the Pavilion as a residence, the instrument was moved to London and installed at the Palace by Gray & Davison in 1855. Its modern renovation, by William Drake of Buckfastleigh, was completed in 2002. ‘The grandest thing in the Palace, is perhaps the ball-room,’ pictured Arthur Henry Beavan in his Imperial London, published in 1901. ‘It is nobly proportioned, lighted from above by electricity, and from the sides by handsome gilt-bronze candelabra. Its ceiling is richly decorated; the walls are panelled in crimson silk; and the floor is beautifully inlaid with oak. When a state concert is in progress, its appearance is striking in the extreme. On either side are three tiers of seats facing those on the floor-level, all occupied by most brilliantly-attired personages, for on these occasions the most beautiful dresses and jewels are worn. At the upper end of the room is the organ […]; on one side of the platform is a right royal-looking harp, and on the other a fine [1856] Érard Grand [today in the White Drawing Room], ornamented with richly gilt scroll-work. When the late Queen was present, she sat in the front chair close to the platform; and a lady who had the honour of singing an ode before her on one of these grand occasions in the Jubilee year of 1887, told me that Her Majesty followed every note with the careful attention of a professed musician.’