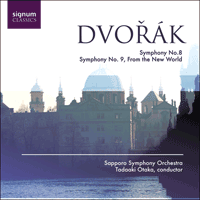 Dvořák’s Symphony No 8 is a symphony that marks Dvořák’s first proper venture into the profusion of ideas and effects that, after the Ninth Symphony, became his home ground as a composer. Symphony No 9, 'From the New World', received a rapturous reception at its Carnegie Hall premiere, a reception, which has been repeated thousands of times across the globe. Enjoy an extraordinary performance of two of Dvořák’s best known symphonies, beautifully performed by Japan’s leading symphony orchestra. The Sapporo Symphony Orchestra is based in the Sapporo Concert Hall 'Kitara' which boasts some of the finest acoustics in the world. The orchestra is distinguished by its clear sound and dynamic powers of expression, and has received glowing accolades from around the world.

'Exceptionally clean textures again reflecting the outstanding acoustic qualities of the hall which is the home of the Sapporo Symphony Orchestra. Clarity of texture is again an outstanding quality of the last two movements with the Scherzo bouncily sprung and the final fresh and incisive, building up to a powerful coda, with the final chord fading on a diminuendo as specified in the score. Altogether an excellent album, generously filled' (Gramophone)
'Otaka directs refreshingly straightforward accounts of two much-loved and recorded symphonies that have a tendency to collapse under the emotional weight of over-interpretation. Otaka's vision works particularly well in the enchanting Eighth Symphony which flows by effortlessly, fresh-textured and with rhythms delightfully pointed. The 'New World' is a rather different kind of piece, one which (as witness the first moment's fiery central development section) occasionally erupts with a visceral power and energy that Otaka has a tendency to shy away from. Everything is meticulously prepared and beautifully played, but the Sapporo players keep well within their emotional safety zone' (Classic FM Magazine)

Jeanette Meyer Thurber is not a name well known to us today, but from the early 1880s until the end of her days some 70 years later, she was the powerhouse for the promotion of music in the United States. She formed the earliest American repertory opera company that travelled the length and breadth of the United States, bringing high-quality performances before the general public. She drummed up funding for and presented a plethora of concerts, operas and tours, underwrote concerts for children and provided scholarships for the talented needy, but her crowning achievement was the founding of the National Conservatory of Music in America, an institution which was open to all applicants—Afro-Americans and women as well as white male students. Married to an industrialist whose wealth sprang from wholesale foods merchandising, this striking, aristocratic, bohemian woman enlisted the support of the most powerful patrons in the land in order to further her noble musical causes—even the likes of Andrew Carnegie and the Vanderbilt family were bent to her will. Through the National Conservatory she trained a crucial generation of composers and performers without whose influence American musical life might not be what it is today. Her National Conservatory achieved the highest status as a training ground for preparing the next generation of professional musicians in America and was described as late as 1955 as retaining ‘a truly brilliant faculty … comprehensive curricula and proved itself a vital force in this country’s musical development. To this day no institute of musical instruction can be said to have surpassed its potentialities.’ In 1891 it became the only U.S. arts organisation ever to be awarded the enormous prestige of a congressional charter.

It was into this rarefied arena that Dvořák was invited, in the Summer of 1891, to become the second Director of the National Conservatory by Mrs Meyer Thurber herself. The salary of some $15,000 a year must have been quite an incentive for the 50 year-old father of six as it was about 25 times that of his annual pay at the Prague Conservatory. But, being little inclined to travel so far from his homeland and family, Dvořák refused, to little avail—Meyer Thurber’s tenacity knew no bounds and within a few months she got her new Director on a two year contract. She was keenly aware of his reputation as a composer with a nationalist bent and was determined that such an esteemed practitioner would be able to identify the building blocks of American music and construct them into a music that might befit a selfconsciously emergent power.

Dvořák arrived in America, into New York Harbour, on 27 September 1892 and, after shaking off the throng of flashbulbs and press reporters, he soon settled down to a splendid working relationship with Mrs Meyer Thurber. As requested, Dvořák only taught the most gifted of composition students, while his presence also attracted national attention, a generously funded prize for ‘American’ composition and a golden period for all associated with the institution. Dvořák did not shirk his own part in establishing a new American music. During his two-year tenure he completed a patriotic cantata, The American Flag, Op 102, the 'American' String Quartet, Op 96, a String Quintet in E flat, the Cello Concerto and, of course, his Symphony in E minor, Op 95, 'From the New World'.

That Dvořák chose a symphony as the main vehicle to fulfil America’s expectations attests to the high-minded seriousness with which he approached the task. As the composer himself wrote about native American music, ‘The fact that no one has yet arisen to make the most of it does not prove that nothing is there’. Harry Burleigh, a student at the National Conservatory, was invited to sing negro spirituals and the plantation songs of Stephen Foster—music which evidently fascinated Dvořák. He also studied transcriptions of music from Native American sources and even visited Buffalo Bill’s Wild West Show for inspiration. Rather than quote melodies verbatim, Dvořák was intent on showing American composers, ‘what path they might take—how they should work’. In an interview published in the New York Herald on 15 December 1893—the day before the symphony’s premiere, Dvořák had this to say:

Since I have been in this country I have been deeply interested in the national music of the Negroes and the Indians. The Character, the very nature of a race is contained in its national music. For that reason my attention was turned at once in the direction of … native melodies. It is this spirit which I have tried to reproduce in my new Symphony. I have not actually used any of the melodies. I have simply written original themes embodying the peculiarities of the music, and, using these themes as subjects, have developed them all with the resources of modern rhythms, harmony, counterpoint and orchestral color … It is written upon the classical models and is in four movements. It opens with a short introduction, an Adagio … This leads directly into the Allegro, which embodies the principles which I have already worked out in my Slavonic Dances; that is, to preserve, translate into music, the spirit of a race as distinct in its national melodies or folk songs. The second movement is a Largo. But it is different from the classic works in the form. It is, in reality, a sketch for a longer work, either a cantata or an opera which I propose writing, and which will be based on Longfellow’s ‘Hiawatha’. The Scherzo of the Symphony was suggested by the wedding feast in ‘Hiawatha’ where Indians dance, and is also an essay which I made in the direction of imparting the local color of Indian character to the music. The last movement is an Allegro con fuoco. All the previous themes reappear and are treated in a variety of ways.

Although much has been written as to how much ‘America’ there actually is in this symphony, it is clear that Dvořák’s intentions were entirely honourable and that his brief stay in the United States did provide the stimulation required to produce a truly great symphony wrought on American soil. The rapturous reception at its Carnegie Hall premiere has been repeated thousands of times across the globe ever since and the work has enjoyed and occasionally endured sustained popularity throughout most popular forms of entertainment. The song ‘Goin’ Home’ may sound like an old negro spiritual, but was, in fact, adapted from the symphony’s slow movement by composer Harry Burleigh, the same student who had sung spirituals to Dvořák. In the UK it is known by a vast swathe of the population through a nostalgic advert for bread. While the Largo may be the most purloined movement, Serge Gainsbourg borrowed a theme from the first movement for his song, ‘Initials BB’ and numerous jazz and film soundtracks have made liberal use of sections of the score. In the realms of literature, Josef Skvorecky’s wonderful Scherzo Capriccioso (Dvořák in Love) is a charming, magical recreation of late-nineteenth-century America, based on Dvořák’s visit.

Less than two years before this massive upheaval in the composer’s life, he was happily hard at work on one of his shortest and perhaps most controversial symphony, No 8 in G major, Op 88 (published in London as Symphony No 4). Dedicated to another institution to which he had been admitted, ' … the Emperor Franz Josef’s Czech Academy of Science, Literature and the Arts', Dvořák’s fame was already such that he conducted performances in Prague, London, Frankfurt and Cambridge. It was criticised by the powerful Viennese critic Eduard Hanslick as fragmentary and by Brahms as lacking in substance. And while the work does not conform to the symphonic norms of the time, it rather takes its cue from Schumann in experimenting with sonata form and is successful in creating a whole from a rhapsodic treatment of linked melodic motifs. This is a symphony marking Dvořák’s first proper venture into the profusion of ideas and effects that, after the Ninth Symphony, became his home ground as a composer—the tone poem. Although not provided with a descriptive title, the sheer diversity and vibrancy of the musical argument makes for a wonderful, diverting entertainment, this time in an entirely Slavic, Old World, vein.