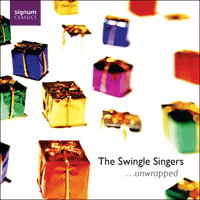 There are few music lovers in this world who haven’t heard the name the Swingle Singers. Since the release of their ground-breaking debut album Jazz Sebastien Bach in 1963, this eight-voice a cappella group has performed in every continent and in the world’s most famous stages, sustaining over four decades a level of international popularity beyond the dreams of its founder, American born Ward Swingle. The current line-up of young, gorgeous and talented singers is, of course, several incarnations of “Swingles” younger than the original team. Ward Swingle affectionately refers to them as his “grandchildren”. What defines this unique group is not the personnel, nor even the choice of music, but the intimate, close microphone, quasi-instrumental sound with which they stunned the world all those years ago. They continue to do so today both live and in the studio. Unwrapped will help to make Christmas an even more special occasion, Swingles-style.

The Christmas repertoire of the current Swingle Singers line-up has for several years been something of a well-kept secret in most parts of the globe. For, in the ten years since the release of A Story of Christmas (SWIMGCD8), the group has made an annual December tour of Japan where their Special Christmas Show has gradually developed a cult following, the same fans turning up year after year, bringing with them increasing numbers of friends and family, to welcome with open arms these eight talented vocalists. For those of us not lucky enough to be in Japan during December, we have rather missed out on this unique experience. But all is not lost! Here, unwrapped for you, is a Christmas present you’ll want to return to year after year. We may not be able to witness the delights of the singers’ infamous choreography nor indeed be dazzled by the stage lighting but we can sit back and enjoy the wonders of the extraordinary voices that remain unmistakeably The Swingle Singers. At times it is hard to believe that every sound on this disc is made buy the human voice—but believe it!

As always with The Single Singers, the constant factor and that which makes them instantly recognisable is the intimate purity of sound resulting from the use of close microphones. This coupled with the use of their voices as instruments, whether directly imitating double bass and drums or evoking a piano arpeggio with startling accuracy of note-placement, agility and perfect blend between voices, gives us that special sound we have come to know and love.

The appeal of this particular recording is in its variety of musical styles: from swung Baroque (Corelli’s ‘Christmas Concerto’) to traditional songs (O Tannenbaum) to big band numbers (Let it snow!) to pop ballads (Joni Mitchell’s River) to Christmas classics (Rudolph the Red-Nosed Reindeer) to ‘80s hits (Last Christmas) to contemporary film music (Walking in the air), this track-listing is rather reminiscent of a Swingle Singers mixed a cappella show. All of the arrangements are by current or recent members of The Swingle Singers. The last track is, appropriately enough, the arrangement with which every single singers Christmas Show closes, the Japanese song Hotaru no Kikari sung to the tune of Auld Lang Syne:

With the light from fireflies and the reflection from snow outside the window
We would read books for months and years;
As the years stole by
On this graduation morning we shall open the door into new years and be parted.

We were pleased to discover that in Japan the tune is widely known although the Japanese version is used in a different context. The words were originally meant to be sung by students at graduation ceremony at the end of a hard year of study. The themes of looking back over the past and saying goodbye whilst preparing to go on to new things have meant that the song is sometimes played by restaurants as a signal to customers that the evening is over and they should go home! In Japan, it brings tears to the eyes of the audience but, whether or not we understand the precise meaning of the words, we cannot fail to be moved by its beauty.