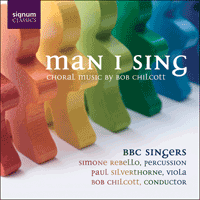 Man I sing & other choral works

The world-renowned choral composer and conductor Bob Chilcott leads the BBC Singers, as well as the internationally recognised soloists Simone Rebello and Paul Silverthorne, in these new performances of some of his best and most loved choral works.

‘He has the knack of exploring highly effective uncomplicated choral devices, and providing both singers and listeners with a complete cycle that leaves them fulfilled yet still prepared for more … It is all splendidly entertaining.

'Be it jazzy, humorous or serious, all the artistic and technical demands of this varied programme are deftly handled by the wonderfully versatile BBC Singers, clearly happy to be working under the composer's baton' (Gramophone)
'Bob Chilcott's music is audience-friendly; no one is better at writing tuneful, rhythmic, fun music, but nevertheless it has a transient air … the BBC Singers give their usual polished performance' (Choir & Organ)» More

I have been composing since the age of fifteen, but it was not really until 1991, when I wrote The Modern Man I sing, that I gained the confidence to imagine that I could have a life where people would be interested in my compositions. Up until then, I had made a career firstly as a singer, and as an arranger and orchestrator for the BBC, and then as a member of the group The King’s Singers, for whom I arranged a good deal of music. At this time I bought a book of Walt Whitman poems and set the poem The runner, and in a fit of enthusiasm sent it to Karle Erickson, the conductor of the Gustavus Choir, one of the fine Lutheran college choirs in Minnesota, who then commissioned the rest of the set. They toured the piece, and made a fine recording, and suitably encouraged, I sent the score to several other people including John Rutter, who introduced me to Paul Keene, an editor at Oxford University Press, who then started to publish some of my pieces. This brought me into contact with the choral world at large, and I suddenly saw an energetic and committed world that I wanted to be a part of. In 1994 I wrote some pieces for the tenor Ben Heppner and Jean Ashworth Bartle’s Toronto Children’s Chorus, and after this I began to get offers of commissions, largely from children’s choirs and good amateur choirs.

I became a full-time composer in 1997 at the time when I wrote The Making of the drum for Michael Smedley and the Oxford Pro Musica Singers for their 20th Anniversary concert. This was also one of the pieces that I did together with the BBC Singers when I conducted them for the first time in 2001, and it was at the suggestion of producer Michael Emery that I later added the marimba part. It was first performed by the BBC Singers and Simone Rebello at the “World Voices” festival on London’s South Bank in 2003.

I wrote My prayer for Jon Washburn and his elegant professional group the Vancouver Chamber Choir in 2000. Jon had an idea to do a concert with his choir as part of Festival Vancouver based entirely on the iconic piece by Henry Purcell, Hear my prayer. There was already a brilliant piece based on the Purcell by the Swedish composer Sven-David Sandstrom, and, using this piece as the basis of the idea of the concert he commissioned three other versions, by two Canadian composers and me. Whereas the Sandstrom piece deconstructs the Purcell, mine eventually comes back to it, but the 5-in-a-bar pulse brings an altered and extended climax to the work.

The Shepherd’s Carol was written for Stephen Cleobury and the Choir of King’s College, Cambridge for their BBC Television broadcast “Carols from King’s” in 2000. The theme of the service was the shepherds as part of the Christmas story, and the beautiful text of this piece was suggested by the then Dean of King’s, Dr George Pattison. It was a strange and wonderful experience for me to hear the piece for the first time, sung by the King’s Choir in the chapel, a choir and a place that together have been such a huge and important part of my musical life.

Pange lingua was written in 2002 for the St Peter’s Singers in Hammersmith, which at the time was conducted by Michael Emery. I wrote the piece for them to sing in Notre Dame in Paris, where they sang one Sunday morning while on tour. The following year I was contacted out of the blue by Amelia Fawcett, an American lady living and working in London who had heard a piece of mine in St Paul’s Cathedral, and wondered if I might consider writing a work as a Christmas present for her parents. The idea was to write and record it in London, and then Amelia would fly her parents over from Boston as a surprise to hear it sung. The resulting piece was written to the poem And every stone shall cry by American poet Richard Wilbur. Robert Johnston, a tenor in the BBC Singers organised a group of singers to record the piece in the Temple Church in London, and the recording was produced by Adrian Peacock, a bass in the Singers. Towards the end of the recording Amelia brought her unsuspecting parents into the church, and we sang the piece for them.

In 2004 I was the twenty-third composer to be commissioned by Martein Fridriksson and the Reykjavik Cathedral choir for their annual “Soli Deo Gloria” festival. I wrote Advent Antiphons for them—a setting of the Great O Antiphons which are sung before the Magnificat over seven days before Christmas. The texts were not designed to be sung all at once, but I have set them here in this way, in a concert setting. The beginning of the plainsong melody appears in different guises at the beginning of each antiphon, and the free voices in the third and fifth antiphon imitate the voices of birds—something that to me reflects Cantus Arcticus a beautiful concerto for taped birdsong and orchestra by the Finnish composer Eino Rautavaara which I love. I was fortunate enough to go to Reykjavik for five days to rehearse and conduct the first performance, and to experience the warmth of the people there, and the beautiful and unique landscape.

I wrote Simple pictures of tomorrow in 2004 for the twenty-fifth anniversary concert of the Manchester Chorale. I found this poem by Paul Eluard in a wonderful translation by Gilbert Bowen, and decided to set it as a double choir piece to reflect the richness of the message of the poem, which is both simple and complex.

Beach is a movement from a larger piece called Songs for Seven Storeys that I wrote in 2004. This was a great project that I was involved in through my connection with Steve Jones and the City Chamber Choir, a fine choir in London of which I am President.

In 2004 a superb new hospital in London, the Evelina Children’s Hospital, designed by Hopkins Architects was opened on the south bank of the Thames opposite the Houses of Parliament. A number of artists were commissioned to make works of art and installations to entertain the children in the hospital, and also other children worked with a storyteller to come up with ideas for themed floors on each level of the building. The poet John Mole and I were commissioned to write a piece based on these themes, and the performers involved were the City Chamber Choir, children from Lambeth Schools and players from the London Philharmonic Orchestra. Beach for solo viola and choir takes its cue from the name of one of the themed floors.

The most recent piece here is Weather report. In 2005 Stephen Cleobury and the BBC Singers were a headline choir at the 7th World Choral Symposium in Kyoto, Japan. I wrote this piece as a virtuoso programme-ender for their programme of English music and I decided to write a jazz-inspired piece based on the most English of themes—the weather.