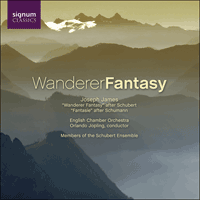 Schubert's Wanderer Fantasy and Schumann's 'Fantasie' are two highly remarkable works: whilst musically embodying the romantic spirit of the age in their unconventional structures and lyrically imaginative styles, they also act as self-portraits to their creators through the evocation of the creative process. In these new orchestrations by 'Joseph James', the familiar beauty of the works is rekindled in the exciting and fresh interpretations performed by the illustrious English Chamber Orchestra alongside concertante solos from members of the Schubert Ensemble. The performances are directed by the exceptional young conductor, Orlando Jopling. Featured instrumentalists from the Schubert Ensemble include Simon Blendis (violin), Jane Salmon (cello), Peter Buckoke and Stephen Williams (double basses).

'The present rewriting, which Schubert and Schumann would have definitely supported, respects the original score most scrupulously, including the pianistic moments which, with a little magic, easily become strong violinist movements. A magnificent work, extremely convincing, which allows the two greatest piano fantasies of the 19th century to be listened to with a different ear' (Abeille Musique, France)

‘Fantasy’ is a musical term that goes back beyond the Baroque to the Renaissance period, and it always implies a liberation of the artistic imagination from fixed forms. In German, Fantasieren is also the word for improvisation, but in the Romantic period a work titled Fantasie indicated that it was in some sense a self-portrait, an evocation of the creative process. The story-teller and musician E. T. A. Hoffmann, who wrote with such insight about Mozart and Beethoven, and who created the archetype of Romantic musician in his fictional Kapellmeister Johannes Kreisler, gave one of his earliest collections the title Fantasy pieces in the manner of Callot (1815), referring to the drawings and engravings of the Baroque artist Jacques Callot: ‘Couldn’t a poet or writer, to whom the figures of ordinary life appear in his inner romantic world of imagination, and who represents them in the glimmering light with which they are surrounded there, as though in a strange, wondrous finery, at least use this master as his excuse and say: I wanted to work in the manner of Callot.’

The musical forms of the early nineteenth century are deeply indebted to the Baroque, with their use of counterpoint and harmonic progression freed from the confined elegance of classsicism, and the two Fantasies recorded here are also portraits of the artist. Schubert’s Wanderer Fantasy in C, composed in late 1822, is a development of ideas from a song he had written six years earlier. That was one of many settings he made of poems on this theme—the stranger who, driven by some inner force, finds himself in an alien country without friends, consumed by a longing to find his homeland and hear his own language. The ‘mountains’ from which he comes suggest both a boundary that cannot be recrossed and a place of spirituality that represents his artistic calling, but his search is in vain; at the end of the song as he sighs ‘where?’, the spirits whisper back to him, ‘There, where you are not, is happiness.’ Schubert’s Fantasy follows the song closely, developing and improvising upon each of its four parts, transforming a brief Lied into a fully fledged quasi-sonata. Both start with a strongly marked rhythmic pattern—triplets in the song that become the dactylic phrase of the Fantasy—and the recitative of the song is translated into an improvisatory movement in which melodic fragments are repeatedly interrupted by the impetuous rhythms of the opening. The simple vocal arioso of the second stanza of the song forms the basis of the Adagio section of the Fantasy, appearing, with excursions from the minor key to the major, some dozen times in different guises with two stormy episodes and much underlying rhythmic and textural variation.

A new musical figure introduces the wanderer’s thoughts of his beloved homeland, paralleled in the Fantasie by a lively transformation of the opening phrase of the work into a dotted rhythm, which engenders the thematic material of what is essentially a scherzo with a meditative trio. The final stanza of the song repeats two lines from the first one, the wanderer’s sigh ‘where?’, while in the Fantasie the rhythmic figure of the beginning of the work returns to be developed contrapuntally in a short finale.

What is so remarkable about the metamorphosis of Lied into Fantasie is not the borrowing of the haunting melody that accompanies the words ‘The sun here seems to me so cold, the blossom shrivels, life is old’, but the expansion of the work into another medium that still retains the ideas and emotions of Schmidt von Lübeck’s poem. Schubert wrote in his diary, ‘The works I create come from my understanding of music and my pain! Those brought about by pain alone seem to please the world least.’

Robert Schumann’s Fantasie in F (Op 17), composed in 1836, has even more directly personal associations, although it was originally planned as a fund-raiser for Liszt’s scheme to erect a monument to Beethoven in Bonn. It was written, along with many of his most passionate piano works (three sonatas, and the Kreisleriana and Nachtstücke with their references to Hoffmann), during a period when he feared he would never be allowed to be united with Clara Wieck, and it is the most direct declaration of his love for her. Schumann, having decided in 1830 to devote himself to music, lodged in the house in Leipzig of the charismatic piano teacher Friedrich Wieck, who was grooming his ten-year-old daughter Clara to become a great virtuoso. The composer was the leader of a group, the Davidsbündler, who wanted to combat philistinism in music, and had founded the influential Neue Zeitschrift für Musik, where he developed the double personality he had devised for himself: Eusebius, the melancholy dreamer, and Florestan, the impulsive and passionate enthusiast.

In April 1836 it dawned on him that he had fallen in love with Clara, still only fifteen, and from this point her father did everything possible to keep them apart. Schumann channelled his feelings into his compositions, frequently taking alternating roles as Florestan and Eusebius. Throughout the Fantasie it always seems clear which of the characters is his mouthpiece. The impetuous opening introduces the principal thematic material of the whole composition, which is based on music Clara had herself written, and the contrasting episodes draw the sequence of notes out into long melodies and also transform it into fragmented rhythmic interruptions. Unlike Schubert, with his seemingly effortless melodic gift, Schumann found the invention of thematic material a great struggle, and he would often start with the notes given by a word or a name (as in the “ABEGG” variations) or phrases from another composer’s work. But then this material would be subjected to every kind of musical fragmentation and manipulation to be integrated into his composition. The overall unity this gives to the diverse melodic and rhythmic patterns in Schumann’s music might be compared to the intense individuality of the composer himself with all his changing moods and shifts of personality.

The first movement contains repeated fiery episodes between passages of calm; at one point the harmony builds up from the bass as in a Baroque organ toccata, leading after interruptions of melody and recitative to a passage that resembles a chorale. Following a curtailed recapitulation, the toccata motif returns to usher in the meditative conclusion to the movement, with its final yearning cadences. The second movement uses off-beat accents to emphasize the energy of the marching pulse, while contrasting episodes introduce a more playful skipping rhythm, and a breathless coda brings back the off-beat accents to generate a furious pace. Much of the final movement belongs to Eusebius, with extended meditations and a long spun-out melody in waltz time (lifted by the 2 against 3 cross-rhythms Schumann favoured so much) that builds up to a twice repeated declaration, which seems to sum up the composer’s sentiments towards his beloved. Finally the thematic material goes through a series of modulations that are resolved in the same aching cadences that concluded the first movement.

Originally Schumann gave titles to the individual movements of the work (first also titled a Grand Sonata), which refer to the monument for Beethoven—‘Ruins’, ‘Trophies’ and ‘Palms’, the last two of which he changed to ‘Triumphal Arch’ and ‘Constellation’—but when it was published in 1839 it was as a Fantasie, with a dedication to Liszt and an epigraph from Friedrich Schlegel that was undoubtedly meant for Clara: ‘Through all the tones there sounds / in Earth’s many-coloured dream / a soft drawn-out tone / for the one who listens in secret.’ She wrote Robert that she was ‘ill with rapture’ after receiving the music from him, and she never performed the work until after his death.

In Joseph James’s versions, which never depart from the originals, the two Fantasies nevertheless take on a somewhat different character. The personal, self-referential character of the solo piano music is given a more general significance in the dialogue between the soloists and the main body of musicians, as well as in the lyrical interplay between the individual players. However, the sense of free improvisation remains: frequently the sound of the soloists matches the characteristic sonorities of the chamber music of both Schubert and Schumann, but the transcriptions, especially when the pianistic passagework is faithfully translated into string arabesques over the body of orchestral sound, also give the works an unmistakably contemporary sound, so that the listener’s sense of familiarity is overlayed with an awareness of hearing extraordinary new music for the first time.