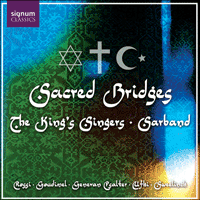 For thousands of years, the biblical Psalter has been the liturgical 'heart' of the three main book religions: Judaism, Christianity and Islam. The Psalms announce the word of God and, simultaneously, contain the full range of human experience.

Jews, Christians and Muslims sing and listen to the same songs of lament and joy, confessions of sin, hymns of praise and adoration. In this project of the King’s Singers and Sarband, psalm settings by composers from three religions give an example of how psalms can be a source of spirituality, a political instrument, a link between tradition and modernity and, above all, a bridge connecting human beings.

'Music can play such an important role in bringing together religions and cultures—which is the self-proclaimed mission of the group Sarband. The Psalms are common to all three Monotheistic religions, so here Sarband have joined the King’s Singers to explore the Psalms as composed by Jews, Christians and Muslims during the 1600s. A fascinating project … altogether a fascinating, attractive, beautifully performed album' (Gramophone)
'I've heard several recordings of his music, and the King's Singers offer the one that is most convincing musically … it is also good to have some amazingly neglected Sweelinck psalm settings. An intriguing disc, and far more than a curiosity' (Early Music Review)» More

Christian, Jewish and Muslim Psalm Settings
From the 16th to 17th Centuries
For thousands of years, the biblical Psalter has been the liturgical 'heart' of the three main book religions, Judaism, Christianity and Islam. The Psalms announce the word of God and, simultaneously, contain the full range ol human experience. They are songs of lament and joy, relations of the acts of God, confessions of sin and hymns of praise. Many psalms are attributed to David himsell and if the latest of the psalms were composed during the Persian and perhaps even into the Hasmonean eras, then the Psalter was compiled over the better part of a millennium of Jewish history before being finalized during the second Temple period. As a part of the Septuagint, they were translated into Greek and found their way into early Christian usage.

Jews, Christians and Muslims sing and listen to the same songs of lament and joy, confessions of sin, hymns of praise and adoration. In this project of the King's Singers and Sarband, psalm settings by composers from three religions give an example of how psalms can be asourceofspirituality, a political instrument, a link between tradition and modernity and, above all, a bridge connecting human beings.

Salamone Rossi Hebreo: Hashirim asher liSh'lomo
(The Songs of Solomon), Venice 1622
At the turn of the 17th century, Vincenzo Gonzaga, Duke of Mantova, led the musical culture of his court to its summit. Among the composers employed by him were Monteverdi, Gasloldi, Wert, Viadana and, from 1587 to 1628, the Jewish violinist, singer and composer Salamone Rossi Hebreo (ca. 1570—ca. 1630). Apart from sonatas and dance music, madrigals, canzonettas and stage music for the court, he also composed music for the Synagogue, for the very reason that they lived in Diaspora, Jews held on strongly lo their traditional Middle Eastern liturgy. Any liturgical or musical innovations—instruments, new melodies, polyphony—were unwelcome for a long period of lime. But also the members of the Jewish congregations in Italy began to lake pleasure in the 'Nuove Musiche' of the Late Renaissance. The efforts of the Catholic Counter Reformation in intensifying the separation between Christians and Jews proved an obstacle, by 1516 the first Jewish Ghetto had already been established in Venice. Vincenzo Gonzaga followed this example in 1612 with the Ghetto in Mantova. As a result, Jews were cut off from Italian culture during one of its heydays. This forced isolation led lo an enormous desire among the Jews for the lost cultural achievements of the Renaissance, for example polyphonic music, which in the Ghetto was confronted with a practical obstacle, the only building large enough for performances was the Synagogue. With his polyphonic works for the Synagogue, which have no musical connection with Jewish tradition, but can easily be integrated into the liturgy, Salamone Rossi sought to unite one last time two worlds drifting apart.

Clement Marot l Theodore de Bèze, Les Psaumes en vers français avec leurs mélodies, Geneva 1562
Claude Goudlmel, Psalmes de David, Paris 1551-1580;
Jan Pieterszoon Sweelinck, Cinquante Pseaumes de David, Amsterdam 1604
During the Reformation, European Christians tried to reintegrate laymen into the liturgy. One method was to translate the Psalms into the vernacular, and set them to simple melodies. The most popular and largest psalm collection, completed in 1562 at Geneva, was a collaborative effort of several people. It was used as The principal liturgical book among the relormed Swiss Christians (Calvinists). The melodies of the Geneva Psalter, also known as 'the Huguenot Psalter', range from tunes with the character of folk songs to chants in ecclesiastical modes. The Genevan Psalter became the most successful hymnbook of all times. Many composers used it as a base for arrangements or independent works.

Ali Ufkî (Wojciech Bobowski): Mezamir {F-Pn Suppl. Lure 4721665-1673)
Protestant missionaries had begun as early as the 16th century to translate Christian texts into the Ottoman language. In the 17th century, Calvinoturcism, which was especially propagated by Jan Amos Comenius (1592-1670), stressed the common elements of Islam and Protestantism, the aim was to unite against Catholic Habsburg. This era was also the reign of Sultan Mehmed IV. (1648-16871, whose rule is considered to represent the first heyday of Ottoman-Turkish music. The Polish church musician Wojciech Bobowski (1610-1675), a native of Lwów, was enslaved by Crimean Tartars at the age of eighteen and sold to the court of Mehmed IV. At Constantinople. There he received an excellent education.

Afler having converted lo Islam, he changed his name lo Ali Ufkî and became interpreter, treasurer and musician al the Sultan's seraglio. Ufkî, who was given lo deeply contemplating religious questions, nol only translated lhe Anglican catechism inlo the Ottoman and later wrote a Latin explanation ol Islam. But also created two manuscript anthologies of Ottoman music, containing sacred and secular pieces, instrumental and vocal music, art music as well as traditional Turkish songs. In a small collection of psalms, Ali Ufkî used original melodies from the Genevan Psalter, classified lhem according to the Turkish modal system and translated the texts into the Ottoman. Because of the peculiarities of French prosody, the Genevan melodies tend to be in asymmetrical meters, which brings them close to an important idiom of Middle Eastern music. Apart from their rhythmical intensity, their modal character makes it easy to transform them into Turkish modes just by subtle shadings of intonation. Ali Ufkî's versions of the psalms are free of the superfluous, no musical embellishments nor artful affects disturb the power of the word. By returning lo the Book of Books, the worlds of Islam and Protestant Christianity, seemlingly so far apart, are united with artistic simplicity in a natural way.

In our performance, we intertwine the compositions of Rossi, Goudimel, Sweelinck and Ufkî in order to recapture the original intention of the psalms, to be sacred bridges between peoples, religions, between human beings.