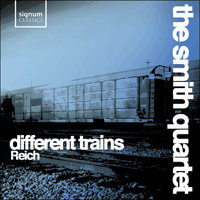 'Written for the Kronos Quartet in 1988, 'Different Trains' is an iconic experiment in applying speech rhythms to music. In three succinct movements, it contrasts the cross-continent trains of Reich's American childhood with the cattle trucks to Auschwitz, using fragmented recollections from three Holocaust survivors, Reich's governess, a conductor, and recordings of the trains. Does it bear re-interpretation? Not exactly, though the Smith Quartet's intense sound re-emphasises the rhapsodic ending of the work. Duet and Triple Quartet are also featured here and are played to perfection' (The Independent)
'This five-star Signum issue, released on September 5, conveys the emotional power or Reich's uncompromising writing' (Music Week)» More

Triple Quartet
Triple Quartet is for three string quartets, all of which on this recording are played by the Smith Quartet.

The initial inspiration for the piece comes from the last movement of Bartók’s Fourth Quartet. While no musical material is taken from the Bartók, its energy was my starting point. While working on Triple Quartet, two other composers found their way into my consciousness. As I was beginning the piece my friend Betty Freeman sent me a CD of the complete Schnittke string quartets. I had never heard a note of his music. In listening to his quartets I was struck by his virtuosity and moved by the incredible Mesto of his Second Quartet. Listening to the ‘density’ of his music goaded me to thicken my own plot harmonically and melodically. Rhythmically, the second and third quartets play in conflicting values partly inspired by Michael Gordon’s Yo Shakespeare. The result, all in all, is a piece considerably fore dissonant and expressionistic than expected.

The piece is in three movements (fast-slow-fast) and is organized harmonically on four dominant chords in minor keys a minor third apart: E minor, G minor, B flat minor, C sharp minor, and then returning to E minor to form a cycle. The first movement goes through this harmonic cycle twice with a section about one minute long on each of the four dominant chords. The result is a kind of variation form.

The slow movement is more completely contrapuntal with a long slow melody in canon eventually in all 12 voices. It stays in E minor throughout.

The third movement resumes the original fast tempo and maintains the harmonic chord cycle, but modulates back and forth between keys more rapidly. The final section of the movement is in the initial key of E minor, and there the piece finally cadences.

Triple Quartet was commissioned for the Kronos Quartet with funds provided by the National Endowment for the Arts, David A and Evelyne T Lennette, Patricia Unterman and Tim Savinar, and Meet the Composer/Arts Endowment Commissioning Music/USA, which is made possible by generous support from the Helen F. Whitaker Fund, and the Catherine Filene Shouse Foundation.

Duet
Duet was composed in 1994 and is dedicated to Yehudi Menuhin and to those ideals of international understanding which Sir Yehudi practiced throughout his life. The piece is approximately five minutes in length. In this version performed by the Smith Quartet it is scored for two solo violins four violas and four celli. Beginning and ending in F the music is built around simple unison canons between the two violins who, from time to time, slightly vary the rhythmic distance between their two voices.

Different Trains
Different Trains, for String Quartet and pre-recorded performance tape, begins a new way of composing that has its roots in my early tape pieces It’s Gonna Rain (1965) and Come Out (1966). The basic idea is that carefully chosen speech recordings generate the musical materials for musical instruments.

The idea for the piece came from my childhood. When I was one year old my parents separated. My mother moved to Los Angeles and my father stayed in New York. Since they arranged divided custody, I travelled back and forth by train frequently between New York and Los Angeles from 1939 to 1942 accompanied by my governess. While the trips were exciting and romantic at the time I now look back and think that, if I had been in Europe during this period, as a Jew I would have had to ride very different trains. With this in mind I wanted to make a piece that would accurately reflect the whole situation. In order to prepare the tape I did the following:

1. Record my governess Virginia, then in her seventies, reminiscing about our train trips together.
2. Record a retired Pullman porter, Lawrence Davis, then in his eighties, who used to ride lines between New York and Los Angeles, reminiscing about his life.
3. Collect recordings of Holocaust survivors Rachella, Paul and Rachel, all about my age and then living in America—speaking of their experiences.
4. Collect recorded American and European train sounds of the ’30s and ’40s.

In order to combine the taped speech with the string instruments I selected small speech samples that are more or less clearly pitched and then notated them as accurately as possible in musical notation.

The strings then literally imitate that speech melody. The speech samples as well as the train sounds were transferred to tape with the use of sampling keyboards and a computer. Three separate string quartets are also added to the pre-recorded tape and the final live quartet part is added in performance.

Different Trains is in three movements (played without pause), although that term is stretched here since tempos change frequently in each movement. They are:

The piece thus presents both a documentary and a musical reality and begins a new musical direction. It is a direction that I expect will lead to a new kind of documentary music video theatre in the not too distant future.

Again all parts on this recording are played by the Smith Quartet. Different Trains was commissioned by Betty Freeman for the Kronos Quartet.

It has become clear in the last 30 years that new string quartets have appeared who have completely changed the nature of what that traditional ensemble was about. The Smith Quartet is at the forefront of this historical change. New repertoire, some of it commissioned by the quartet and the use of various kinds of electronics to expand the very nature of the music they play are all clearly in evidence. I am enormously pleased with the interest the Smith Quartet has taken in my own music wilch has been a part of this sea change in the string quartet literature. Different Trains (1988) introduced prerecorded speaking voices whose speech melody generated the melodie content of the piece. It also introduced an element of music theater into the string quartet literature. Finally, it used prerecorded string quartets in addition to the live quartet to change the single quartet into three or sometimes four quartets all playing simultaneously. This idea was then used by itself, without the use of prerecorded voices, to produce Triple Quartet. The Smith Quartet has made these pieces their own by making their own prerecorded tapes via computer and elegantly performs them here with clarity and intensity.