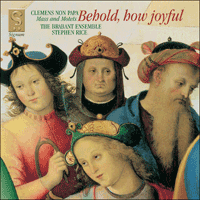 Signum Classics is pleased to present a debut recording by The Brabant Ensemble, an Oxford-based ensemble with a strong reputation for sympathetic performance of early sacred music, focussing on the repertoire of the 16th century.

Like many of even the most prolific and celebrated composers of the sixteenth century, Jacobus Clemens non Papa (‘not the Pope’) has offered the history books little factual material with which to work. In contrast to the paucity of biographical material, however, many sources of Clemens' music survive. Indeed, he is one of the most widely published musicians of the entire century with fifteen Masses, over two hundred motets, many Dutch psalms and French chansons to his name.

This album features the Mass Ecce quam bonum, based on Clemens’ own motet and a generous selection of five-voice motets.

'The individual movements of the Mass are nicely contrasted with, for example, robust duetting in the ‘Et resurrexit’, and a touchingly reflective Agnus Dei. The motets, too, have moments to cherish (‘Accesserunt’ brings out the best in the singers)' (BBC Music Magazine)

'Clemens’s beautifully crafted and mellifluous polyphony, nicely spiced with tellingly placed chromaticisms, is immediately appealing. The Brabant Ensemble generally does it full justice, with its clear, steady tone: the bell-like soprano sound is particularly attractive. The group also gives the music a natural sense of flow, especially in slow and expressive items such as the desolate motet Job tonso capite … a most promising debut album, suggesting the the Brabant Ensemble could have a bright future—especially if, in its enterprising choice of repertoire, it is starting as it means to go on' (The Daily Telegraph)
'They make a glorious sound which may be very English, for want of a better word, but which I found irresistible—Clemens’s mellifluous lines rise and fall beautifully, no one part taking precedence over the others, and all with an ethereal feeling … if you are unfamiliar with this repertoire, do buy this; it will change your life. Those of you who are, don't miss this wonderful debut recording' (Early Music Review)

Like many of even the most prolific and celebrated composers of the sixteenth century, Jacobus Clemens non Papa has offered his modern biographers little material with which to work. His date of birth is a matter of conjecture, the consensus placing it towards the beginning of the second decade of the sixteenth century. It is known that he was employed at the church of St Donatian in Bruges, but only in 1544–5. Circumstantial evidence suggests that he may have worked for Philippe de Croy, the Duke of Aerschot, in the later 1540s. In 1550 he spent three months at the Confraternity of Our Lady in ’s-Hertogenbosch; and there are several more or less tenuous links with towns in the Low Countries thereafter. It seems likely that his death, which was perhaps a violent one, occurred in 1555 or 1556.

In contrast to the paucity of biographical material, many sources of Clemens’s music survive: he is one of the most widely published musicians of the entire century. Not only are fifteen Masses, over two hundred motets, and many Dutch psalms and French chansons extant, but these works frequently went into multiple editions, some of the chansons continuing to be published well into the seventeenth century. Yet even his musical personality is difficult to establish: many pieces are conflictingly attributed, notably to Thomas Crecquillon, a direct contemporary and one whose name may readily have led to confusion with Clemens in the minds of scribes and publishers.

Despite these conflicts, it is clear from the publication record that Clemens’s music was enthusiastically received: this makes the apparent rootlessness of his life all the more surprising, since the most prominent composers almost invariably were granted significant status in courtly or ecclesiastical establishments. It seems that Clemens was unsuited to such a lifestyle, however: the musicologist Henri Vanhulst has recently discovered documents which when published will go some way to explain Clemens’s curious career and indeed his nickname (see Henri Vanhulst, ‘New Documents on Clemens non papa (1553)’, in E. Jas (ed.), Beyond Contemporary Fame: Reassessing the Art of Clemens non Papa and Thomas Crecquillon). Until now, the fact that Clemens was called ‘non Papa’ (not the Pope), and even in one manuscript ‘haud Papa’ (absolutely not the Pope), has been open to multiple interpretations: since there was a Pope Clement reigning during Clemens’s lifetime (Clement VII, Giulio de’ Medici, 1523–34), the composer’s sobriquet may have arisen in his younger days but continued to be used after the death of Clement VII. It is possible also that the name reflected Protestant sympathies on Clemens’s part: indeed, the title of the Mass recorded here, ‘Ecce quam bonum’, was something of a rallying-cry for religious dissenters during the sixteenth century, due to its association with the revivalist Florentine preacher Girolamo Savonarola (1452–1498). Vanhulst’s new information, however, will cast a more prosaic light on the matter.

The Mass Ecce quam bonum is based on Clemens’s own motet: as is quite frequent at this time, the number of voices is reduced by one between motet and Mass, with the Kyrie, Gloria and Credo movements of the latter being in five parts. However, an extra voice is added from the Sanctus onwards. Many imitation Masses add one or more voices for the Agnus or the second Agnus invocation, but so early an expansion of texture is highly unusual. The added voice does not duplicate the lowest range, as in the motet, but the tenor, and forms a canon at the unison with the existing tenor voice. This technique is particularly effective in the Osanna, where the length of the phrases is at times the same as the delay between the two canonic voices, giving the impression of antiphony.

The motet sets Psalm 133, ‘Behold, how good and joyful a thing it is: brethren, to dwell together in unity!’ In it the psalmist constructs an extended simile between the life of a happy community and refreshing liquids: first the precious ointment running down Aaron’s beard, and subsequently dew falling upon the hill of Sion. The mention of Sion allows a return to the original theme of God’s benediction on those who lead a peaceful life. The imagery in this short but vivid text offers plenty of scope for the composer to create musical parallels, of which Clemens takes advantage in both motet and Mass. The ointment running down Aaron’s beard is illustrated with a sequential motif falling in thirds and employing cross-rhythms, which frequently recurs in the Mass, usually towards the end of sections such as the second Kyrie. A different falling motif is chosen for the dew of Hermon, this time descending by step. It has been observed also that the unison canon between the two tenor parts in the Sanctus and Agnus Dei reflects the opening of the text (Alejandro Planchart & Willem Elders, ‘Clemens non Papa, Jacobus’, in The New Grove Dictionary of Music and Musicians, Second Edition ed. S. Sadie, 29 vols. (London: Macmillan, 2001), vi, 29.).

Apart from that on which the Mass setting is modelled, all of the motets on this album are in five parts, though their textures are varied, with each of the standard SATB voice ranges doubled on at least one occasion. Pascha nostrum (SATTB) sets the text of the Easter Anthems; although musically the motet is in responsory form, with each section ending identically, only the closing ‘alleluia’ music is repeated, and the motet is best thought of as a paraliturgical piece for Eastertide. The Song of Songs motet Veni electa mea (SATBB) also adopts a novel approach to musical repetition, with the phrase ‘quia concupivit rex speciem tuam’ (for the king has desired your beauty) repeating approximately ten bars of music, but here the second ‘alleluia’, although melodically similar to the first, adopts triple time, with complex cross-rhythms. The motet as a whole is highly characteristic of mid-sixteenth century spirituality, with the eroticism of the Song of Songs harnessed to provide a metaphor for the Church as bride of Christ.

Accesserunt ad Jesum (SSATB) shows an entirely different approach to text from the majority of Clemens’s works (it is attributed in one of its twelve sources to the minor composer Pieter Maessens). Whereas like most of his contemporaries Clemens typically writes full textures, making his musical effects by subtle variations in harmony and melodic decoration, with tight control of dissonance, here the text is projected sharply by means of contrast between upper and lower voices; the piece is also unusual in falling into three sections, the middle of which (here taken by three solo voices) introduces Jesus’s admonition to the Pharisees concerning the estate of marriage. In the final section, more direct word-painting follows, as the phrase ‘twain shall be one flesh’ is set to a rhythmic duet. A similarly immediate approach to word-setting is evident in the highly emotive narration of Job accepting his many trials, Job tonso capite (SAATB), with sudden homophony at ‘adoravit et dixit’ (worshipped and said), and a falling phrase setting ‘corruens in terram’ (fell upon the ground). The texture in general is much more characteristic of Clemens than that of Accesserunt ad Jesum, however.

The final piece on this recording, Carole, magnus eras (SSATB) is a secular work: a state motet addressed to the Holy Roman Emperor Charles V and his son, Philip II of Spain. As mentioned above, Clemens was not directly employed by Charles or Philip (so far as is known), so it seems likely that the dedication arose through the composer’s connection with Philippe du Croy, a lieutenant of Charles. Since the text celebrates the achievements of the Emperor but promises even greater things under his son, it was probably composed at the time of Philip’s investiture as Regent of the Low Countries in 1549. Clemens takes full advantage of the presence in the text of the Imperial motto ‘plus ultra’, with the top voice reaching and finally surpassing the highest note in its range as the motto is stated twice in homophony.