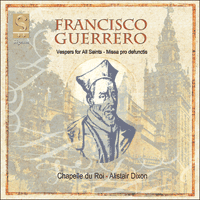 Requiem & Vespers for All Saints

Francisco Guerrero was the most widely known and respected composer in Spain during the second half of the sixteenth century. In our time, he has been overshadowed by Morales, a generation older, and by Victoria, Guerrero’s junior by some twenty years. If, now, we esteem Victoria as the supreme master of the era, it is partly because his works have long been published and widely performed. Guerrero’s much more varied legacy of music is still awaiting complete publication; the majority of what has been printed in modern editions has come out only in the last twenty years.

This much loved composer died on November 8th, 1599, at the age of seventy-one, having served at the cathedral of Seville for most of his life. His influence was widespread in Spain, Portugal and the New World. For more than two centuries his works were copied and re-copied, adapted and imitated. Some of his finest motets were taken by his juniors and by much later successors as models for masses; his Magnificats became paradigms for a century after his passing.

Most modern attention, at least from performers, has been devoted to his exquisite motets and Marian antiphons, also to some of his masses. The programme offered in this recording by Chapelle du Roi concentrates on two other types of composition which are inseparably bound up with the traditional liturgical chants as practised in Spain. The forms and melodies of these, plainchant or mensural chant, their manner of recitation and repetition of the texts, completely control the musical outcome and determine the composer’s overall structures and most of the formal detail. The chant melodies permeate the music at almost every moment.

The Psalms for the Vespers of the Feast of All Saints (November 1st) begin with two, Dixit Dominus and Confitebor tibi, Domine, that Guerrero set intending alternate verses to be sung to simple polyphony incorporating the recitation tones of psalmody, the first to Tone I, the second to Tone VII. The choice of tones is dictated by the modes of the antiphons associated with the psalms on a particular Feast. The third psalm, Beatus vir, is here performed in chant only, to Tone VIII. The fourth, Laudate pueri Dominum, is sung with its even-numbered verses rendered in fabordón—a method in which simple chords and a cadence are adapted to the words, verse by verse, not unlike the Italian falsobordone or the later development of Anglican chant. This example is by Guerrero’s younger friend Rodrigo Ceballos. It is based on Tone VIII but with a different termination (verse ending).

The last of the five psalms for All Saints at Vespers is Guerrero’s shortest, again in Tone VIII. Its doxology, Gloria Patri…, swings into triple time, a lively ending. Indeed, Guerrero’s last verses in his psalms are always impressive in various ways. The close of Dixit Dominus requires the choir to expand to six voices and Confitebor goes to five from the standard four. These are not exceptional procedures, but Guerrero’s variety and subtlety within a self-imposed discipline of conciseness and total commitment to the plainchant melodies show why his Vespers music was so admired, used and emulated in the Hispanic world.

In the celebration of Vespers, two other important texts are usually set to follow the psalms, the Hymn and the Magnificat. The hymn text, usually of five to seven verses, was designated for the liturgical occasion, saint’s day or other feast—in the present programme, All Saints—and it was customary for alternate verses to be sung by the opposite ‘sides’ of the choir, antiphonally. Polyphonic singing was widely used, though often instrumental intervention was allowed by the resident wind band of shawms, cornetts and sackbuts or by the organ. Guerrero composed a cycle of twenty-three hymns for Vespers of many of the important Feasts or regular uses during the ecclesiastical year. In these he employs quite elaborate polyphony.

Following the splendid examples of Morales and Costanzo Festa, as well as Sevillian precursors like Escobar and Peñalosa, Guerrero preserves the model, evolved in the fifteenth century, in which the plain (or mensural) hymn tune was always present in one voice or another. Sometimes it is quoted literally; often it is stretched, ornamented or varied, but it is always clearly heard. The All Saints Vespers hymn Christe, redemptor omnium is one of Guerrero’s finest in this form.

The climax of Vespers is the invariable text of the Canticle of the Blessed Virgin, the Magnificat. This joyful song has had the attention of composers of all periods from the late Middle Ages to our own time. It seems to bring out some of their most happy and shining music. Perhaps Guerrero’s setting on the Fourth Tone is more subdued than others, but it has in its minor key a haunting quality that is enhanced by the sharp accidentals which colour the recitation tone not only in Guerrero’s polyphony but in the chant. This is a sixteenth century Spanish twist to the Fourth Tone, one that is clearly notated in a number of contemporary chant books like the Intonarium Toletanum (1515) and, notably, in the plainsong tutor (Breve instrucción de canto llano—Seville, 1565) published by Luys de Villafranca, Guerrero’s colleague for many years as plainchant master at Seville Cathedral.

All the Vespers music comes from Guerrero’s Liber vesperarum (Rome, 1584) and it is from his own printed intonations and from the evidence of Villafranca that we know of the semi-mensural method of psalmody in Spain. This is well documented in both theoretical and practical books from around 1450 to 1890. It requires us to abandon the plain method of modern times (e.g. Solesmes), instead prolonging many strong syllables, shortening others. It is what Guerrero would have expected.

After the Vespers music, Alistair Dixon chose a beautiful motet for Palm Sunday to serve as an interlude, a point of repose before performing the Requiem Mass. O Domine Jesu Christe is an extra-liturgical text in which the wounded Saviour is adored upon the Cross. Guerrero treats it with tragic expression. It has become one of his best loved pieces. He set the text twice; the present version is that of 1570, later reprinted. A quite different setting was published in 1589.

Polyphonic composition of the Requiem Mass (Missa pro defunctis) was late to develop. The Ordinary—Kyrie, Sanctus, Benedictus and Agnus Dei—were standard texts throughout the Western Church, though not all composers would set all of them; Ockeghem’s has only a Kyrie, at least as it now survives. The composers of the sixteenth century usually set the words of the Ordinary and of the Proper—Introit, Gradual, Tract, Offertory and Communion—although these varied in text and in melody from country to country, indeed from one diocese to another. As a result of the reforms of the Council of Trent these were standardised for all the diocesan uses of the Roman Rite and the Sequence—Dies irae—was required. These new disciplines were enshrined in the Roman Missal issued by Pius V in 1570.

The new Missal was accepted at Seville in January, 1575, due preparation having been made for its adoption. Guerrero dutifully revised his setting of the Mass for the Dead. This new version was published in 1582. The composer made a few small changes to the movements that could be preserved, though he completely changed the Benedictus. Now obsolete texts had to be removed, others changed to conform with the Roman texts. Inevitably, it is the 1582 version that is better known and more likely to be performed.

The present recording presents Guerrero’s unreformed Missa pro defunctis, printed in Paris in 1566; it follows the pre-Tridentine use of Seville. Throughout, Guerrero bases his music on the plainchant melodies, clearly placed in one voice or another, more often in the top, always audible. These are always traditional Hispanic melodies or, at least, Hispanic variants of those in general use. The Tract is given twice: one is specified in The Seville Missal for the obsequies of members of the clergy, Sicut cervus and its verse Sitivit anima; the other is specified for use in Paschal Time, Dixit Dominus: Ego sum resurrectio. The latter has been performed at the end of this recording. The Offertorium—Domine Jesu Christe—is unreformed, using the phrase ‘ne cadant in obscura tenebrarum loca’ rather than the succinct ‘…in obscurum’ of the 1570 Missal. Guerrero did not compose music for the two lengthy verses Hostias et preces and Redemptor animarum specified in the Seville use. We have supplied the first of these in plainchant (from a Processional book of 1563) so that the verse and the repeat of Quam olim Abrahae are properly observed.

The settings of the Sanctus, Benedictus and the three-fold Agnus Dei are given in the unrevised versions. They are followed by what many may find a surprise. Lux aeterna, the Communion (Guerrero calls it Communicanda, a term long used in Spain), begins and ends with the familiar words but contains a late medieval verse, widely used until the reforms; it may be found elsewhere including the English Sarum Use. Guerrero set this Communion twice, for four voices and then for five. He did the same thing to the reformed text when he came to write his revised Mass for the Dead (1582). Both of the 1566 versions are sung by Chapelle du Roi before the Dismissal, following that with the alternative Tract for Paschal Time. Thus all Guerrero’s music for his pre-Tridentine ‘Requiem’ is presented here.

The music’s cool beauty, the unpretentious proportions and the calm unfolding of the ancient melodies to the venerable texts reveal Guerrero’s approach to his art as devout and contemplative. There is a stillness and ceremonial formality about it, characteristics that may have become lost in the world of zealous passions in the times of religious conflict.