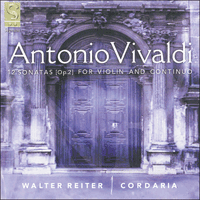 12 Sonatas for violin and continuo Op 2

Traditionally known as the composer of the Four Seasons and the Gloria, the work of Cecilia Bartoli has shown that lesser-known works of the red priest from Venice can become hit records too.

Now Signum Records are delighted to introduce an album on period instruments of the 12 Violin Sonatas, Opus 2. Cordaria features internationally-renowned baroque violinist Walter Reiter, "an artist who transcends authenticity to enter the universal" as one critic wrote, and an eminent continuo team of harpsichord, cello and theorbo.

Written in 1708, just before the 'L'estro armonico' concertos, these sonatas contain all the passion and the virtuosity, all the lyricism and emotion, which have made the concertos so eternally popular. In the words of the great Vivaldi scholar Michael Talbot, "Op 2 is fully Vivaldian and certainly deserves to take its place among his other masterworks."

'These are intelligent but natural accounts of the unfairly neglected music, in which any points the players are out to make are about the music and not themselves' (Gramophone)
'This is mature if not sensational playing that brings the music to life with interpretations that will hold up very well over time' (Classics Today)» More
'[Walter Reiter ] plays with real ardor and gusto. This is exemplary for showing what can be done with a baroque violin, some fine continuo players, and plenty of spunk' (The American Guide, USA)» More

The twelve published collections of instrumental music that Vivaldi committed to print between 1705 and 1729 are dominated by concertos. Only three collections, all of them dating from the first half of his career, contain sonatas. These are Op 1 (1705), containing twelve trio sonatas, Op 2 (1709), containing twelve sonatas for violin and bass, and Op 5 (described as the 'seconda parte' of Op 2 and dating from 1716), with four violin sonatas and two trio sonatas. Vivaldi continued to write sonatas well into the 1730s, but preferred, for economic reasons, to sell them privately to individual customers.

The predominance of sonatas over concertos in the medium of print at the outset of Vivaldi's career is easily explained. First, the sonata was a well-established genre, and one on which it was traditional for an apprentice composer to 'cut his teeth'. Second, the concerto was not yet firmly established: Vivaldi's own Op 3, L'estro armonico (1711), was to prove a turning point in the acceptance of the genre, particularly outside Italy. Third, the great expense of publishing concertos, for which a minimum of five partbooks was required, acted as a significant deterrent, in an age when most music publishing took the form of what we today call 'vanity' publishing (or, more kindly, 'private' publishing): in other words, when the composer himself had to foot the bill.

By 1708 Vivaldi (1678-1741) was an established figure on the Venetian scene. Since 1703 he had acted as teacher of the violin, and effective director of instrumental music, at the Ospedale della Pietà, the celebrated institution for foundlings that boasted a world-famous orchestra and choir recruited from its female residents alone. A chronic illness, usually identified as asthma, had prevented him since 1706 from officiating as a priest at Divine service, but that only channelled his energies more firmly into music. His first published collection had achieved a measure of success, and he was already beginning to match the eminence of his father, Giovanni Battista, as a virtuoso on the violin. The time was ripe to offer the public a new collection.

In late 1708 the Venetian publisher Antonio Bortoli advertised, as in the press and about to appear, a collection of twelve sonatas for violin and cello by Vivaldi. Although less common than violin sonatas with simple continuo accompaniment, duo sonatas for violin and cello alone were not at all unusual for the period; good examples are Torelli's Op 4 (1688) and Dall'Abaco's Op 4 (1716). At this stage, Vivaldi had evidently not decided on the recipient of the dedication. To find a suitable dedicatee was nearly always a prime task for a composer, since the 'recognition' that the former customarily conferred on him in exchange for the dedication—in cash or kind—was a significant factor in his economic calculations. A suitable person presented himself almost by accident. At very short notice, the King of Denmark, Frederik IV, descended on Venice to enjoy the pleasures of Carnival, arriving on 29 December. Ever the opportunist, Vivaldi managed to rush out the publication before the king's departure on 6 March 1709, paying him the usual fulsome compliments in a hastily compiled dedication. History does not record whether the 'recognition' was commensurate, and Vivaldi is not known to have come into contact with Frederik again.

As published by Bortoli, the Op 2 sonatas were not quite what the earlier advertisement would have led purchasers to believe, since they are now billed on the title-page as being 'a violino e basso per il cembalo'. ('Cembalo' means, literally, 'harpsichord', but the word was often employed in Vivaldi's day as a catch-all term in reference to the continuo instruments as a group: thus one or more cellos, and/or plucked instruments (lute, theorbo etc.), in addition to the harpsichord proper.) The works have now become—at least, ostensibly—conventionally scored violin sonatas. Perhaps Vivaldi felt that it was too restrictive, and might harm sales (or displease his royal patron), to retain the original scoring. Be this as it may, the sonatas are not really transformed in substance, only renamed. No other collection of Vivaldi sonatas (or concertos, come to that) has so active and so thematically important a bass part. Even if replaced or augmented in actual performance, the cello remains, in sound and technique, its ultimate inspiration.

In 1712, the sonatas were republished, now elegantly engraved instead of being typeset (a cumbersome process often producing unsightly results), by the Amsterdam firm of Estienne Roger. Vivaldi himself may well have personally entrusted Roger with this new edition, having one year earlier, in a foreword to his Op 3, disparaged the music printers of his native city. The Bortoli edition completely lacks figures for the bass. This is consistent with its original conception for the duo medium, and, in any case, Italian composers usually trusted accompanists who had sight of the music in score to improvise harmonies without the aid of figures. Roger's edition, in contrast, is full of such figures. Vivaldi himself may have added them by request; or some anonymous musical consultant may have carried out the task in Amsterdam. A few years later, the London publisher John Walsh 'pirated' Roger's edition.

Curiously, although Bortoli's advertisement referred to the sonatas as 'Opera seconda' (Op 2), the title-page of his edition leaves out this description. The omission, which Roger and Walsh rectified, must be accidental and carry no wider implication.

Like every Italian composer of his day, Vivaldi was under the shadow of Arcangelo Corelli when he wrote these sonatas. In 1700 Corelli had produced his Op 5, a 'classic' collection of violin sonatas that provided a model of form, style and taste. The last six of Corelli's sonatas are cast in the 'Chamber' (da camera) mould, that is, the majority of the three or four movements are dances (variously allemanda, corrente, sarabanda, giga and gavotta), although the introductory movements (labelled Preludio), as well as a few slow internal movements, are abstract in character. Vivaldi takes over this formula, although he permits himself a little more variety in the abstract movements. For instance, the second sonata opens with a 'Preludio a capriccio' (a composite movement in which cadenza-like passages alternate with slow sections—modelled on that in the first of the preceding 'church' sonatas in Corelli's Op 5). However, the 'Capriccio' movements in the ninth and twelfth sonatas and the 'Fantasia' in the eleventh sonata, for which Corelli offers no direct precedents, are all in the style of a perpetuum mobile. In general, Vivaldi stretches the boundaries of each dance-type, and also of the preludes, to the limit. This is music to listen to, not an accompaniment to actual dancing. It is symptomatic that he does not observe the conventional sequence of dances as practised on the dance-floor. Thus a giga (traditionally a closing dance) may as readily precede a corrente as follow it.

Vivaldi uses the 'active' bass line for various purposes. Sometimes its role is decorative rather than thematically relevant, as in the see-sawing notes at the start of the Allemanda in the fourth sonata. At other times, Vivaldi engages the bass in the motivic discourse, using it to answer the violin imitatively, almost in the manner of a Bach two-part invention. This is the case in the superb Preludio of the ninth sonata, in which treble and bass alike move in spacious, eloquent phrases. The Preludio of the third sonata illustrates another important point about Vivaldi's style: there is no essential difference between 'themes' and 'figures'. What is employed as a pithy accompanimental phrase in one place will appear elsewhere in the same movement as a building-block contributing to a wide-arching melody.

By the standards of Op 3 and later works, Vivaldi's Op 2 is unquestionably 'immature'. But one must use this word carefully. If it is not quite the Vivaldi of The Four Seasons, it is at least strikingly different from Corelli and all other immediate predecessors. Its musical language is already fully 'Vivaldian', even though it represents a phase in the composer's creative life that lasted only a few years. It certainly deserves to emerge from the schoolroom (to which it has in the past all too often been confined) to take its place among his other masterworks.