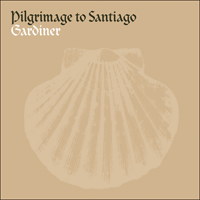 'It is superbly sustained, a performance of intense and mature contemplation, with carefully balanced dynamics, strength and vigour. Highly recommended' (Gramophone)
'This is an anthology that has been compiled with scrupulous care. It’s beautifully varied and exquisitely sung' (The Guardian)

From about the eleventh century, Santiago de Compostela became one of the principal pilgrimage sites of medieval Europe. Legend held that after the Apostle James was slain by Herod’s soldiers his remains were brought by boat to Galicia in the north-western corner of Spain and were miraculously rediscovered there in the early ninth century, the spot being marked by a celestial omen, the ‘field of stars’ recounted in Charlemagne’s vision of the saint’s tomb at ‘the ends of the earth’ (Finisterre). The Christian kings of the Asturias found in James a champion for the reconquest of their lands from Islamic occupation, and as the frontiers were pushed back the way to Santiago was opened up to pilgrims from all over Europe who brought with them their own customs and their own musics, and who encountered an elaborate and solemn cult of the saint in the great Romanesque cathedral built on the site. Elements of the shrine’s long history, as well as details of the highly developed liturgical ceremonies surrounding it, are found in the twelfth-century Codex Calixtinus or Liber Sancti Jacobi (‘Book of St James’), a collection of sermons, miracles (including Charlemagne’s legendary vision) and liturgical texts and chants compiled over a decade from about 1130. In effect it is a pilgrim’s ‘compleat’ guide, providing detailed information on the routes to the shrine through France and Spain alongside music for the celebration of the saint’s feast on 25 July.

The first book of the Codex Calixtinus includes the chant for Vespers and a Vigil Mass on the eve of the feast day, as well as for the Mass, solemn Vespers and other offices held on 25 July itself. The polyphonic items, mostly for two voices, are copied at the end of the fourth book, and include reworkings of some of the monophonic responses and alleluias from Book 1. This polyphonic repertory is a compilation of different works that probably originated from various places along the pilgrimage route, and affords a fascinating insight into the distinctive musical styles and genres that pilgrims would have encountered along their journey. The origin of the polyphonic pieces falls mostly between the Aquitainian and Parisian schools with examples of both organum and conductus, notably the three-voice Congaudeant catholici attributed to Albert de Paris, chapelmaster for some thirty years at St Stephen’s Cathedral in Paris in the midtwelfth century. The chant Dum Pater familias was essentially a hymn to encourage pilgrims along the route to Santiago, though its six verses, four of which are heard here, include a useful mnemonic for the Latin declension of Jacobus.

But art music from northern Europe would not have been the only music heard by pilgrims to Santiago and a description in the Codex Calixtinus itself reflects something of the cosmopolitan musical life of the city: ‘It is a source of wonder and gladness to see the choirs of pilgrims in perpetual vigil by the venerable altar of St James: Teutons in one place, Franks in another, Italians in another … Some play the cittern, others lyres, drums, recorders, flageolets, trumpets, harps, fiddles, British or Welsh crwths, some singing with citterns, others accompanied of divers instruments.’ Pilgrims to the Marian shrine at the Benedictine monastery of Montserrat similarly danced and sang for entertainment and some of their music—both monophonic and polyphonic—was written down in the fourteenth-century manuscript known as the Llibre Vermell (‘Red Book’) still preserved in the monastery today. Many of these pieces have a markedly popular feel, with simple but highly memorable melodies, and no doubt there was always this mix of more elaborate music, sung by the clergy and chaplains of the great churches along the route, and the improvised melodies of the pilgrims themselves who travelled with their instruments to provide evenings of entertainment along the way. The Codex Calixtinus and the Llibre Vermell afford a glimpse of the different sounds that inspired or entertained the weary and footsore, shell-bearing pilgrims who had embarked on this arduous but spiritually rewarding journey.

The cosmopolitan nature of this early repertory is an important reminder that the Spanish kingdoms were never quite as isolated as they have often been perceived over the course of history. The pilgrim ways were important lines of communication, becoming trade routes along which travelled a constant flow of goods and people from outside Spain, and through which networks were established of musicians seeking positions as singers and chapelmasters in the different ecclesiastical institutions that sprang up all over the peninsula with the inexorable push of Catholicism to the south. These institutions in turn looked to Rome—itself a major centre of pilgrimage—for aspects of their administration and liturgy, and travel to Rome among Spanish clergy reached an unprecedented intensity during the Council of Trent in the mid-sixteenth century. These visits, whether as part of personal pilgrimages or ecclesiastical business, resulted in the transmission of polyphonic repertory from Rome to Spain, much of it acquired in printed form and subsequently donated to and used in the Spanish cathedrals and collegiate churches with the professional musical resources to perform it. Works by Palestrina and Lassus were acquired in this way and printed partbooks containing their music are still extant in cathedral libraries in Spain, albeit in dilapidated and incomplete form. The works of Palestrina in particular were copied and recopied well into the eighteenth century: motets such as Jesu rex admirabilis clearly formed part of the staple musical fare of these institutions over many years.

Spanish musicians also travelled to Rome to further their careers by singing in the papal chapel and other Roman churches, and as early as the 1430s, when Guillaume Dufay was a member of the papal chapel, the ‘Spanish nation’ had already established a presence, Spanish singers serving alongside some of the best Franco-Netherlandish musicians of the early Renaissance. A few generations later the Spanish-born Cristóbal de Morales spent many years in Rome and his music, like that of his compatriot Tomás Luis de Victoria, is often considered more representative of an international, Rome-based polyphonic idiom than of a specifically Spanish style. Morales was as polished a contrapuntalist as any of his North European contemporaries, yet local or indigenous elements can still be found in his works, as, for example, in his austere setting of the responsory Parce mihi Domine from the Office of the Dead. Victoria, too, made his career in Rome, and his Mass O quam gloriosum, published in Rome in 1583, is a relatively free parody of his inspired four-voice motet setting the text of the antiphon for All Saints’ Day. And it should be remembered that Spanish composers did not have to make the pilgrimage to Rome, nor base their careers there, to be aware of music from other cultures. With the accession to the Spanish throne of Charles V in 1516 Flemish singers were to predominate in the royal chapel, and its repertory was inevitably international: works by the leading composers from France, Flanders and Italy, including Jean Mouton and Clemens non Papa, feature in the inventories of the chapel library and in the anthologies of vihuela and keyboard arrangements by court-based instrumentalists such as Miguel de Fuenllana and Luis Venegas de Henestrosa.

There can be no doubt that many of these canonic works of the Renaissance found their way to and were performed at Santiago Cathedral. After the advent of music printing, transmission of the international musical repertory to the most north-western corner of Spain would no longer have been largely dependent on the travels of individual pilgrims, although those who continued to flock to the altar of St James would surely still have taken their music and their instruments with them. Printed music books travelled along parts of the pilgrim routes as they were transported to the major book fairs in Burgos and other Castilian centres. The movement of peoples in search of spiritual fulfilment brought with it opportunities for cultural exchange and commerce, as well as for music-making, whether for the purposes of devotion or just for simple enjoyment.

The medieval concept and practice of pilgrimages stretching over months or even years—to Jerusalem, Rome or Santiago de Compostela—sits uneasily with today’s package tours and motorised travel.

For the original pilgrims, though the destination (both physical and metaphysical) was important, the journey was the thing, with all its physical hardships, the hazards along the way and the shared experience, occasionally violent but mostly convivial. Today there are less onerous, probably safer and certainly faster ways to visit the magnificent abbeys, priories and cathedrals that criss-cross southern France and punctuate the various routes through northern Spain. Yet something is missed if we are accorded only the briefest of glances before the tour guide summons us on to the next step in the itinerary. Medieval men and women had the time to become absorbed, the capacity to be enraptured. Perhaps they were more content to live in the present, without one eye constantly on the clock or hour-glass but with both eyes fixed on the matter in hand. Our own experience of these once vibrant buildings becomes generally less vivid the more the heritage industry takes them over—until, that is, they are once again filled with music. Music, from its Gregorian roots to the great flowering of a cappella polyphony in the fifteenth, sixteenth and early seventeenth centuries, has the power to re-ignite these churches, to recharge batteries flattened by over-use and the seeping away of cumulative prayer. For some it may offer a substitute for lost piety and the intense faith of earlier pilgrims. For others it can provide a feast for the ear as well as the eye, and spiritual refreshment of a kind that is rare in a world of fakes and facsimiles.

Many of the projects that the Monteverdi Choir has undertaken over the years have started out by matching music with historic architecture—with the singing of Monteverdi’s Vespers in Cremona, Mantua and Venice, Bach cantatas all over Saxony and beyond, Bruckner motets in St Florian. In 2004, the choir’s fortieth anniversary year, we undertook a pilgrimage in song along the oldest and most famous of the pilgrimage routes, el camino de Santiago. Our journey started at midsummer high up on the wild Aubrac plateau in south west France, before descending to the matchless beauty of Conques, the fortified cathedral of Rodez and the Cistercian abbey of Loc-Dieu. We then continued across the Pyrenees and along the ‘French route’ through Aragon, Navarra, Rioja and Castilla y León to Galicia and Compostela itself. This recording, made after our return to London, is an opportunity to share our experience of living inside the music along the route, reproducing the sequence of processional entries, pilgrim chants and antiphons which preceded and interspersed the glorious polyphony we sang in the French and Spanish churches. As individuals we all had different reasons for undertaking this journey—in body, mind and spirit. But there was a common quest in the music, with all the technical tests and interpretative challenges it posed, as well as the intoxicating beauty it provides. As the pilgrim patois goes, ‘E ultreya e suseya, Deus adjuva nos!’.