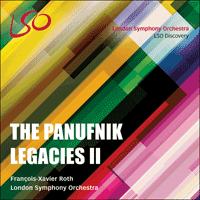 A second album of new works by emerging composers, all of whom have been members of the Panufnik Composers Scheme which each year offers the opportunity to write for the LSO.

'There are plenty of imaginative sounds in The Panufnik Legacies, a CD from the LSO showcasing works by young composers' (BBC Music Magazine)
'The Panufnik Legacies is an extremely valuable release, demonstrating the London Symphony Orchestra’s commitment to contemporary music, François-Xavier Roth’s dynamic and committed conducting, and that music being written right now is in very good health' (Classical Source)

LSO Discovery
Founded in 1990 LSO Discovery is recognised as one of the world’s leading music education and community programmes. It reaches 60,000 people a year, of all ages, backgrounds, and levels of experience, and brings the musicians of the London Symphony Orchestra into creative contact with a wider public.

LSO Discovery offers inspiring musical experiences to people who have not necessarily had much contact with classical music and musicians. It also provides support and training for emerging young instrumentalists, conductors and composers, and gives insight into music for members of the public who would like to know more. LSO Discovery’s work is captured and disseminated digitally, enabling music lovers, learners and teachers worldwide to engage with the Orchestra through video masterclasses, live streamed events and award-winning interactive application LSO Play.

Based at LSO St Luke’s, a renovated Hawksmoor church, LSO Discovery’s community programme includes Shake Rattle and Roll for under-5s, a community gamelan, Digital Technology Group, Create for adults with learning disabilities, and free informal lunchtime concerts. St Luke’s is also the home of Soundhub, a laboratory for up-and-coming composers working across a range of genres, offering access to resources and support from industry professionals and LSO musicians.

The Panufnik Composers Scheme reached its tenth birthday in 2015, and since 2005 LSO Discovery has commissioned works from 167 composers.

To find out more visit lso.co.uk/lso-discovery

Panufnik Composers Scheme
Each year since 2006, following on from an earlier pilot project, six composers have been chosen from a long list of applicants to the LSO Panufnik Composers Scheme. Their task is to write an orchestral piece of approximately three minutes’ duration to be workshopped by the LSO in a dedicated session. Throughout the year they have contact with the orchestra and with individual players, and are invited to attend rehearsals and concerts as often as possible. A real relationship develops, which continues beyond the scheme itself, so that we feel that a ‘Panufnik family’ has been established. With the remarkably generous backing of the Helen Hamlyn Trust, the patronage of Camilla Panufnik—whose active participation has been an essential part—and the indispensable contribution from the start of the wonderful François-Xavier Roth, the scheme has grown ever stronger as it has developed. Including further specific LSO commissions, nearly 80 composers have had the remarkable opportunity to work with one of the world’s great orchestras over the past 10 years: an achievement to be inordinately proud of, and one that sets an example for others to follow.

This second recording of music by composers who have taken part in the scheme includes works written for the annual composers’ workshop over the past several years, alongside music subsequently commissioned by the LSO from Panufnik composers to be part of the orchestra’s main season (now a regular part of the scheme). In 2013, to celebrate the LSO’s ‘Futures’ project, a sequence of Variations was commissioned from nine alumni of the scheme in honour of Andrzej Panufnik, using a theme from his ‘Universal Prayer’ of 1969. I provided the framework for these variations by orchestrating the theme and composing the first and final variations; I suggested a possible mood and tempo for each composer’s variation, but they were otherwise completely free to use their imagination. What is remarkable to me is the unity that has emerged from this project: a tribute both to the inspiration provided by Andrzej Panufnik, and to the faith that the LSO has shown in the Panufnik Scheme.