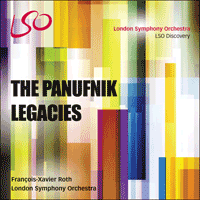 An album of new works by ten emerging composers. The pieces—originally commissioned as part of the LSO Panufnik Scheme—were recorded in LSO St Luke's and are now presented on disc, enabling the LSO to share and promote the composers' music world-wide. The LSO Panufnik Scheme began in 2005 and each year offers six composers the opportunity to write a 3-minute piece for the LSO. This recording showcases the works of selected composers from across the first five years of the scheme, representing the eclectic range of styles and influences of the 45 composers who have now worked with the Orchestra through this scheme.

'There are plenty of imaginative sounds in The Panufnik Legacies, a CD from the LSO showcasing works by young composers. In Flēotan, Charlie Piper creates the sense of sounds suspended in the air, while in Christopher Mayo’s Therma, earthy rumblings gradually erupt. A highlight for me, though, was Eloise Nancie Gynn’s Sakura (cherry blossom) in which darker forces emerge and subside against a backdrop of atmospheric shimmers' (BBC Music Magazine)
'There are 11 firecrackers on this disc, written by 10 composers who have been nurtured by the LSO’s Panufnik Young Composers Scheme' (The Daily Telegraph)

'The Panufnik Legacies is an extremely valuable release, demonstrating the London Symphony Orchestra’s commitment to contemporary music, François-Xavier Roth’s dynamic and committed conducting, and that music being written right now is in very good health' (Classical Source)
'This is certainly a disc for those who are musically curious, and maybe the best way in is through Jason Yarde’s coolly inviting Rude Awakening!, which lives up to its name! The LSO plays marvellously for the unstinting François-Xavier Roth. There is much to relish here, the music of now and the future. What’s more, the sound is superb in its clarity and impact, not transferred too loudly (as can be the case these days), allowing the orchestra space and dynamism. All round, very impressive' (Hi-Fi Critic)

By the time this recording is released the LSO Panufnik Young Composers Scheme will have entered its 9th year, with more than 50 composers taking part since 2005. No other major orchestra can match this achievement, and the LSO deserves great credit for embracing the scheme so wholeheartedly. Opportunities for composers to work with orchestras are few enough, but to have the LSO at your disposal is something which, ten years ago, when the first ideas for such a scheme were formulated, could only be dreamed of.

Each year six composers are chosen from a long list of applicants; their task is to write an orchestral piece of approximately three minutes’ duration which will be workshopped by the LSO in a dedicated session. Throughout the year they have contact with the orchestra and with individual players, attending rehearsals and concerts as often as possible: a real relationship develops, which continues beyond the scheme itself, so that we feel that a ‘Panufnik family’ has been established. With the remarkably generous backing of the Helen Hamlyn Trust, the patronage of Camilla Panufnik—whose active participation has been an essential part—and the indispensable contribution of the wonderful François-Xavier Roth, the scheme has grown ever stronger as it has developed, with commissions from amongst its participants becoming a regular part of the LSO’s main season. And now a recording: sometimes dreams come true!