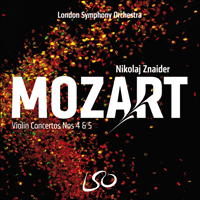 Violin Concerto No 4 in D major K218 (1775)
Although the prevailing image of Mozart the performer is that of a pianist, the part played by the violin in his early development as a musician was hardly less important. How, indeed, could it be otherwise when his father and teacher, Leopold, was the author of Violinschule, one of the eighteenth century’s most influential treatises on violin technique? Accounts of the child-prodigy’s triumphs around Europe suggest that, at that stage at least, he was equally proficient on violin and keyboard, and right into the mid-1770s his letters home to his family contained reports of public appearances as a violinist. ‘I played Vanhal’s Violin Concerto in B fl at, which was unanimously applauded’, he wrote from Augsburg in 1777. ‘In the evening at supper I played my Strasbourg Concerto, which went like oil. Everyone praised my beautiful, pure tone.’

Despite these peripatetic successes, it was Salzburg that was really the spiritual home of Mozart’s violin music. It was there—where violin concerto movements were as likely to be heard as outdoor evening entertainment music or as an embellishment to a church service as in a concert hall—that he first played a concerto at the age of seven, later toiled in the court orchestra, and, between 1773 and 1775, composed his five violin concertos. They may not always probe the depths of his later, Viennese piano concertos, but it is true to say that they all show some degree of Mozartian inspiration, often of the most ravishing kind. For the accent here is not on technical brilliance but on lyricism and an eloquent personal expressiveness which we now recognise as being unique to the composer, but which at the time marked a new stage in his artistic development. As he once wrote to his father after hearing another violinist play a particularly demanding concerto, ‘I am no lover of difficulties’.

Mozart composed his first violin concerto—his first concerto for any instrument—in 1773. The remaining four were written in rapid succession during the latter half of 1775. The Fourth is dated October 1775, following hard on the heels of the well-known Violin Concerto No 3, a work which had shown a considerable leap in creative assurance over its predecessors. The Fourth exudes the same newfound confidence, yet compared to the Third it is a less dreamy work, bolder and cleaner. The first movement is lean and muscular, but at the same time maintains an elegant clarity and grace. The Third had revelled in delicate dialogue between soloist and orchestra, but the Fourth allows the violin to indulge in a more continuous flow of melody, with the orchestra providing a supportive role. As ever in his concertos, Mozart also shows skill and imagination in the ordering and handling of his various themes. The little fanfare with which the movement opens, for instance, returns to inaugurate the fi rst solo, its reappearance in a higher register transforming it into a lyrical statement. After that it is not heard again.

The radiant Andante cantabile extends the dominance of the soloist, for after the orchestra’s opening statement, it is the violin that carries the song-like melody almost without interruption. This is violin writing of the most serenely classical kind, making use both of the instrument’s clear higher register and of the soulful richness of its lower strings.

The finale is a Rondo in which Mozart delights in keeping the listener guessing by constantly hopping between two different musical ideas—the poised Andante grazioso with which it opens, and the tripping Allegro, which interrupts its every appearance. And if there is a hint of pastoral dance about the latter, there is no mistaking the folk-music inspiration for the episode which occurs about halfway through the movement, when an exaggeratedly powdered French-style gavotte turns up, followed by a more rustic tune with bagpipe-like drones from the soloist. It would be a mistake, however, to imagine Mozart empathising too strongly with the lot of country folk; this is a rural world whose origins lie more in the make-believe of French ballet than in the realities of the Austrian countryside. Even so, it has a pleasantly calming atmosphere of its own, and helps to lead the concerto towards a conclusion charmingly free of bombast.

Violin Concerto No 5 in A major K219 (1775)
Mozart’s period of devotion to the violin concerto was a short one; after 1775, he produced no more in the remaining 16 years of his life. Subsequent concertos included examples for horn, oboe, flute, clarinet, and, most gloriously, piano, but the violin never occupied him again in this regard. By any standards this is regrettable, but it appears even more so in the light of the considerable beauty and all-round compositional skill shown by the fifth and last of the violin concertos, a work that seems to pull together many of the best qualities of its predecessors.

Completed on 20 December 1775—only two months after the fourth—the fifth is a work that, while being perhaps the most technically demanding of the violin concertos, combines radiant warmth with sprightly humour, and violinistic athleticism with sublime poetry. Conceived on a notably larger scale, too, it has the look of a new stage of development, so how strange it is that, at the age of 19, Mozart should here be writing his last concerto for violin. How, too, one could wish for just a few more!

That this is a concerto not to be hurried is soon established. Thematically speaking, the opening is surprisingly unassertive, with the orchestral violins striding out lightly over a quivering accompaniment, but without anything that strikes the listener as a theme as such. Even more unexpected is the way in which the soloist emerges: six bars of pensively soaring adagio over a murmuring accompaniment, eventually bursting out into a new theme full of swaggering self-confidence and revealing the opening to have been an accompaniment in search of a tune. Note, too, how the little upward sweep that ends the first orchestral section is taken up for development later in the movement. The tempo marking, incidentally, is one that Mozart seems to have been almost the only composer to use: the Italian word aperto can be translated variously as ‘open’, ‘bold’, ‘clear’ or ‘frank’.

The slow movement is longer than those of the other violin concertos of 1775, but its effortless beauty never wavers. There is little dialogue, just a serenely drawn and effortlessly touching melody for the solo violin, with the orchestra supplying the most loving of accompaniments. The concerto finishes with a ‘rondeau’ in which returns of the opening theme are interspersed with contrasting episodes. As in the finale of the fourth concerto (and the third before it) Mozart takes the opportunity here to introduce an element of humorous impersonation. In the earlier works this took the form of bagpipe-and-drone effects, but here it is an exhilarating excursion into what is usually called ‘Turkish’ music. In fact this style—evoked with exaggerated melodic leaps, pounding rhythms and col legno effects (hitting the strings with the wood of the bow) in the cellos and basses—owes more to Hungarian gypsy music than to the Ottomans, but for most Europeans of Mozart’s time its exoticism would have seemed Turkish enough. That Mozart himself borrowed some of this section from music he had written for a ballet entitled La gelosie del Seraglio (The jealousy of the Harem) confirms how he saw it; the reason behind this apparent musical joke, however, remains a mystery.