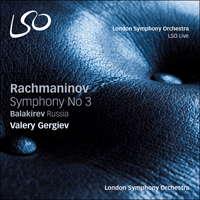 Valery Gergiev conducts a scintillating account of Rachmaninov's powerful Symphony No 3, often considered to be the composer's most overtly Russian symphony despite being written some two decades after he emigrated to America. Concluding the programme is Balakirev's Russia, an epic symphonic poem derived from themes collected during an expedition up the Volga.

'Valery Gergiev’s view is dark and stormy … some will admire the passionate Mahlerian outburst at the heart of his first movement, relishing the extreme contrasts of tempo and mood in the tripartite second' (Gramophone)
'[Concert review] For the Third Symphony to make its true impact, it needs a reading of great penetration and depth, which is precisely what it obtained on this occasion. This was Gergiev and the LSO at their finest' (Classical Source)

Sergei Rachmaninov Symphony No 3 in A minor Op 44 (1935–36)
Each of Rachmaninov’s three symphonies sums up one of the three main periods of his life. The First (1897) is the outpouring of a passionate and adventurous young man steeped in the climate of late 19th-century Russian music and literature. The Second (1907) is an expansive, opulent work composed when Rachmaninov was at the peak of his triple career as composer, pianist and conductor. The Third, written three decades later, comes from the years of exile when Rachmaninov was cut off from his native culture and traditions. He had become a world-famous piano virtuoso, but outside Russia was generally less highly regarded as a composer.

Rachmaninov began the Third Symphony in the summer of 1935 in his villa on the shores of Lake Lucerne in Switzerland. The first two movements were written relatively quickly, but he had to interrupt work for a major concert tour in the United States that autumn and winter. It was only in June 1936 that he was able to return to Switzerland to compose the finale. The premiere took place in America that November: ‘I was present at the first two performances’, wrote Rachmaninov, ‘it was played wonderfully (The Philadelphia Orchestra—Stokowski conducting). Both audience and critics responded sourly. Personally, I’m firmly convinced that this is a good work. But … sometimes the author is wrong, too! However, I maintain my opinion’.

Rachmaninov was right about the Symphony’s quality, but perhaps those early audiences in a US still suffering from the Depression, and in a Europe threatened with war, can be forgiven for not at first appreciating its special character. The work of a reluctant exile, the Third Symphony stands in an uneasy position between two worlds: the Russia that Rachmaninov had lost after the Revolution, and the uncertain new world of inter-war Western Europe and the US in which he was forced to rebuild his life. Most of the Symphony’s themes have a very marked Russian character, but they are treated with such ambiguity that few things are quite what they at first seem to be. Consider, for instance, what is usually referred to as the ‘motto theme’. This theme, a chant-like oscillation of three notes, is heard at the very opening, in the watery, strangled colours of clarinet, muted horn and high solo cello. It reappears in various forms throughout the symphony, but only half-way through the finale does its latent significance come to the surface. Fleetingly, and easily missed, appear passages where the motto is clearly heard as a variant of the Dies irae plain-chant—that melodic tag which stalks through Rachmaninov’s music as a grim reminder of mortality.

The broad outline of the first movement is a deceptively classical sonata-form with clearly articulated introduction, exposition, development, restatement and coda; but the form’s very clarity throws into relief a number of contradictions. The introduction is brief: an unadorned statement of the motto, immediately swept aside by an outburst for the full orchestra. The Allegro moderato’s main theme, scored for oboes and bassoons over a rocking violin figure, sounds at first hesitant and frail, but despite its initial diffidence it is this theme which contains the motives for much of the Symphony’s material. In the development section it is fragmented and invested with a distinctly bitter flavour, inevitably suggesting the composer’s sense of desolation at the loss of his Russian past. The second theme, launched by the cellos, is one of Rachmaninov’s memorable ‘big tunes’, vocally phrased, sensual, capable of endless extension. It seems to inhabit a different world from the first, although the two are in fact closely related. It is absent from the long development, and when it returns in the recapitulation its expected stability is undermined by modulations into remote keys: the Indian summer has taken on the chill of approaching winter.

At the centre of the Symphony lies a single two-in-one movement combining slow movement and scherzo. This movement, like the first, opens and closes with the motto theme. The Adagio represents Rachmaninov at his most succulent, with a controlled flow of expressive melody rising by degrees to an impassioned climax. The Allegro vivace, in complete contrast, is brittle, quirky, full of unexpected twists and bizarre orchestral sonorities. When it has run its course, the Adagio returns, but as a tenuous memory of itself. Much abbreviated, it cannot rise to its former level of intensity but gently fades away in a retrospective haze. The central movements can be heard as a sort of pivot around which the symphony turns, and it is the toughness introduced by the scherzo section which nourishes the finale: in other words, it is as though images of the past must now give way to an acceptance of the present, with all its contradictions and unsolved challenges. The finale is, in some ways, the most straightforward movement of the three, with its sharp rhythmic impetus and orchestral virtuosity. But passing reminiscences of earlier themes, as well as those fleeting references to the Dies irae, cast disturbing shadows across its features.

Mily Balakirev Russia (Second overture on three Russian themes) (1864, rev 1907)
Almost more than for his own music, Balakirev is famous for the inspiration he provided to those composers in the 1860s who aimed to create a truly Russian style through the use of folk materials. This work is a fine example of what they were trying to achieve. It is based on three folksongs that Balakirev had heard in the course of his travels along the Volga: a slow wedding song and two round-dances. The first of these is heard in the slow introduction and coda, the other two are featured in the main fast section.

Balakirev takes his themes through a spectrum of variations based on rhythm, harmony and colour. Since the folk songs are built from short phrases which are frequently repeated, they can easily be fragmented and combined; syncopations and changing stresses give the rhythms a sharper and perhaps fresher character than was usual in Western European music of the period. The harmony, too, is at times freer than many Western composers would have used, with a folk-like stressing of notes foreign to the main chord. Orchestral colour and texture are not incidental, but vital elements of the composition, as the tunes appear in different registers and instrumental combinations, each giving a slightly different character to the basic material. First performed in 1864, this piece went through various editions and revisions, each with different titles and explanations. It was first performed in 1864 as Second Overture on Russian Themes, with an implied programme of radical populism.

On publication five years later, it was given the title 1,000 Years, referring to the semi-legendary foundation of the Russian state in 862. In 1890 the title was changed again to Russia (in the original, ‘Rus’: more a general evocation of Russianness than the name of the modern country), with a commentary linking the themes with particular aspects of Russian history. The score’s final edition in 1907 (the version heard in this recording) bore the added comment that everything fine and worthwhile in Russia had been destroyed by the 18th-century reforms of Peter the Great. These changing titles and extra-musical commentaries reflect the composer’s personal shift from young radical to the blackest of reactionaries, and have almost nothing to do with the piece itself, which stands as a remarkably sophisticated and effective gloss on Mikhail Glinka’s reported remark ‘The people create the music, we composers only arrange it’.