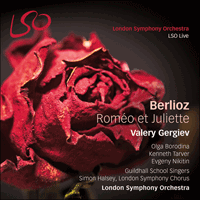 Valery Gergiev and the LSO continue their acclaimed Berlioz series with Roméo et Juliette. Recorded live at the Barbican in 2013, they are joined by the London Symphony Chorus, Guildhall School Singers and Grammy award-winning soloists Olga Borodina and Kenneth Tarver.

'Valery Gergiev directs a red-hot performance here with the LSO and the London Symphony Chorus, augmented by the fresh-sounding Guildhall School Singers … it’s a strong team performance, driven by earthy passion’’ (The Scotsman)

Almost from the moment that the 23-year-old Berlioz saw the English company’s performance of Shakespeare’s Romeo and Juliet at the Odéon theatre in September 1827, ideas for some kind of musical response began to crowd into his mind. But the article in an English newspaper which later reported that as he left the theatre he exclaimed, ‘I shall write my grandest symphony on the play’ could not have been more wrong.

Writing a symphony of any kind was the last thing he would have been thinking of at that stage of his career. His musical education, since coming to Paris from the provinces six years before—a boy of 17 who had never heard an orchestra—had been largely devoted to the operas and sacred music of the French classical school. The crucial discovery of Beethoven, and of the symphony as a major art-form, lay several months ahead.

The revelation of Beethoven
Berlioz’s Roméo et Juliette comes out of Beethoven almost as much as out of Shakespeare—out of the revelation of the Beethovenian symphony at the Conservatoire concerts in 1828: the symphony as a dramatic medium every bit as vivid and lofty as opera, and the symphony orchestra as a vehicle of unimagined expressive power and subtlety, of infinite possibility. From that time on his aspirations turn in a new direction, towards the dramatic concert work, culminating, twelve years after the epiphany at the Odéon, in Roméo et Juliette.

For Berlioz, listening to the Beethoven symphonies and studying the scores in the Conservatoire Library, the sheer variety of their compositional procedures and the clearly distinct character of each work reinforced the lessons of Shakespeare: continual reinvention of form in response to the demands of the poetic material. Each of his three symphonies is cast in a different form, and adopts a different solution to the problem of communicating dramatic content: in the Fantastique a written programme, in Harold movement titles, in Roméo choral recitative, setting out—as in Shakespeare’s ‘Two houses, both alike in dignity…’—the action distilled in the movements that follow.

The project occupied him a long time. In Italy, in 1831–32, he discusses with Mendelssohn a possible orchestral scherzo on Queen Mab, and—under the, to him, negative impact of Bellini’s Montecchi e Capuleti—imagines an ideal scenario for a dramatic work: ‘To begin, the dazzling ball at the Capulets, where amid a whirling cloud of beauties young Montague first sets eyes on “sweet Juliet” whose constant love will cost her her life; then the furious battles in the streets of Verona, the “fiery Tybalt” presiding like the very spirit of rage and revenge; the indescribable night scene on Juliet’s balcony, the lovers’ voices “like softest music to attending ears” uttering a love as pure and radiant as the smiling moon that shines its benediction upon them; the dazzling Mercutio and his sharp-tongued, fantastical humour; the naïve old cackling nurse; the stately hermit, striving in vain to calm the storm of love and hate whose tumult has carried even to his lowly cell; and then the catastrophe, extremes of ecstasy and despair contending for mastery, passion’s sighs turned to choking death; and, at the last, the solemn oath sworn by the warring houses, too late, on the bodies of their star-crossed children, to abjure the hatred through which so much blood, so many years, were shed’. Much of this will feature in the symphony that Paganini’s princely gift—a cheque for 20,000 francs which relieved Berlioz of the heavy burden of debt—enabled him to write.

The formal plan
The work finally performed in the Conservatoire Hall in November 1839 was the result of long and careful consideration of ends and means. ‘Romeo and Juliet, Dramatic Symphony, with chorus, vocal solos, and prologue in chanted recitative, after Shakespeare’s tragedy, dedicated to Nicolo Paganini’, is its title. Berlioz’s later preface later has an ironic edge: ‘There will doubtless be no mistake as to the genre of this work’. In fact there has been a great deal. Yet (as the preface continues), ‘although voices are frequently employed, it is neither a concert opera nor a cantata but a choral symphony’.

Nowadays Mahler’s multi-movement vocal-orchestral constructions are accepted as symphonies, but they were long disputed. (Their whole conception has been described by the composer Hugh Wood as ‘profoundly Berliozian’.) In Berlioz’s symphony the balance between the symphonic and the narrative is exactly calculated (with the wordless love scene at the heart of the work, structurally and emotionally). The more one studies it the stronger its compositional grasp appears. So far from being arbitrary—an awkward compromise between symphony and opera or oratorio—the scheme is logical and the mixture of genres—the joint legacy of Shakespeare and Beethoven—precisely gauged.

The fugal Introduction, depicting the feud of the two families, establishes the principle of dramatically explicit orchestral music and then, using the bridge of instrumental recitative (as in Beethoven’s Ninth), crosses over into vocal music. Choral Prologue now states the argument, which choral Finale will resolve, and prepares for the themes, dramatic and musical, to be treated in the core of the symphony by the orchestra. In addition, the two least overtly dramatic movements, the adagio (Love Scene) and the scherzo, are prefigured, the one in a contralto solo celebrating the rapture of first love, the other in a scherzetto for tenor and semi-chorus which introduces the mischievous Mab. At the end the Finale brings the drama fully into the open in an extended choral movement that culminates in the abjuring of the hatreds depicted orchestrally at the outset.

The use of voices
Throughout, voices are used enough to keep them before the listener’s attention, in preparation for their full deployment. In the Love Scene the songs of revellers on their way home from the ball float across the stillness of the Capulets’ garden. Two movements later, in the Funeral Procession, the Capulet chorus is heard. The use of chorus thus follows what Berlioz (in an essay on the Ninth Symphony) called ‘the law of crescendo’. It also works emotionally: having begun as onlookers, the voices become participants, just as the anonymous contralto and the Mercutio-like tenor give way to an actual person, the saintly Friar Laurence. At the same time the two movements preceding the Finale take on an increasingly descriptive character, the funeral dirge merging into an insistent bell-like tolling and the Tomb Scene taking the work still nearer to narrative. In this way the fully dramatic Finale evolves out of what has gone before.

Thematic resemblances and echoes constantly link the different sections. The Introduction’s trombone recitative, representing the Prince’s rebuke to the warring families, is formed from the notes of their angry fugato, stretched out and ‘mastered’; the ball music is transformed to give the departing guests their dreamlike song; in the Tomb Scene Juliet wakes (clarinet) to the identical notes of the rising cor anglais phrase in the opening section of the adagio, and this is followed by the great love theme, now blurred and torn apart as the dying Romeo relives it in distorted flashback. And in the Finale, as the families’ vendetta breaks out again over the bodies of their children, the return of the opening fugato unites the two extremes of the vast score. The principle is active to the end: Friar Laurence’s oath of reconciliation takes as its point of departure the Introduction’s B minor feud motif, reborn in a broad, magnanimous B major.

Within his outward form the music is motivically close-knit. At the same time no Berlioz score is more abundant in lyric poetry, in a sense of the magic and brevity of love, in ‘sounds and sweet airs’ of so many kinds: the flickering, fleet-footed scherzo, which stands not only for Mercutio’s Queen Mab speech but for the whole nimble-witted, comic-fantastical, fatally irrational element in the play, and in which strings and wind seem caught up in some gleeful yet menacing game; the noble swell of the great extended melody which grows out of the questioning phrases of ‘Roméo seul’; the awesome unison of cor anglais, horn and four bassoons in Romeo’s invocation in the Capulets’ tomb; the haunting beauty of Juliet’s funeral procession (another Garrick addition); the adagio’s deep-toned harmonies and spellbound melodic arcs, conjuring the moonlit night and the wonder and intensity of the passion that flowers beneath it.