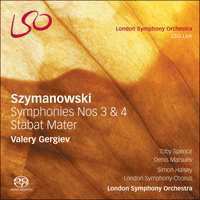 For decades Szymanowski’s music was rarely heard outside Poland. Today, he is recognized as one of Poland’s greatest musical figures. His desire to embody the music of his native land and his incorporation of the folkloric sounds of the Polish mountains make his orchestral works a must for anyone with an interest in Polish culture and music.

'A hothouse performance of Symphony No 3, where the tenor Toby Spence, the London Symphony Chorus and lush-sounding LSO all combine to capture the orientalist tone' (BBC Music Magazine)
'The soloists leave little to be desired: Sally Matthews (her voice having latterly taken on an almost mezzo-like richness) and Ekaterina Gubanova combine most eloquently in their various duet passages, while Kostas Smoriginas exudes passion without undue histrionics. Gergiev directs with thoughtful attentiveness, and though the pauses between its six movements might have been minimized even further, the radiant transcendence of the fourth and final sections is never in doubt. It helps that the contribution of the London Symphony Chorus, audibly revitalized under Simon Halsey, galvanises this account to an extent seldom encountered outside of Polish readings, so ensuring the fusion of Renaissance and folk-inflected harmonies is not merely distinctive but blazes a trail right through to the present' (International Record Review)
'LSO Live offers another in its stellar series of works by this essential composer … if you already have the equally impressive recording of the first two symphonies with Gergiev and the LSO (also on LSO Live) this one is an essential addition' (Audiophile Audition, USA)

'Along with the First Violin Concerto, [Symphony No 3] represents the peak of the composer’s middle period, when he was heavily influenced by Debussy and Scriabin. Gergiev and the LSO revel in the rich tapestry of sound, while Toby Spence is impressively ecstatic in his high solo lines. Pierre Boulez may have coolly revealed every strand of Szymanowski’s orchestral texture, but Gergiev seems more in touch with the composer’s exotic world’ (Limelight, Australia)

The most fertile period in the compositional career of Karol Szymanowski was during the Great War of 1914–18. It may seem odd that, at a time of great uncertainty and conflict, he should have produced works of otherworldly delicacy and persuasion. Yet Szymanowski used his music as an escape into these other worlds, bolstered by memories of his recent pre-war travels to Italy, Sicily and North Africa. The range of these exotic sources included ancient Greek mythology and architecture and the calls of North-African muezzins. He was also determined to look afresh at familiar genres. In his Third Symphony (1914–16), he chose to include a vocal soloist and chorus by setting the mystic utterances of a Sufi poet from Persia.

Szymanowski found his text in a collection of German translations, which were then rendered into Polish by his friend, the poet Tadeusz Miciński. The original verse was from the second Divan by Jalal’ad-Din Rumi (1207–73) and is a paean to the universe and to friendship, as experienced in the open air under a clear night sky. An earlier source of inspiration, according to one of the composer’s sisters, was Szymanowski’s own experience in 1914 of a summer’s night in the garden of the family’s home in Ukraine. Where his preceding orchestral works (Concert Overture, First and Second Symphonies) were primarily contrapuntal in texture, ‘Song of the Night’ luxuriates in glowing harmonies, merging the musical worlds of Scriabin, recent French music and the Islamic song that he had encountered in Tunisia in April 1914.

Nowhere is this new alchemy more beautiful or intense than in the sonorous opening, where whole-tone harmony, a high-floating violin line, the voice of the poem’s narrator and choral chanting conjure up Rumi’s night vision of deep peace within the universe. The opening line contains the three components of this paean: ‘O nie śpij, druhu, nocy tej’ (Oh! Sleep not, my dearest friend, this night). Soon after there is a specific reference to ‘Jowisz’ (Jupiter) soaring like an eagle. In Rumi’s original this is ‘winged Ja’far’, an epithet accorded to the brother of the Prophet Muhammad’s son-in-law.

The central section is characterised by an instrumental dance in 3/8, its exuberant if interrupted steps typical of Szymanowski’s many dances in both his songs and instrumental music. Its increasingly wild passion is twice offset by a swooning wordless chorus. When calm is eventually restored, the solo tenor begins the final third of the symphony: ‘Jak cicho. Inni śpią’ (How peaceful it is. All the world is sleeping). His wonderment—‘Ja i Bóg jesteśmy sami, nocy tej!’ (This night, God and I are alone!)—expresses the core sentiment of Rumi’s poem.

Szymanowski’s orchestral mastery, alongside the flexibility of his motivic design, captures a myriad of expressive nuances as the music moves between tenderness to passion: ‘Jaki szum! Wschodzi szczęście’ (What clamour! Joy has its birth). The tenor marvels at the activities of the stars and planets above him and the chorus reaches a tumultuous climax on the final ‘nocy tej!’. The Symphony finds its ultimate resolution in a luminous perfect fifth on the C natural with which it began.

Although Szymanowski is best-known for his orchestral and chamber music, his contribution to vocal music was far from negligible. His collected songs run to four CDs, he wrote several stage-works, notably his opera Król Roger (King Roger), while both the Third Symphony and the ballet Harnasie (The Mountain Robbers) include a tenor solo and chorus. Towards the end of his life, he composed choral music on sacred topics, the two short cantatas Veni Creator and Litany to the Virgin Mary. Undoubtedly, however, his vocal-instrumental masterpiece is the Stabat Mater (1925–26). Despite its modest size and forces, it is one of his most expressive and resonant works and is one of the glories of twentieth-century sacred music.

In 1924 Szymanowski was commissioned by the French music patron, the Princesse de Polignac. In what might regarded as a parallel with Brahms’s German Requiem, or Janáček’s Glagolitic Mass, his first real thoughts centred on a Polish ‘Peasant Requiem … some sort of mixture of naive devotion, paganism and a certain rough peasant realism’. In the end, this plan came to nothing, but the following year he accepted a different commission, which resulted in the Stabat Mater. This more modest project developed his vision for a ‘Peasant Requiem’, its six short movements combining folk elements with archaisms such as Renaissance contrapuntal practices. The orchestra is modest too, not even playing in the fourth movement, and the three soloists (no tenor in this work) sing together only in the last movement.

Szymanowski was spurred on by the Polish translation by Józef Jankowski, whose poetic imagery spoke more vividly to him than did the Latin. The poignancy of the opening bars—its subdued register and keening harmonies—anticipates the text’s pain. But Szymanowski also brings a compelling beauty to Mary’s lament, as the melody for the solo soprano (supported by the choral sopranos and altos) movingly demonstrates. The tolling bass line of the second movement (baritone and chorus) upholds a more declamatory mode, building to a sonorous climax.

The solo contralto opens the third movement, in plangent duet with a clarinet. The entry of solo soprano and female chorus, pianissimo, is breathtaking. The prayerful heart of the Stabat Mater is the fourth movement, composed for a cappella chorus joined partway through by the female soloists. This essentially homophonic music, with its wondrous chord sequences, brings to mind the church songs that also inspired Szymanowski, as he once commented: ‘The essential content of the hymn is so much deeper than its external dramaturgy … one should preserve a state of quiet concentration and avoid obtrusive, garish elements’.

The baritone solo of the fifth movement, accompanied by chanting chorus, returns to provide the second climactic moment of the Stabat Mater. The sixth movement brings reflection and an opening for the solo soprano which Szymanowski described as being ‘the most beautiful melody I have ever managed to write’ (so beautiful that it influenced Górecki in his Third Symphony, often regarded as the Stabat Mater’s natural successor). With soaring melody and deep cadences, as well as a brief return of a cappella singing, the work resolves on a major triad that resonates into silence.

There was a gap of 16 years between Szymanowski’s Third Symphony ‘Song of the Night’ (1914–16) and his next orchestral work, the Fourth Symphony (1932). In the intervening years, he had composed his opera Król Roger (King Roger), in which he consummated his passion for Mediterranean culture and tussled with the Dionysian and Apollonian impulses that both drove him forward creatively and marked him personally. In 1921, during the composition of King Roger, he wrote his first work drawing on Polish sources, and this turn of direction dominated his composition for the last 16 years.

Where the Third Symphony refashioned the genre into a single-movement work for solo tenor, chorus and orchestra, the Fourth broke with tradition in a different way. It is, effectively, a piano concerto in three movements. The ‘concertante’ aspect refers to Szymanowski’s wish to write a companionable work that he could perform himself. He was a good pianist, but not by nature a soloist. The Fourth Symphony makes an interesting comparison with the understated Third Piano Concerto (1945) by Béla Bartók, because they both demonstrate a simplification of musical idiom and also because they begin in strikingly similar ways.

The first movement opens with a repeated F major chord over which the soloist elaborates a beguiling theme in double octaves. Its origins in the exuberant folk idioms of the Tatra Mountains, where Szymanowski had a home, soon become apparent in the polyphony with horns and wind instruments. The lyrical high violin lines and the intense climaxes from his earlier music are still present, although now he uses a more modestly sized orchestra. There is a new earthiness, a new edge to his treatment of the musical world that he had found on his doorstep.

The opening of the Andante molto sostenuto could hardly provide a greater contrast. The soloist provides background figuration for a flute melody, later taken up by solo violin. An alternating minor third (initially C-A on the timpani) underpins the drive to the full-blooded central climax, where what had seemed so innocent on the flute at the start becomes impassioned in a way that would not have been out of place in the Straussian works of his first period. The flute returns, this time with the first theme of the first movement. A few piano flourishes tumble down to the start of the Finale.

Szymanowski called the third movement ‘almost orgiastic in places’. It is his most thrilling evocation of the dance—he invariably had to repeat it in concert and it has served as a model for many subsequent Polish composers. It is cast as an oberek, a fast cousin of the mazurka. The timpani return to their minor third, now A-C, propelling the music to its first climax. Soloist and orchestra whirl and stamp vigorously, before a solo violin leads to the calmer central section, closer in tempo to the slower mazurka. But the undercurrent of energy cannot be contained and the movement—with extreme and almost grotesque elements thrown in for good measure (high violins sounding anything but lyrical)—hurtles heedlessly headlong.