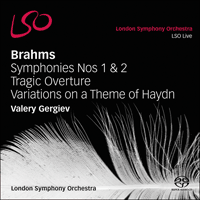 Valery Gergiev begins his Brahms symphony cycle with recordings of the first two Symphonies, the Tragic Overture and the Haydn Variations. The recording and performances of Brahms’ symphonies were a new departure for Gergiev, an opportunity he relished with energy and enthusiasm, and his interpretations have been acknowledged for shining new light on these works. The symphonies were toured internationally, including the Edinburgh International Festival in 2012.

Brahms’s epic Symphony No 1, portraying dignity and grandeur, was ecstatically received at its premier in 1876, and Brahms was soon heralded as one of the great symphonic masters. No 2, with its joyful melodies and pastoral beauty, portrays a more relaxed tone than its predecessor. The Tragic Overture, on the other hand, is turbulent and tormented, with a powerful and magnificent energy.

‘‘This Brahms double album enshrines performances that Valery Gergiev gave with the LSO at the Barbican in the latter months of 2012, and they richly deserved preservation. Gergiev produces a gripping, architecturally secure account of the First Symphony … Gergiev’s account of the Second … is refined and sensitive’’ (BBC Music Magazine)

'This is the most compelling new recording of the First that I've heard in a long time … all four pieces show that Gergiev has a point of view in Brahms. Whether you agree with it wholly or not, this is what makes these performances so good. Gergiev's way with Brahms—broad, lush, passionate—is not the only way; but it is consistent and very enjoyable' (American Record Guide)
'Valery Gergiev strides on stage, throws down the gauntlet, and accomplishes a coup, declaring himself a major new Brahms interpreter to be contended with … this is very strongly recommended’’ (Fanfare, USA)
‘‘Gergiev finally gets around to Brahms, and continues to impress and surprise … the sound keeps getting better and better the longer LSO Live goes at it’’ (Audiophile Audition, USA)

Brahms’s First Symphony in C minor has always had a symbolic place in 19th-century symphonic music: its long wait till the composer’s middle age at 43 in 1876 invariably seen as the ultimate tribute to the intimidating influence of Beethoven. But the story is not quite as straightforward. Brahms had already temporarily—and impatiently—titled his first orchestral Serenade, Op 11 (completed 1859) a ‘symphony serenade‘ because of its expansive character; and the ‘Allegro’ first movement of the Symphony was actually first completed as early as 1862. Although Brahms’s autograph of this does not survive (only movements 2–4 remain), Clara’s Schumann’s quotation of the familiar opening bars (38–42 of the published score) to Joseph Joachim in a letter in this year, and her description of it as being ‘so interwoven’ suggests that it was essentially the music we know: a driving 6/8 movement of underlying scherzo character cast in sonata form, and made even more economical by striking contrapuntal skill—in which bass and upper part exchange roles and even invert their shapes, adding a new dimension of concentration to symphonic style.

Brahms could doubtless have provided a finale to this movement quite quickly. But the fourteen years that separate it from the completed work allowed for the design of something much more original: the spacious movement with a dramatic slow introduction whose two most striking main ideas—the horn call and a solemn brass chorale—return at strategic moments in the main Allegro non troppo, ma con brio. It is true that the big tune that launches this has a certain similarity to that of the finale of Beethoven’s Ninth; but its character is essentially different, and its destiny entirely so, for, after extensive exposure, it disappears in favour of the gradual and pervasive re-integration of earlier material (even from the first movement), the gathering momentum eventually crowned in triumph with the chorale.

With a finale on this scale—the middle movements had to be very focused: and Clara was right to describe them as ‘more suited to a serenade than to a symphony’. The purpose of the mainly gentle third movement is to prepare the way for the finale—as it does with clear reference to the descending bass figure that opens the finale’s introduction, when the reprise of the third movement (bar 115) is heralded at bars 109–114. And Brahms even recast significantly the structure of the second movement after the first performance to tighten the whole further, adding the notable sudden reference to the work’s opening motif to the first theme from bars 4–17. The first performance was on 4 November 1876 in Karlsruhe, with the court orchestra conducted by a supportive friend, the music director Otto Dessoff, with an ensemble of just 49 players (a number not at all unusual for the time), though it was soon given by bigger ensembles.

Although the D major symphony (No 2) was completed within less than a year of this premiere, in the summer of 1877, it belongs to an entirely different world. From the very opening bars it appears more expansive and improvisatory, reflecting the many new influences that had entered Brahms’s music, with a much fuller orchestral sonority including trombones and tuba, absent from the First Symphony (which only uses trombones in the finale), and with much richer orchestral detail. The triple meter and mellow horn calls immediately recall the more popular idiom of the piano waltzes and vocal Liebeslieder, written in the middle 1860s with Brahms’s increasing acquaintance with Vienna. The expansive quality is even more pronounced in the second theme, whose two tonal stages (it appears first in the mediant minor key F sharp minor, then in later the expected dominant, A major) offer two distinct perspectives on its singing character. Though typically Brahmsian inflections of minor tonality and questioning harmonies and rhythms certainly tinge the mood, the pastoral character prevails: Brahms wrote this, like the Violin Concerto, in the idyllic lakeside spa of Pörtschach on the Wörthersee in Southern Austria, and made a point of noting the influence of his beautiful surroundings.

Improvisation takes on an altogether different character in the deeply reflective second movement—the emotional core of the work. One notices immediately the seamlessly developing main idea—12 bars of concentrated motivic evolution in which the music seems almost to speak, and that marks yet another stage in symphonic evolution. A second section in 12/8 metre introduces a stately dance-like progression before the weighty and cumulative development of the main idea takes over—a passage that is bound to leave the listener with much more convulsive images of nature. The dance has an almost neo-classical character, a quality that emerges much more distinctly in the third movement. Its deceptively straightforward ‘Allegretto grazioso’ marking (an obvious successor to the ‘Menuetto’ movement of the first serenade—both are G major movements in D major works) is subjected to really extreme rhythmic variation, in which the 3/4 music is forced into 2/4 metre, and then into 3/8 metre, each related to the basic pulse by metrical transition of delightful sophistication. Brahms seems to have been more confident in the success of this work and it was premiered at the Gesellschaft der Musikfreunde with the Vienna Philharmonic under Hans Richter, on 30 December 1877, to his complete satisfaction.

The Tragic Overture, unlike the Academic Festival Overture, to which it was apparently written as a companion, was not intended for any one occasion. Brahms drew on earlier material (sketches for some ideas go back ten years), and he had difficulty in deciding on a title, also considering calling it a ‘Dramatic Overture’. But whatever the background, the present music certainly fulfils the title. A sense of inexorability pervades the whole work, starting with its arresting opening chords and ominous main theme. This sense also plays a role in Brahms’s very unusual treatment of the sonata form, in which he places a completely contrasted and self-contained central section as the development: based on an obvious transformation of the latter part of the theme, at half the tempo and of often playful character, it first represents a surprise, but soon reveals itself as an attempt to stem the driving character of the main theme. But it is not to be: to the very last bar of the recapitulation, resolution is ruthlessly denied.

Brahms’s long-standing interest in earlier music of the Baroque and Classical eras finally entered the orchestral sphere really fully with the Variations on a theme of Haydn, the so-called ‘St Antoni Chorale’: a freestanding orchestral work of neo-classical character in theme, form and orchestration. The theme was given to Brahms by C F Pohl, the first great Haydn scholar, and librarian of the Gesellschaft der Musikfreunde in Vienna, copied by him from a Feldpartita for wind band attributed to Haydn, though this authorship is now disputed. Brahms pointedly retained the character of the original orchestration in scoring the theme for two oboes, two bassoons, a contrafagott (for the serpent) and two horns, as well as adding bass strings. He was doubtless attracted to the theme by its unusual five-bar phrasing, giving distinctiveness to the very simple harmonic skeleton. Building on his, by now, very well established variation method in retaining the essentials of the harmony, and thus the length and phrasing of the theme, he now, with the orchestra to hand, achieved an entirely new level of thematic independence and variety of characterisation in the eight variations. One can never hear the theme itself, but always sense its presence. For example, he dives headlong into the first variation by simply picking up the last repeated notes of the theme, as though to completely banish its original identity; and there is no sense at all of the theme in the labyrinth of canons that represents the final variation. But even more is to be drawn from the historical background. The finale deconstructs the theme further for a set of variations on a ground bass of five bars repeated many times until the theme finally returns to unveil its intimate connection to the bass, and to crown the work in celebratory style, absorbed into the work’s distinctive sound world. Like the Second Symphony it was premiered at the Gesellschaft, on 2 November 1873, here under Brahms’s own direction.