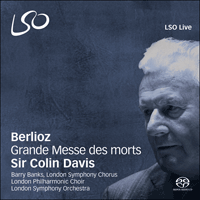 Sir Colin Davis was revered Berlioz expert and his LSO Live Berlioz recordings were one of the most widely acclaimed series’ of classical recordings of recent years and collected numerous awards, including two Grammy Awards for Les Troyens. The release of the monumental Grande Messe des morts marks the completion of this cycle and further confirms Sir Colin’s status as one of the greatest conductors of Berlioz’s music. 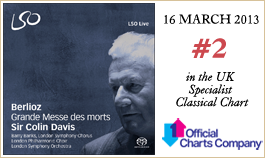 ‘‘Davis distils a lifetime’s practical expertise with Berlioz into a performance that is noble, thrilling, intimate and richly satisfying. His orchestra plays for him as if possessed and the massed choirs are exceptional in what they deliver. Tenor Barry Banks provides just the right combination of sweetness and power in the Sanctus, his one solo’’ (Choir & Organ)

‘‘In this live recording of Berlioz’s Requiem, made at last year’s City of London Festival, the enigmatic rising phrases that launch the work continue to reverberate hauntingly in the surrounding silences, and the tone of the combined LSO and LPO choirs—singing beautifully and bringing out the music’s profound sadness—is wonderfully enhanced. Colin Davis fits the work to the conditions with a master hand. Memorable’’ (The Sunday Times)
'The interpretation is masterly by a man who knows Berlioz perhaps better than any other conductor in the world. Everything about it is judged as just right, and Davis is one of the few who consistently realizes that the lyrical propensities of the composer are as important—especially in this work—as the more grandiose and bombastic passages. As an interpretation this is as good as it gets, the equal of any recording on the market’’ (Audiophile Audition, USA)
‘‘A magnificent valediction from the master Berlioz conductor … this utterly imposing performance of Berlioz’s grandest work was one of the last great triumphs of Sir Colin Davis’s long and illustrious career. That career, which spanned nearly sixty years, covered an astonishing breadth of repertory but he will be particularly remembered for his championing of Tippett, Sibelius and, of course, Berlioz … here is a recording to treasure which takes its place alongside Sir Colin’s 1969 recording and Paul McCreesh’s recent version as the very best in the catalogue’ (Australia)’ (Limelight, Australia)
'This, [Sir Colin Davis's] last-ever Berlioz recording, demonstrates yet again his unique empathy with and understanding of Berlioz’s music as well as his authority in conducting it' (MusicWeb International)

The dramatic possibilities of the Requiem text had long interested Berlioz; and when, in March 1837, the French government commissioned him to write a Requiem Mass to commemorate King Louis-Philippe’s escape from assassination on the anniversary of the July Revolution, he set to work with great enthusiasm and completed the score in three months.

In composing it, Berlioz set out to apply to church music the same principles of freedom and expressive truth—the watchwords of Romanticism—as inspired his secular works. Berlioz is first and always a dramatist, whatever the nature of the work in question and whether its scale is monumental or intimate. From his teacher Le Sueur he acquired a clear and consistent belief in the essentially dramatic character of religious music, of which the ‘expression of feeling’ is just as much the object as it is of opera. And rather as an opera composer considers himself quite free to alter even the most venerated play, he did not hesitate to modify the liturgical text—changing the order of phrases or sections or leaving them out altogether—if the music’s dramatic structure or expressive purposes seemed to him to demand it.

In the Rex tremendae of Berlioz’s Requiem the chorus, awed by the terrible prospect of divine judgement, cannot complete the sentence ‘Voca me [cum benedictis]’ (Call me [with the blessed]): the voice parts break off and fall silent before the vision of the bottomless pit (which in fact belongs to a different part of the Mass). In the Offertorium the impression of the eternal supplication of souls in Purgatory is intensified by the disconnected fragments of text to which the chorus sings its sad, unvarying chant: ‘de poenis … Domine … Domine … libera eas … de poenis … inferni’ (‘from the torment … Lord … Lord … deliver them … from the torment … of hell’). It is, as it were, all that we can hear of a plaint chanted unceasingly throughout the ages. Such changes have a structural as well as an expressive function: they reinforce the tripartite scheme of the work, in which Hell gives way to Purgatory and Purgatory to Heaven (Sanctus). But an orthodoxly devout composer would regard them as an unjustifiable liberty.

At the same time, Berlioz felt himself to be not destroying tradition but renewing and extending it. His Requiem belongs to the artistic heritage of late 18th- and early 19th-century France. Musical rites on a vast scale were an integral part of public life under the Revolution, the Consulate and the First Empire. The multiple orchestras and massed choruses for which Méhul, Gossec, Le Sueur and Cherubini wrote represented a grand idea: they symbolised the Nation, the People assembled for a communal act of worship. Indeed, the large forces required for Berlioz’s Requiem are not peculiar to him. Le Sueur’s symphonic ode of 1801 was performed by four separate orchestras, each one placed at a corner of Les Invalides—the same church in which, 36 years later, Berlioz’s Grande Messe des morts had its first performance. As a pupil of Le Sueur, Berlioz was the natural heir of that tradition. He did not invent it. But his imagination responded eagerly to it.

Hence the concept which the work embodies, of music as the ‘soul’ of a great church, filling and animating the body of the building—a notion which came to Berlioz as he stood for the first time in the huge nave of St Peter’s in Rome. Hence, too, the development of the Baroque idea—revived by the previous generation of French composers—of using space as an element in the composition itself. And hence the choice of a musical style characterised by broad tempos, simple, deliberate harmonic movement and massive, widely spaced sonorities: the style marks an attempt to produce a body of sound and a type of musical utterance commensurate with the scale and acoustics of a great church and with a solemn ceremonial occasion. The massed drums and the four groups of brass instruments (which Berlioz directs to be placed at the four corners of the main body of performers) are the features for which the work is generally best-known; but their effect is due precisely to the contrast they make with the predominantly austere texture of the rest of the score. For much of the time horns are the only brass to offset the bleak, mourning sound of the large woodwind choir. The apocalyptic armoury is reserved for special moments of colour and emphasis: its purpose is not merely spectacular but architectural, to clarify the musical structure and open up multiple perspectives. And it serves to underline a grandeur that is inherent in the style of the music as a whole, in its wide arcs of melody, its classically ordered cataclysms and its still small voice of humility. The Requiem transcends its local origins: the Revolutionary community has become the community of the human race throughout the ages.

Characteristic, too, is the systematic alternation of grand, powerfully scored movements with quiet, intimate ones. Each of the three numbers in which the brass choirs are used is followed by one that is devotional in mood; and the dynamic level is reduced at the end of the big movements in order to prepare for the contemplative music of the next number. The tumult of the Tuba mirum sinks to a whisper which is continued in the Quid sum miser, scored for a handful of instruments and suggesting sinful man shivering in an empty universe. The splendour of the Rex tremendae is subdued to a soft pleading—‘salva me’ (save me), sung very quietly, emerging dramatically from the full orchestra in a succession of varied harmonisations—which leads to the gentle, unaccompanied Quaerens me. The Lacrimosa ends on a diminuendo as the procession of the lamenting dead sweeps onwards out of view, to be succeeded by the remote, ageless sadness of the Offertorium.

In two or three movements the music sets out to convey the grandeur of God in objective terms. In the Tuba mirum the thunder of drums and the fanfares answering and overlapping one another from the four corners—a blaze of sound in E flat major, the antithesis of the Dies irae’s austere texture and modally flavoured A minor—depict the awesome event itself, the universal upheaval of Judgement Day. The Sanctus—for solo tenor and women’s voices accompanied by violins, violas and a single high flute—evokes a shimmering vision of the angelic host, while the long arches of phrase and static harmony of the fugal ‘Hosanna’ (directed to be sung ‘smoothly, without emphasising the individual notes’) suggest the unending chorus of praise round the throne of God. For the most part, however, the work is concerned with humanity and its weakness and vulnerability: humanity on the edge of eternity (Hostias), humanity amid total desolation (Quid sum miser), humanity in the Dance of Death, the endless procession of the dead scourged towards judgement (Lacrimosa), pleading for salvation before the majesty of God (Rex tremendae), praying from one generation to another (Offertorium), hoping against hope (Introit)—humanity striving, out of its fear of extinction, to create a merciful God and a meaningful universe.

In this sense the Requiem is a profoundly religious work, notwithstanding Berlioz’s confession of agnosticism. Religion, during his childhood and youth, had been (he wrote) ‘the joy of my life’. The very loss of this joy left an imprint on his music. The work conveys a yearning for faith, an awareness of the need, the desperate need, to believe and worship; his own lack of faith, as it were, is used to evoke the eternal hopes and terrors of the human race. From time to time we get a glimpse of peace, as in the radiant stillness of the Sanctus and in the light that falls like a benediction on the closing page of the Offertorium. But the prevailing tone is tragic. Through all the music’s contrasts of form and mood, the idea of humanity’s wonder and bafflement before the enigma of death is central and constant, from the measured climb of the opening G minor phrases and the silences which surround them, to the acceptance of the final coda, where solemn ‘Amens’ circled by luminous string arpeggios swing slowly in and out of G major, while the funeral drums beat out a long retreat.