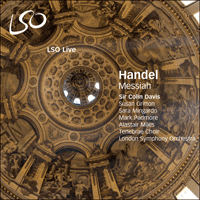 A glorious performance from 2006 of Handel's masterpiece. Sir Colin Davis and the LSO are joined by a cracking team of soloists and the glorious choir Tenebrae.

'The choral singing, from Tenebrae, is jaw-droppingly beautiful' (The Guardian)
'I would add the unflagging energy of the choral singing and its phenomenal accuracy: the members of Tenebrae … are clearly all top musical athletes' (International Record Review)
'This one definitely belongs in the hall of fame ... The musicality in this set is terrific, the Tenebrae Choir a marvel to behold, and the LSO playing like they never have. The soloists are outstanding … this is a marvelous set by a man who knows the work perhaps better than anyone, and can get to the heart and soul of Handel's celebrated score. Bravo!' (Audiophile Audition, USA)

Handel was born Georg Friedrich Händel in Halle, Germany, in 1685, the son of a barber-surgeon. His father wanted him to become a lawyer, but after George showed musical aptitude (he practised in secret), he was allowed to study music formally. At 17 he was appointed organist of Halle Cathedral, but the following year left for Hamburg, where he played in the opera orchestra and, in 1704, had his first opera Almira performed. In 1706 he was invited to Italy, and several major Italian cities saw performances of his works before he left in 1710 for the court of the Elector of Hanover (later King George I of England).

Once in Hanover, however, he applied for leave to go to England, and spent most of the next few years in London, where his opera Rinaldo was produced in 1711. The same year he was also awarded a royal pension, and in 1714, after the death of Queen Anne, he found himself in the service of his old master, now King. In 1717 he entered the service of the soon-to-be Duke of Chandos. During the next few years London heard some of his best works, including the operas Giulio Cesare and Rodelinda and music for the Chapel Royal. Handel became a British citizen in 1727 and he remained in London, putting on operas and writing music for King and court. He was nonetheless unsure of his future, and after the first performance of his Messiah in Dublin in 1742 he concentrated on oratorios, all performed in English and often including a concerto grosso performance in the interval. His performances of Messiah became a regular feature of London life; in 1749 he composed his Music for the Royal Fireworks, and in 1752 he composed his last oratorio, the masterful Jephtha. While he was writing this work, Handel became blind, first in his left eye and then totally. He died in 1759, and his funeral at Westminster Abbey was attended by over 3,000 people.

Handel’s Messiah has become one of the major icons in the musical life of this country. Choral societies perform it to willing audiences at Christmas and Easter, the ‘Hallelujah’ chorus is sung at football grounds to ribald new lyrics, and the roof of the Royal Albert Hall is periodically tested by the rising air from several thousand enthusiastic amateurs giving it their all in a ‘Messiah from Scratch’. One could say it is comfortably British.

Yet its composer was a German, born Georg Friedrich Händel in the Saxon town of Halle. Not only that, but he formed his musical personality as a young man in Italy and arrived in London in 1710 with the express intention of making his name in a distinctly foreign-sounding form of entertainment – opera in Italian. He was brilliant at it too; among the 40-or-so operas he composed for the London stage are some of the greatest ever written, in which he demonstrated a supreme talent for the portrayal of human character and the depiction of deep emotion, together with a skill in vocal melody-writing that covered everything from the showy to the profound. In the end, though, he had to give it up. Italian opera was a leisure activity enjoyed and funded principally by the aristocracy, and for all their critical successes Handel’s operas were not seen by large numbers of people. When in the second half of the 1730s the support of even the upper classes was no longer forthcoming, a change of direction became necessary.

As it turned out, Handel already had the solution to hand. For several years he had been coming under increasing pressure to compose works in English; the sweep and panache with which he wrote for chorus in works such as the four grand anthems for the coronation of George II in 1727 (the famous Zadok the Priest among them) had not gone unnoticed, and now there was a swell of opinion among London’s intelligentsia that said it was high time England’s adopted genius married his talent to some of the most exalted texts the language had to offer. Furthermore, the arena envisaged for this was not opera, which for many was an entertainment tinged with the sordidness of showbiz scandal, but instead the altogether more respectable genre of oratorio – similar to opera in its chains of separate vocal numbers and division into acts, but performed as a concert-piece without costumes or staging, with a greater emphasis on choral singing, and usually with treatment of a biblical or religious subject.

By the end of the 1730s Handel had composed a handful of oratorios to words drawn from Dryden (Alexander’s Feast and the Ode for St Cecilia’s Day), Milton (L’Allegro, il Penseroso ed il Moderato) and the King James Bible (Israel in Egypt), and on the whole they had proved successful with a new audience of middle-class music-lovers, who appreciated their English texts and elevated moral tone. But even as he accepted an invitation to make an extended visit to Dublin in 1741, Handel still needed persuading that English oratorio was the way forward. Dublin loved him, however, and on 13 April 1742 his newest oratorio Messiah was heard for the first time in the city’s new concert venue, the Great Music Hall in Fishamble Street. The event caused great excitement, with so many people wanting to attend the première that to make more room the ladies were asked to leave their skirt-hoops at home and the gentlemen their swords. Messiah was a triumph, and Handel returned to London convinced.

Messiah is unusual among Handel’s oratorios in two ways: firstly, its libretto is not a freshly-written one but a patchwork of short texts drawn from the Bible; and secondly, it is not a dramatic, opera-style presentation of a story with the singers taking named roles, but a piece in which the soloists and chorus appear to adopt different roles at different times, from prophet to believer, angel to evangelist. Christ himself is never directly represented.

The man who put the text together (indeed, whose brainchild the whole oratorio was) was Charles Jennens, an amateur man of letters and, at a time when Enlightenment thinking was calling into question many Christian nostrums, a staunch defender of traditional church doctrine. Having already collaborated with Handel on the dramatic oratorio Saul (for which he had written his own new text), on the compilation of the words for L’Allegro and quite probably Israel in Egypt as well, his idea for Messiah was to juxtapose Old Testament prophesies and New Testament narrative to emphasise the parallels between the two, thereby affirming the inevitability of Christ’s coming, and his status as Redeemer and Saviour.

The oratorio is divided into three clearly differentiated sections:

Part I: The coming of the Messiah is foretold by the prophets and announced as a real event to the shepherds on the hills around Bethlehem, the latter in a delightfully evocative Christmas sequence, which starts with the drony sounds of the shepherds’ bagpipes in the ‘Pastoral Symphony’.

Part II: The dramatic and emotional core of the piece, depicting Christ’s Passion and Resurrection. It takes in the scorn of the crowd (‘He trusted in God that He would deliver Him’) and the anguish and pity of the onlooker (‘He was despised’ and ‘Behold and see’), but rises from the low-point of ‘He was cut off out of the land of the living’ to climax in the joyous celebration that is the ‘Hallelujah’ chorus.

Part III: A vision of the world made possible by Christ’s victory over death, moving from the serene contemplation of ‘I know that my Redeemer liveth’ through glad acceptance of the Last Judgment (‘The trumpet shall sound’) to a grandiose view of Christ reigning in Heaven (‘Worthy is the Lamb’).

As it happened, Handel, though a devout Christian, was not as interested in contemporary religious affairs as Jennens. His creative response to the words he was given was based, as ever, on his innate sense of theatre and his penetrating understanding of human nature. A man who had travelled Europe and conversed with kings, cardinals, carpenters, and counter-tenors, his parameters were always going to be wider than those of the erudite but provincial Jennens, and having received his worthy libretto, he let his imagination run with it. Many of the solo arias in Messiah show his long experience of the opera house: the fizzing violins and wide leaps in the voice part of ‘Why do the nations so furiously rage together?’ make it a typical example of stage anger; there is operatic showiness in the fast music of ‘But who may abide?’ and ‘Rejoice greatly’; and the noble, heart-rending ‘He was despised’ recalls some of the arias he had written for his greatest operatic heroines.

Ultimately, though, it is the presence of the chorus that makes the greatest impact. This is not just because Handel could write for choir with more flair and imagination than anyone before or since, but because we as listeners cannot help but feel a more personal connection to the music when a choir is involved. In Messiah the chorus somehow seems to represent us, whether we consider ourselves among the community of believers or just folk possessed of ordinary human feelings. The ever-compassionate Handel knew this, just as he understood that the natural inclusiveness of choral singing holds a cherished place in the English musical consciousness. It was what made his oratorios take wing back then, as it still does now.

In the period of nearly twenty years during which Handel himself directed productions of Messiah, changes of cast and other varying circumstances of performance caused him to reallocate certain numbers to different voices and either to shorten or lengthen others, with the result that no definitive version of the work exists. Sir Colin Davis has made his own selection for this performance, drawing from the various alternatives sanctioned by Handel.