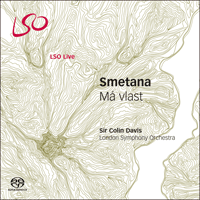 Inspired by the mythology and pastoral beauty of his Czech homeland, Smetana's six tone poems that form Má vlast (My fatherland) is one of the best examples of Nationalism in music. The stirring second movement depicts the river Vltava as it flows through the countryside and into Prague. Struck with deafness in 1874, Smetana would never hear a performance of what would become his most popular work.

'Colin Davis has an affinity with Czech music that is every bit as strong as his better-known sympathy with Berlioz or Mozart … a performance that welds the six portraits into a convincing whole. The LSO plays with warmth and grandeur and the recorded balance is one of the most successful in this series' (The Daily Telegraph)
'There can be no mistaking the conviction that he brings to the cycle ... Davis never loses sight of the outcome—the main motifs coalescing into an apotheosis both uninhibited and triumphant' (International Record Review)
'The LSO Live label goes from strength to strength ... Smetana's cycle of six tone poems reflecting the mythology and pastoral beauty of his Czech homeland is a given a vivid and richly rewarding performance that delights the ear as much as the heart … luxuriant orchestral sound and refined ensemble playing' (Classic FM Magazine)

'Colin Davis and the LSO turn in a vivid, exciting account of Smetana's perennially fresh, dramatic cycle of tone poems ... the best performances of this work must convey a sense of occasion, of a big event taking place … Davis and the LSO have managed to capture this elusive quality' (Classics Today)

Smetana’s Má vlast is one of the strongest nationalist statements in 19th century music. As with opera, the symphonic poem was in the Romantic era the natural means of expressing, in an age of growing political awareness, the idea of nationhood. Having already made a decisive contribution to Czech music with opera in the 1860s, it is no surprise that in the early 1870s Smetana turned his attention to composing a cycle of symphonic poems designed to celebrate the history, mythology and landscape of Bohemia.

The growth of Bohemia’s economic and, to a lesser extent, political fortunes in the 19th century went hand in hand with an increased awareness of Czech language, literature and art. Smetana’s operas The Brandenburgers in Bohemia and The Bartered Bride (both premiered in 1866) were formative in establishing a native opera in the Czech lands. The six symphonic poems of Má vlast, along with Dalibor, the later comedies and the festival opera Libuše crowned Smetana’s contribution to the music of his homeland. Unfortunately, soon after beginning Má vlast, Smetana became deaf – a disastrous blow for any musician, but particularly hard for one who earned the major part of his living from conducting. Thus, the music of Má vlast gained perhaps from the identification of personal suffering with the triumphs and vicissitudes of the composer’s nation.

Smetana had long had an interest in the Lisztian symphonic poem, having composed a number of works in this style earlier in his career. While much of his compositional effort in the 1860s was taken up with opera, it is clear that he retained a healthy respect for Liszt’s methods of thematic transformation. Smetana’s diary records that he began work on the score of ‘Vyšehrad’, the first part of Má vlast, in September 1874 completing it on 18 November. It is likely, however, from evidence based on different coloured inks in the manuscript, that the opening for two harps was originally for one harp, and begun as early as 1872. The completion of ‘Vyšehrad’ created sufficient impetus for Smetana to begin the second symphonic poem, ‘Vltava’, two days later, on 20 November 1874, and finish it by 8 December. The third part of the cycle, ‘Šárka’, was commenced in January the following year and the score was complete by 20 February.

Originally, Smetana had planned the fourth symphonic poem, ‘From Bohemia’s Woods and Fields’, as the third in the cycle, designed to display ‘Czech life in work and in dance’. Work did not get underway, however, until 3 June 1875. Its completion on 18 October 1875 might have been the end of Má vlast, but in 1877 Smetana stated that the grand climax of ‘From Bohemia’s Woods and Fields’ had inspired him to add further movements, thus ‘Tábor’ and ‘Blaník’ were completed on 13 December 1878 and 9 March 1879 respectively.

Vyšehrad, the first symphonic poem, takes its name from the high rock standing at the entry of the river Vltava into Prague. It was the fortress-home, according to legend, of the first Bohemian kings. An atmosphere of distant times is evoked by a bardic cadenza on the harps at the beginning of the slow introduction. The first theme is associated with the rock itself – Smetana’s symbol of the Czech nation – followed by a rising and falling arpeggio which signifies Bohemia’s glory. Both motifs play an important part in later movements and return in ‘Blaník’ as the climax of the whole cycle. According to the composer, who supplied introductions to each of the symphonic poems in the first edition, the bard sings of the nation’s noble triumphs, of battles and finally of its downfall, with glory but a memory. The musical substance of the depiction is a broad Allegro vivo ma non agitato, in which thematic fragments build to a thrilling climax before a decline, through a series of crushing diminished chords, leads to the elegiac close.

Vltava is an eclectic work. The splendid and evocative melody which runs through the composition, just as the river Vltava itself flows through the Bohemian countryside, derives from a Swedish folksong. But another source might be the distinctly similar ‘Ballada’ in Karel Šebor’s opera The Templars in Moravia, premiered in 1865, which Smetana knew well. The rippling introduction might well have been inspired by another Czech opera, the prelude of Josef Rozkošný’s The Rapids of St John, with which Smetana was also familiar. Needless to say, Smetana superseded both models and produced one of the finest pieces of ‘topographical’ music ever composed.

We first catch sight of the river as two springs which unite in the lovely countryside of South Bohemia. The river passes on through a forest from which we hear the sounds of a hunt, then on past a rustic wedding characterised by a polka. After an interlude in which rusalkas, the water nymphs of Czech mythology, play in the moonlight, the stream turns into a torrent roaring over the Rapids of St John above Prague. The climax comes with the river flowing into the city itself past ‘Vyšehrad‘ – the point at which the opening theme of the first symphonic poem returns in triumph – then out to merge with the Elbe, north of Prague.

Šárka. The third symphonic poem returns to the world of mythology to tell the stirring tale of Šárka, who, because of an unfaithful lover, has sworn vengeance on men and taken to the woods with a band of rebel women. A furious introduction is followed by the arrival of male warriors led by Ctirad. Šárka is tied to a tree by her fellows as a decoy for Ctirad who, with almost Wagnerian ecstacy, falls in love with her. After she is freed, the men rejoice drunkenly – depicted by a tipsy, triple-time polka – and fall deeply asleep. After a moment’s uncertainty, Šárka blows her horn as a signal and the women fall upon the men and slaughter them.

From Bohemia’s Woods and Fields: After the blood and thunder of ‘Šárka’, Smetana began the second half of his cycle with a broad evocation of the natural beauties of the Bohemian landscape. The powerful opening evokes the impact of nature on man as he steps into nature’s realm. The singing of birds, the sound of streams and trees stirred gently by the wind form the background to the entry of a richly nostalgic melody on the horns which represents Nature itself. A more specifically rustic episode with a polka leads to the extended finale in which all the themes are combined to generate a feeling of optimism and well being.

Tábor: The last two poems of the cycle are closely united by both their story and musical means. The name Tábor is that of a South Bohemian town, which in the Middle Ages was a stronghold of the Hussites, the followers of the religious reformer Jan Hus who challenged the Catholic Church long before Luther, and who established a flourishing dissident sect. The theme which pervades the musical fabric and acts as a motto is the Hussite chorale, Ktož jsú boží bojowníci (‘Ye who are warriors of God’). This stern melody was used by many Czech composers as a symbol both of national identity and hatred of intellectual and political oppression. The music seeks to depict tension before battle, then triumph and vicissitude, with the piety and dignity of the Hussites much in evidence. Although the chorale is heard at the end in full panoply, the conclusion is uncertain and open-ended.

Blaník: The answer to the question posed in the last bars of ‘Tábor’ comes in the crushing opening of ‘Blaník’. Following their ultimate defeat – which serves as a symbol for all defeats of the Czech nation – the Hussite warriors ride to the hill of Blaník where they lie sleeping until their nation calls on them in its final moment of need. The ride of the warriors, with continuous reference to the Hussite chorale, is followed by an affecting interlude. Centuries have passed and a shepherd boy plays his pipe on the hillside; from the distance comes the answering echo on a horn, a sign that the warriors still wait beneath the hill. With this boost to morale, the temperature of the music rises and, in a stirring conclusion, the themes of ‘Vyšehrad’ return combined with the Hussite chorale.