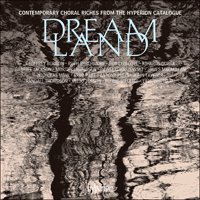 A new and intriguing sampler features a selection of pieces from Hyperion’s extensive and varied choral collection. This disc seeks to give a flavour of the contemporary choral music recorded by Hyperion over the last decade. Whilst on one level it can stand alone as a tribute to the beauty of its composers’ writing and choirs’ singing, it also lifts the lid on the albums from which the tracks are drawn. A perfect introduction to the magic new worlds of sound that await the listener.

In a little more than an hour this disc seeks to give a flavour of the contemporary choral music recorded by Hyperion over the last decade. Whilst on one level it can stand alone as a tribute to the beauty of its composers’ writing and choirs’ singing, it also lifts the lid on the albums from which the tracks are drawn. We hope to entice you to explore them further.

The disc opens with a five-part setting from 2007 of William Blake’s To Morning by Gabriel Jackson, winner of the inaugural British Composer Awards. It is a perfect example of Jackson’s ability to marry word and music: the speck on the horizon that heralds the dawn is caressed until the raging of the light so redolent of Blake is trumpeted by the voices of the award-winning group Polyphony in this beautiful and accessible miniature.

Continuing the theme of new dawn, Sir John Tavener’s 1996 setting of a text from the Orthodox Liturgy for Easter, As one who has slept, displays writing of extraordinary purity and clarity. Taken from a disc made soon after Layton and Tavener had joined forces for the epic Veil of the Temple, this performance captures the magic of that collaboration. It is imbued with a sense of stillness and expectancy from which the radiancy of the Resurrection bursts forth leaving us in a state of renewed wonder.

Polyphony has become renowned not only for its pioneering performances of new works by English composers, but also for those American too. Its two discs of the music of Morten Lauridsen are represented here by the 2005 male-voice setting of the motet Ave, dulcissima Maria, a text rarely set to music. Perhaps most famous for works such as O magnum mysterium and Lux aeterna (as featured on the soundtrack to the Dan Brown’s Angels and Demons), here Lauridsen crafts a passionate and flowing devotional work whose beginning and end are enhanced by the finger cymbals, here played by the composer himself.

Schola Cantorum of Oxford provides the least ‘contemporary’ of the works on this disc. Written in 1940, Randall Thompson’s Alleluia is, however, one of the most enduring and popular additions to the choral repertoire and encourages one to explore the lesser known of his compositions. Delivered to its commissioning conductor some 45 minutes prior to its first performance, and thus provoking the retort ‘At least we do not have to worry about the text!’, Alleluia is characterized by a skilful use of suspensions and counterpoint, becoming ever more intense a hymn of praise before subsiding to a most peaceful of endings.

The Holst Singers’ recording of Villette motets shows them equally at home with his 1959 setting of O sacrum convivium as in their acclaimed explorations of Eastern European composers such as Tormis & Schnittke. A sensuous sound world is created by the eight voices throughout the piece (notably by the use of added sixths and seconds), in an arresting example of the still under-appreciated beauty of Villette’s œuvre.

Veljo Tormis, one-time teacher of Arvo Pärt, is perhaps the archetypal advocate for a nation’s folk-song tradition, and Estonia’s most cherished contemporary composer. Having championed and drawn on the folk-song throughout the era of Soviet occupation, his 1989 arrangement of Four Estonian Lullabies is represented here by the hypnotizing Äiutus.

Geoffrey Burgon’s music was brought to international prominence in the BBC commission Nunc dimittis for the dramatization of le Carré’s Tinker, Tailor, Soldier, Spy in 1979. Both that original and a newly arranged version have been recorded by Wells Cathedral Choir and Matthew Owens along with Burgon’s 2001 setting of a famous medieval text, The Corpus Christi Carol. A carefully crafted solo line is augmented by a refrain that develops throughout the carol in deceptively simple steps. The result is an excellent example of the word being served by an inventive use of harmony.

The two Hyperion discs of compositions by Antony Pitts are represented here by his imaginative setting of St Thomas Aquinas’s thirteenth-century text Adoro te. From a seemingly simple beginning, this communion hymn gains in urgency as each voice of the composer’s own choir, Tonus Peregrinus, enters until the ultimate wish of seeing Christ face to face is expressed in memorably fervent fashion.

Polyhony’s two recordings of Tormis’s compatriot Arvo Pärt have been the subject of particular critical acclaim, the latter going on to win the Choral Category of the 2004 Gramophone Awards. His 1989 setting of the Magnificat is one of his best known works and derives powerful effect from its alternating use of quasi-solo and full sections and the contrast between its crystal clear sustained lines and the burning emotion of the impassioned tutti entries.

Pausing only to cross the border into Latvia, The Choir of Royal Holloway and Rupert Gough bring us an as yet rare performance of the music of Rihards Dubra. A confessed admirer of Pärt and Tavener, his idiom is definitely his own. As he puts it, ‘Just as everyone has their own pathway to God, so every composer has his own pathway to emotion in music …’. Commissioned in 2005 by an Indonesian choir for performance in China, Stetit Angelus sets a text from the Book of Revelation whose vivid words are matched to captivating effect by the angel calls which open the piece, the ascent of incense smoke within the temple and the piece’s atmospheric end.

Dedicated to the dead of the 1996 Dunblane tragedy, James MacMillan’s A Child’s Prayer is written for two solo trebles whose soaring lines rise above the sorrowful chords underpinning the piece. The climactic repetition of the word ‘joy’ subsides allowing the souls’ release in this most poignant of settings sung here by The Choir of Westminster Cathedral.

At the other end of Victoria Street, The Choir of Westminster Abbey provides the warmest of Christmas welcomes with Bob Chilcott’s The Shepherd’s Carol. Composed for the 2000 Festival of Nine Lessons and Carols at King’s College, Cambridge, its gently spun melody is a notable and beautiful addition to the Christmas repertoire.

A translation of Martin Luther’s Christmas Eve carol ‘Von Himmel Hoch’ gives the text for Nicholas Maw’s 1964 commission for OUP’s Carols of Today. The melody is sung first by soprano, then tenor, then by both, the text and tune supported throughout by the gentle rocking of the old Scottish word for a lullaby, Balulalow.

Poland’s Pawel Lukaszewski has found a champion in Stephen Layton, the dedicatee of this haunting 2007 setting of the Nunc dimittis. Taken from one of two discs of his compositions and sung by The Choir of Trinity College, Cambridge, its freshness of expression is typical of the composer’s work.

Schola Cantorum of Oxford’s final entry on this disc is from Ruth Byrchmore’s In the silence of the night. Commissioned by the choir in 1995, it sets three poems by Rossetti, the second and most famous of which, Song, delivers an impassioned plea to treat the bleakness of death without undue sentimentality in a work memorable for its heart-rending soprano solo.

Taken from the Grammy-nominated disc Cloudburst Eric Whitacre’s Sleep sets words written after the music itself, but you’ll need to get the album to find out why! Rapidly becoming a staple of modern choirs, this ravishing piece brings our compilation to the most fitting of conclusions.