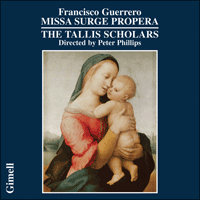 Known in his lifetime as 'El cantor de Maria', Guerrero was second only to Victoria in Spanish renaissance music. His Marian motets are celebrated as some of the most beautiful compositions of the period: we include five of the best, including Ave virgo sanctissima, one of the most loved and imitated pieces of polyphony from any country. (Peter Phillips)

It has proved difficult to find just the right place for Francisco Guerrero amongst the composers of his time. A contemporary of Palestrina, although they are not known to have met, he was the pre-eminent Spanish composer of the generation between Morales and Victoria. Like Victoria he was a church musician, yet wrote as much secular music as he did sacred. And although he made his career entirely in Spain, he owed more to Palestrina’s methods and ideals than either Morales or Victoria, both of whom lived in Rome for many years.

But the formal perfection on the surface of all Guerrero’s writing – something which is maintained in his chanzonetas and villancicos – often only serves to smooth over an emotionally complex and demanding interior. The way these opposites meet in his church music has long fascinated me and has led to this anthology. Emotion filtered through formal balance can make for especially powerful experiences, and every piece included here has something of this. Usquequo, Domine (track 6) and Hei mihi, Domine (track 8), for example, are classic examples of seemingly understated penitence; passionate in a different way are the great Marian pieces, for which Guerrero was so famed: Ave virgo sanctissima (track 11), possibly the most famous single piece of music to come from Spain in the sixteenth century, and the eight-voice Ave Maria (track 7) and Regina caeli laetare (track 12).

Guerrero lived a colourful life, the details of which were relatively well documented at the time. After studying with Morales he began his life-long association with Seville Cathedral in 1542, initially being appointed as a ‘contralto’ (apparently he was an exceptionally gifted contra alto, or high tenor). Both the cathedral chapters in Jaén and Málaga tried to entice him away, but he always found his way back to Seville where, in 1551, the authorities offered him the right to succeed the ageing maestro, Pedro Fernández. Unfortunately for Guerrero Fernández lived another twenty-three years, and it was only in 1574 that he finally took over. By then he was internationally renowned as a composer, having had his works published not only in Seville, but also in Paris, Venice and Louvain; and outside Europe, in the Spanish–American empire, his works were far better known than those of any of his contemporaries. While seventeenth- and eighteenth-century Italian composers, under orders from the Catholic authorities, tried to perpetuate the style of Palestrina, in the New World Guerrero’s music continued to be sung as if it were new, helped by its proto-baroque harmonic clarity. Indeed his Magnificat secundi toni, when published in 1974 from an anonymous eighteenth-century copy in Lima Cathedral, was taken to be an eighteenth-century work.

In 1588 Guerrero undertook a journey which truly sets him apart from every notable composer of the period: he went on a pilgrimage to the Holy Land. Leaving Venice on 14 August and travelling via the island of Zante (now Zákinthos), he visited Jaffa, Jerusalem, Beth­le­hem and Damascus before returning to Venice on 9 January 1589. On the way back his ship was twice boarded by pirates, who threatened his life and exacted a ransom. When he finally resumed his duties at Seville Cathedral the cost of publishing his music and the depredations of the pirates had placed him in such serious financial difficulties that in 1591 he was committed to a debtors’ prison. The cathedral chapter secured his release by paying off his creditors; and they also engaged Alonso Lobo to act as his assistant. In 1590 he published what proved to be a popular book about his journey to the Holy Land (El viaje de Hierusalem, which surely would benefit from a modern edition), during the course of which he wrote that he longed to return there. On 11 January 1599 he obtained another year’s leave in order to go, but delayed in starting out and died from the plague that struck Seville in the late summer.

Guerrero’s Missa Surge propera is the only one of his eighteen settings to be scored for six voices; all the others are for fewer. Its model has not been identified, but it certainly is not the motet Surge propera included here, which inhabits a quite different sound-world. The Mass has a sweep of phrase which may remind the listener of some of his Marian motets – Maria Magdalene immediately comes to mind. The polyphony seems to glow with an inner sonority, yet the melodic lines are always grateful to sing, the classic shape of them often anticipating later writing. One might use words of this kind about much of Palestrina’s music, but there should be no confusion. Guerrero’s underlying harmonic sense is so strong that he hardly ever needs to resort to block chords, instead always keeping some sense of independent movement alive between the voices, even when setting a long text in an economical way (as in this Credo). The beauty is in the stability which the harmony brings, coupled to the easy flow of the melodic ideas as they move between the contributing voices. In this Mass Guerrero favoured full textures more than was usual for him, and also liked to group the three higher voices against the three lower ones, as at the beginnings of the ‘Christe eleison’, the ‘Qui tollis’ and the ‘Agnus Dei’. The Missa Surge propera was published in Guerrero’s Missarum Liber Secundus, in Rome in 1582.

Usquequo, Domine and Hei mihi, Domine must rank as two of the most powerful penitential motets of the period. Both scored for SSATTB they were eventually both published alongside Requiem Masses. The surface of Usquequo, Domine is faultlessly spacious and sustained, the material not looking on paper – there are few dissonances or suspensions – as though it could bear the weight of these words. Yet it creates an unforgettable atmosphere, the simpler the more passionate, and nowhere more remarkable than at the first inversion chords on ‘dolorem in corde meo’. In Hei mihi, Domine the imitation at the opening is similarly architectural, though here a chromaticism in the manuscript has led to the editorial addition of two further accidentals which greatly intensify the prevailing mood of desolation. Later on Guerrero allows himself a very brief moment of madrigalian word-painting, at ‘Ubi fugiam?’ (‘Where should I flee?’), before the music culminates, as in Usquequo, in simple block chords, here to underline the words ‘Miserere mei’ (‘Have mercy on me’).

Surge propera and Beata Dei genitrix are the most substantial motets included in this collection, by virtue of having two halves. Many composers of the period, including Palestrina, liked to work with this format because it gave them the opportunity for the symmetrical restatement of material. In Beata Dei genitrix this is obviously the case when the ‘Alleluias’ we have heard at the end of the first half return at the end of the second; in Surge propera the use of the two halves is more strictly mathematical. This elaborate motet is unusual on this disc in having a long-note, so-called cantus firmus, chant part. This is given to the second sopranos, who sing an ostinato made up of the first five notes of the chant melody associated with the words ‘Veni, sponsa Christi’ (‘Come, bride of Christ’); and they also very deliberately sing these words against the voluptuous text of the other parts, thus sanctifying the sensuousness of the love poetry of the Song of Songs. Guerrero set this love poetry in the other parts with suitably diaphanous music, while tempering it with the chant which is quite severely disposed according to the kind of abstract pattern which might have been found in music of a hundred years earlier. At the beginning of the motet the chant motif starts on a C, and in five statements descends by step until it reaches F. In the second half it starts on F and rises back up to C, meaning that the piece ends with the part on its highest notes. Such a complicated marriage of texts and musical styles was not usual by the 1570s, when Surge propera was published, and it poses some exceptional interpretative challenges.

One of the features of Guerrero’s music is the number of outstanding motets he wrote on texts praising the Virgin, to such a degree that commentators in his lifetime and beyond have been tempted to say that he had a fixation about her. His contemporaries even called him ‘El cantor de Maria’. But this is really a tribute to the power of his music, since Mary has been of central importance to most Catholic composers, even if they could not match Guerrero’s balance and serenity. Beata Dei genitrix is one of the most admired, its gentle mood culminating in a plea ‘pro devoto femineo sexu’ (‘for all women devoted to God’), asking the Virgin to intercede for them. More famous still is Ave virgo sanctissima, which became so popular in Guerrero’s lifetime that it was regarded as the quintessentially perfect Marian motet and used as a parody model by a host of composers, many of them Flemish. Perhaps the most remarkable aspect of this masterpiece is that the intense emotion is generated within the confines of a canonic structure: the two sopranos parts echo each other throughout at an eight-beat interval, yet they move so smoothly and effortlessly that it would be easy to assume that there was no complexity involved. The phrase at ‘Margarita preciosa’ (‘as precious as a pearl’) is one of the loveliest in all renaissance music.

The two eight-part motets included here are also on Marian texts. Ave Maria is a classic late-renaissance double-choir setting, with short answering phrases between the groups which culminate in sonorous eight-part sections. The alternatim method is especially effective at ‘ora pro nobis peccatoribus’ (‘pray for us sinners’). Regina caeli laetare, by contrast, is a more through-composed eight-part setting, with Guerrero picking out the vocal groupings at random. Behind this teeming polyphony are repeated chant statements – whole sections built up on them in fact – though, as with so much else on this disc, the writing is so fluent the listener can easily not notice them. To be able to write eight-part counterpoint of this calibre has been the dream of many composers, but very few in the history of music have been able to rival what Guerrero shows us here.