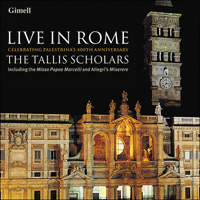 The Tallis Scholars Live in Rome

Peter Phillips directs The Tallis Scholars in the historic concert celebrating Palestrina's 400th anniversary, filmed in the Roman Basilica of Santa Maria Maggiore where the composer sang as a choirboy and later became maestro di cappella.

This Dual Layer DVD is playable in all regions on PAL compatible players. Choose between 2 presentations and switch between them during the concert:

Illustrated Performance
Priceless artworks in the Basilica illustrate the sung texts and optional captions name the artworks and artists.

Pure Performance
100% Tallis Scholars with optional sub-titles for the sung texts.
The total duration of each presentation is 81 minutes and 34 seconds.

The aspect ratio is 4:3. The main presentation has Stereo sound in Linear PCM and the Surroud sound is Dolby Digital. The Audio Bonuses are in both Stereo and Surround in Dolby Digital.

The Booklet and subtitles are in English, Deutsch, Español, Français, Italiano.

February 2nd 1994 presented an opportunity which, we knew, would not come again: to celebrate the work of the most influential and arguably the greatest composer of the High Renaissance. For a group which has dedicated its work to Renaissance sacred music and which has, over the years, more or less consciously built up its performing style on the technical demands which are epitomised in the compositions of this one man, the 400th anniversary of Palestrina's death was not to be missed—the more so since his date of birth is not precisely known.

We chose the venue for our celebration with care. Palestrina worked in four of the leading Roman religious foundations: the Sistine Chapel, St Peter's, St John Lateran and Santa Maria Maggiore. It was important to me that we should sing in a space which Palestrina had actually known: this counted out both St Peter's, which in its present form was not finished until after Palestrina's death, and St John Lateran, which was completely rebuilt in the 18th century. The Sistine Chapel, on account of its size and location, is not an ideal place for a public concert; which pointed us towards Santa Maria Maggiore, whose nave and chancel, fifth century mosaics and astonishing gold-laid ceiling have survived, little changed, since Palestrina worked there, firstly as a chorister, and later as maestro di cappella. No more illustrious or inspiring building could have been found: the place where the young 'Gianetto' had received his musical education, where the excellent acoustics would first have given him an idea of what could be achieved with vocal polyphony, and one of the most beautifully decorated churches in Christendom.

We made no attempt to choose music which Palestrina might have written specifically for use in Santa Maria Maggiore, since it is in most cases very difficult to date his work more accurately than to the nearest decade, and I have never been able to detect in his writing any conscious adaptation to suit a particular building. This does not mean that his style never developed, as some pedagogues have maintained, but the changes came about slowly, partly as he gained in confidence and partly in response to the demands of the Counter-Reformation. In fact much of our programme is dedicated to late works, for double choir, which with their spacious scoring and irresistible verve seemed best to express the splendour of the occasion.

Missa Papae Marcelli shows Palestrina at a half-way stage between his early works, many of which were clearly written as apprentice pieces in the fullest Franco-Flemish polyphonic style; and the simpler, more mature style of the works for double choir. The Kyrie, Sanctus and Agnus Dei (and especially the Agnus Dei II with its mathematically complex canon) show the former, while the Gloria and Credo, though scored for six voices only, tend to the latter. As is well known, some of the impetus towards the simpler style of the Gloria and Credo was given by the Catholic Church, whose cardinals, at the Council of Trent, were to discuss ways of simplifying and making more comprehensible every aspect of the ceremony in worship, of which music formed just one element. This discussion had been predicted and to some extent inaugurated by Pope Marcellus II in 1555, when he reigned as Pope for three weeks. It seems that Palestrina wrote this Mass for Marcellus in order to prove that polyphony could be both concise and musically impressive. Even though he attempted this in only two of its five movements, his achievement was recognised at the time: when the Mass was published in 1567 it was prefaced with the words 'novo modorum genere' (broadly speaking 'a new form of expression').

But it was not the church alone which caused the simplification in musical style: the avant-garde of the day were moving fairly unanimously towards a harmonically-based, word-orientated idiom in which the craze for madrigals played a central role, thus paving the way for the Baroque. In the four double-choir motets sung on this recording, Palestrina showed that he could put this style to good effect as well as anyone and in doing so proved that he was fully abreast of stylistic developments in his later years, for all that he tended not to use chromatic harmony. Surge, illuminare shows off the antiphonal writing of these double-choir settings to perfection, recalling, in its indefatigably positive mood, the music of Palestrina's Venetian contemporaries. Palestrina's setting of the Stabat mater is not only one of his very greatest works but one of the supreme achievements of the late Renaissance period in music. It was composed around 1589-90, almost his last datable composition, and presented to the Papal Choir who jealously guarded it as an exclusive possession, to be performed by them alone every Palm Sunday.

The setting of Alma redemptoris mater presented here is a beguilingly straightforward composition with scarcely a polyphonic phrase in it. Originally conceived for two choirs which never overlap, it is often sung, as on this recording, by a single choir. With the Magnificat and Nunc dimittis we return to the bright, positive writing of Surge, illuminare, their short, punchy phrases breathlessly taken up by one choir after the other in the closest antiphony. How Palestrina managed to make this succession of ordinary chords so compelling is one of the miracles of his art. In both canticles the two choirs come together for the climaxes (which include some word-painting at 'omnes' in the Magnificat), the final passage of the Nunc dimittis just relaxing enough to admit some eight-part imitation, rare in this type of music, but yielding the most glorious conclusion.

We chose to include Allegri's Miserere simply because the opportunity of performing such a dramatic work in this beautiful building, recorded by television cameras, was too good to miss. Allegri's Miserere, despite having in effect three separated choirs, comes from a slightly different tradition from that of Palestrina's antiphonal music. This famous composition is a partially-harmonised setting of a plainchant psalm (no. 51). Half the verses are sung to chant alone (by two tenors on our recording, who make up one of the three separated groups); the other half are divided between a five-voice choir which sings more or less unadorned chords, and a four-voice more distant choir which equally sings a succession of chords, over the top of which a solo soprano weaves some highly ornate embellishments. For centuries these embellishments were improvised during the performance; in the 20th century we have become accustomed to a particularly striking version, which takes the soloist to a high C. The music, without any specific embellishments, was composed for the exclusive use of the Sistine Chapel Choir by Allegri, who worked there from 1629 until his death in 1652. The Sistine Chapel Choir's monopoly on the piece was broken during the 18th century as a result of copies being leaked in several directions at about the same time, the most famous of which was made by the 14-year-old Mozart, who copied it down from memory.

With Palestrina's double-choir Nunc dimittis sung as the encore, to a capacity audience which included representatives from the Roman curia alongside ambassadors both to the Holy See and to Italy, as well as enthusiasts from all over the world, we concluded a commemoration which will live long in the memories of all those who were there. As I stood at the end of the concert, I felt that we had touched the spirit of this unsurpassed master as never before.