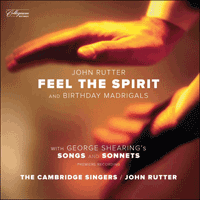 Strong, stirring spirituals and tuneful, jazz-flavoured settings of Shakespeare’s timeless lyrics are the mouth-watering ingredients of the Cambridge Singers’ album Feel the Spirit. John Rutter has written vivid arrangements of seven well-loved American spirituals for choir, with soloist Melanie Marshall and the BBC Concert Orchestra joining together with the Cambridge Singers for this world première recording.

Another notable ‘first’ is jazz legend George Shearing’s captivating cycle of Shakespeare settings, Songs and Sonnets. Those who associate George Shearing with instrumental jazz (and of course with his immortal Lullaby of Birdland) will be astonished and delighted at the youthful charm and skilful word setting of this cycle. The final touch of sparkle is added by Proms favourite Wayne Marshall’s piano with Malcolm Creese on bass.

This album, which has an Anglo-American thread running through it, is a homage to three of my favourite musical traditions—the spiritual, the madrigal, and American song—and at the same time, a homage to two remarkable Englishmen, William Shakespeare and George Shearing.

Feel the spirit is a cycle of seven spirituals arranged for mezzo-soprano soloist, choir and orchestra, written especially for Melanie Marshall. The idea came from hearing this wonderful singer’s solo interpretations of spirituals in her recitals; it seemed to me that her artistry in this area of song would be just as effective in the fuller context of choir and orchestra. With her help, I chose seven of our favourite spirituals (of which the first and last were to be purely for choir and orchestra) and I wrote Feel the spirit, which received its première in June 2001 in Carnegie Hall, New York.

Having admired jazz legend George Shearing from afar for many years—coincidentally, we were both born in London but have spent much of our working lives in America—I was delighted to get to know him personally during the 1990s, at a time when his growing interest in choral music had already found expression in Music to Hear (1985), a cycle of Shakespeare settings for choir, piano, and double bass. Thanks to a commission from Jeffrey Hunt and his Mostly Madrigal Singers in Illinois, George was spurred on to write a second Shakespeare cycle, Songs and Sonnets, which they premièred in 1999, with the composer at the piano, Neil Swainson playing bass, and myself guest-conducting. I instantly fell in love with the music—so fresh and youthful, so witty, tender and varied—and the Cambridge Singers were indeed fortunate that George not only readily consented to our recording but came along to supervise the session with an inimitable blend of encouragement and dry humour.

Presumptuously or not, I wanted to include in this album my own musical tribute to George Shearing, Birthday Madrigals, written in 1995 to celebrate his 75th birthday. These five pieces can only be called madrigals in that their texts come from the era of the Elizabethan madrigal: their musical style is only loosely madrigalian, showing a mixture of light jazz influence in Nos 1, 3, and 5, and a flavour of the English part-song tradition in Nos 2 and 4.

I discovered the text of The heavenly aeroplane in W. H. Auden’s classic edition of The Oxford Book of Light Verse. It is a folk-song from the Ozark mountains in Missouri, collected by Vance Randolph in the 1930s, doubtless with its own tune, but I was so charmed by the text, a twentieth-century updating of the familiar image of the gospel train, that I wrote a new tune for it, albeit in the slightly later style of 1950s rock and roll—another homage.

Lord of the Dance is a new arrangement of an old favourite. The melody, originally an American Shaker song called The Gift to be Simple, was popularized first by Aaron Copland’s use of it in his ballet score Appalachian Spring, and later by the English hymn-writer Sydney Carter’s striking new text, which was inspired by the traditional carol Tomorrow shall be my dancing day.

The album is completed by Skylark, one of the loveliest ‘standards’ of the golden age of American song. I wrote the arrangement for Melanie Marshall, her pianist brother Wayne, flautist Daniel Pailthorpe, Malcolm Creese on bass, and of course the Cambridge Singers. A soaring bird is an age-old symbol, sacred and secular, of the spirit. Of all the great American songwriters, Hoagy Carmichael was perhaps the most strongly influenced by the music of the southern states, including the spiritual. In more than one sense, then, his wistfully yearning song brings the album full circle, feeling the spirit.