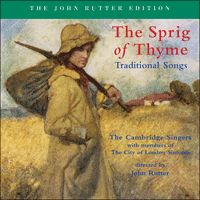 The Sprig of Thyme

For children growing up in postwar England as I did, traditional songs still formed a common musical currency. The first songs we sang were nursery rhymes like Oranges and lemons and Pop goes the weasel; at school, we warbled Early one morning and Drink to me only in singing class, and O God, our help in ages past and Holy, Holy, Holy in morning assembly; at scout camp, we endured Ten green bottles and One man went to mow. Those of us that sang in choirs were thoroughly familiar with the choral folk song arrangements of Vaughan Williams and Holst; and absolutely everyone could recognize Rule, Britannia, Greensleeves and the National Anthem. Probably none of us stopped to think that this heritage of ‘traditional’ song had been fairly deliberately created: the approved repertoire of nursery rhymes stemmed largely from a BBC radio programme called Listen with Mother, the school class singing repertoire from The National Song Book, and the hymns we knew from Hymns Ancient and Modern (middle-of-the-road late Victorian), The English Hymnal (edited by Vaughan Williams, rather more high church) and Songs of Praise (Vaughan Williams again, mildly radical and strong on social service). Vaughan Williams, who collected folk songs and saw them as crucial to a revival of our national musical consciousness, was also one of the moving forces behind the prevalence of folk songs, which, along with italic handwriting, pottery and the weaving of rush mats, were considered good for the young.

It is easy to poke fun at the worthiness, gentility and cultural nationalism of this vanished age, soon to give place to the more frantic, colourful and cosmopolitan ’60s. Yet the songs it promoted formed a more solid bedrock for a shared musical culture than today’s television jingles, pop songs and football chants. Among the numerous ‘As I went out one morning’s that fill folk song collections, you can find love songs of exquisite and fragile beauty such as O waly, waly and The sprig of thyme, drinking songs of picaresque humour such as The miller of Dee, lullabies of heart-easing tenderness such as O can ye sew cushions. These songs brought me delight and pleasure then, and they still do now, though pleasure has become tinged with nostalgia because, for the most part, they are forgotten and gone from our lives, perhaps forever. This album is an affectionate tribute to their composers and poets; a few were renowned, most were obscure or unknown, but the songs they created were famous, and I remember them fondly.