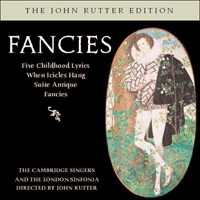 This album explores the secular works of John Rutter. Fancies is a cycle of six settings of Elizabethan poetry, described by the composer as ‘music for a summer’s evening.’ When Icicles Hang, another choral cycle with orchestra, is a winter piece, best known for its bitter-sweet setting of Shakespeare’s Blow, blow, thou winter wind. The Five Childhood Lyrics, for unaccompanied choir, take a group of simple rhymes and set them in a spirit of fun and fairytale. The Suite Antique for flute, harpsichord and strings, consists of six short movements ranging from a simple, classic ‘aria’ to an upbeat ‘jazz waltz’.

The ‘fancies’ that give this album its title are the fleeting ideas, dreams and whims that flit like Will-o’-the-wisps through the imagination of every artist. I have always thought that they were captured to perfection by the Elizabethan poets and by their collaborators, the madrigal composers such as Weelkes, Wilbye and Morley; and, looking back now on the music heard on this recording, I realize how much of it was inspired by the madrigalian spirit. Fancies was written in 1971 for the Richard Hickox Singers and Orchestra (the orchestra was later renamed the City of London Sinfonia, who play on this recording). The first performance was given in London, repeated shortly afterwards at an open-air concert one lovely summer’s evening by the River Thames in rural Berkshire, a perfect setting for it.

The Suite antique, dating from 1979, also has a Berkshire association: I was asked to write it for the Cookham Festival, to be performed by Duke Dobing and the London Baroque Soloists at a concert in Cookham Parish Church. Bach’s Fifth Brandenburg Concerto was on the programme, so I decided to write for the same combination of instruments, and to pay musical homage to the forms and styles of Bach’s day.

The Five Childhood lyrics (1973) are also a kind of ‘homage’, this time to the world of children. I chose for my texts some of the rhymes and verses remembered from my earliest years, and set them to music as simply as I could—though the last of the five, which uses a familiar nursery tune, contains a certain amount of tongue-in-cheek elaboration.

When icicles hang will forever be associated in my mind with the much-missed figure of Russell Burgess, whose Wandsworth School Boys’ Choir was such a colourful and inspiring part of the musical scene in the 1960s and 70s. Russell asked me to write a seasonal but not specifically Christmas work for a December concert given by the choir in London’s Queen Elizabeth Hall in 1973, and, in writing it, I think I unconsciously reflected some of the contradictory facets of Russell’s endearing personality: his rumbustiousness in Good ale and Hay, ay, his gentleness in Blow, blow, thou winter wind, perhaps also something of his underlying melancholy (so often to be found in great men of action) in Winter wakeneth all my care. We all lamented his untimely passing at the age of only 48, but his work lives on in the gift of singing he gave to so many young people.