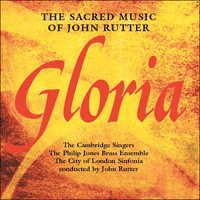 Alongside Gloria and several of Rutter's most popular shorter pieces (including For the Beauty of the Earth and All things Bright and Beautiful) are pieces especially recorded by the Cambridge Singers for this release—Cantate Domino, Arise, shine, Wedding Canticle and Hymn to the Creator of Light.

'This is a jewel of a record: even those usually frightened, in a musical context, of the word 'sacred' … should take courage on this particular occasion' (Gramophone)
'As ever the Cambridge Singers are in excellent voice … newcomers to Rutter will find this a good place to start' (Cross Rhythms)» More

The music heard on this recording represents a cross-section of the sacred choral pieces I have written over a period of some thirty years, from the 1970s to 2004. Two paramount considerations shaped it: first, the performers and occasions it was written for, and second the texts, which I always choose with great deliberation.

Gloria, the most substantial piece, was written as a concert work. It was commissioned by the Voices of Mel Olson, Omaha, Nebraska, and I directed the first performance on the occasion of a visit to the United States—the first of many—in May 1974. The Latin text, drawn from the Ordinary of the Mass, is a centuries-old challenge to the composer: exalted, devotional and jubilant by turns. My setting, which is based mainly on one of the Gregorian chants associated with the text, divides into three movements roughly corresponding with traditional symphonic structure. The accompaniment is for brass ensemble with timpani, percussion and organ—a combination which in the outer movements makes quite a joyful noise unto the Lord, but which is used more softly and introspectively in the middle movement.

Hymn to the Creator of Light, for unaccompanied double choir, was commissioned in memory of the composer Herbert Howells (whom I knew in the 1970s). The occasion was a special choral evensong in Gloucester Cathedral at the 1994 Three Choirs Festival at which a new stained glass window was dedicated to mark the centenary of the composer’s birth.

The other pieces are all anthems, primarily intended for use in the context of a church service. They range in difficulty from very simple to fairly challenging, though it was my hope in writing them that none would be beyond the reach of a capable church choir. Although the accompaniments were originally for organ (or, in the case of For the beauty of the earth and All things bright and beautiful, for piano), I enjoyed scoring them for orchestra and prefer them in this form. The unaccompanied pieces, however, (Cantate Domino, God be in my head, Open thou mine eyes, and A prayer of Saint Patrick) reflect my love of the a cappella medium. Wedding Canticle is exceptional in that I wrote it with flute and guitar accompaniment.

Some of the texts are familiar and have been set to music many times—what composer, after all, could resist God be in my head or Psalm 150?—but it was a particular pleasure to happen upon such lovely texts as Open thou mine eyes or the Gaelic Blessing and set them to music for the first time.