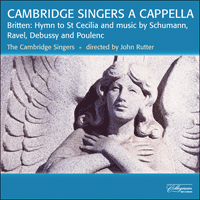 This album explores the great wealth of music written for unaccompanied choir in England, France and Germany during the Romantic era and into the twentieth century. The pure, distilled beauty of the a cappella medium inspired the composers heard on this album to some of their most poetic and delightful compositions.

Hymn to St Cecilia
This, the last of several works Britten wrote in collaboration with W. H. Auden, was planned in August 1940 when composer and poet were both living in the United States. Britten began work on the music, but, in his own words, ‘got stuck’, and did not resume until his voyage home to England in the spring of 1942. The Hymn to St Cecilia and the Ceremony of Carols were completed aboard the Swedish steamship Axel Johnson, and the Hymn received its first performance by the BBC Singers in the same year on November 22nd, St Cecilia’s Day and Britten’s birthday. Auden’s text, dedicated to Britten, consists of three poems which the composer set as three movements roughly corresponding to a symphony, the first of them marked Tranquillo e scorrevole (calm and gliding), the second a rapid Vivace inspired by Mendelssohn’s ‘fairy’ scherzos, the third (the longest and most complex) Andante con moto. Each movement ends with an invocation to St Cecilia, binding the hymn into one. Britten’s musical language in the Hymn is simple and pure, with much use of mellifluous major triads and transparent choral textures. There are a number of deliberately backward-looking features: slow-moving tenor and bass parts against faster upper voices, recalling medieval cantus-firmus techniques; a Purcellian ground bass at the start of the third movement; and instrumental imitations near the end, another Purcell reference, specifically to his St Cecilia’s Day odes which Britten clearly wished to acknowledge as the precedent for his unusual and lovely hymn.

Vier Lieder aus dem Jungbrunnen
These four delightful little pieces for female voices form a self-contained group within Brahms’s set of twelve Lieder und Romanzen, Op 44. They were early works written in Hamburg around 1860, at which time Brahms was conducting a women’s chorus he had founded. He later revised and published some of the music he wrote for this choir as his Op 44.

Vier doppelchörige Gesänge, Op 141
Choral music formed a not insignificant part of Schumann’s output, and he valued choral singing highly enough to have conducted a male-voice choir and instituted a mixed-voice one during the 1840s while he lived in Dresden. It was probably with the Dresden choir in mind that he composed the Vier doppelchörige Gesänge in 1849. These, his only works for double choir, were published soon after his death, grouped together as Op 141, though apparently the fourth of the set, Talismane, was conceived as a separate piece. In style, they have much in common with his solo songs, filled with a sense of ardour and Romantic imagination that marks them out as unmistakably Schumannesque.

Lay a garland
The intriguing figure of Robert Lucas Pearsall, composer and antiquarian, still largely awaits rediscovery. After early law studies in Bristol, he suffered a minor stroke and thereafter lived the life of a musical dilettante, mostly in Germany where he settled in 1825. Contact with the Cecilian movement there led him to cultivate elements of ‘antique’ style in his compositions, most of which were choral and smallscale. Of his twenty or so published madrigals, Lay a garland (1840) is perhaps the best-known. Despite similarities to Mendelssohn and S. S. Wesley, it is a work of striking individuality and beauty. Pearsall wrote uncommonly well for voices: his choral music has that indefinable ‘ring’, instantly recognizable in the work of an authentic choral composer.

The splendour falls on castle walls
To music-lovers familiar with Benjamin Britten’s memorable setting of The splendour falls in his Serenade for Tenor, Horn and Strings, it may come as a surprise that Delius set the same words equally memorably twenty years earlier, in 1923. Both composers responded imaginatively to the line ‘the horns of Elfland faintly blowing’, Britten with a real horn, Delius by imitating the sound of horns with a male-voice semichorus that he directs to be placed apart from the main choir. Both composers stamped personal fingerprints on their settings, Britten with his favourite piled-up thirds, Delius with his gently sliding and elusive chromatic harmony. Delius’s setting, which deserves to be heard more often, was written for Charles Kennedy Scott’s Oriana Madrigal Society, which had given the first performance of Delius’s two pieces To be sung of a summer night on the water three years earlier.

Trois Chansons
Ravel’s musical response to the horror of World War I (in which he participated as a transport corps driver) was characteristic: rather than wave flags in any obvious manner, in two wartime pieces he asserted the values of French culture as it had been in an earlier and more civilized era. Le tombeau de Couperin, completed in 1917 in its piano version, took the form of a Baroque dance suite, and the Trois Chansons (1914–15) paid homage to the Renaissance chanson, a form characterized by its pastoral atmosphere and simple tunefulness. The texts are Ravel’s own and just as typical of his personality as the music he wrote for them, Nicolette with its wry humour, Trois beaux oiseaux du Paradis with its tender fairy-tale symbolism (the three colours of the birds being those of the French flag), and Ronde, a virtuosic display of tongue-twisting verbal dexterity worthy of Stephen Sondheim (whose Into the Woods inhabits a similar imaginative world to the Trois Chansons). The inventiveness and skill of Ravel’s handling of the a cappella medium makes it all the more regrettable that the Trois Chansons is his only work for unaccompanied choir.

Trois chansons de Charles d’Orléans
‘Caplet, vous n’êtes qu’un vilain’, comme disait Charles d’Orléans en parlant de L’Yver’—thus Debussy wrote in a letter to his friend André Caplet in 1908, some evidence, perhaps, that France’s great fifteenth-century poet was in his thoughts. In the same year he wrote the second of the Trois chansons, Nos 1 and 3 having been written earlier, in 1898. They were published as a set in 1909, Debussy himself conducting the première in Paris. A minor puzzle has always surrounded the solo in No 2: the published edition (presumably overseen by the composer) assigns it to a contralto, whereas the manuscript designates it for tenor, more appropriately since the speaker is clearly male. The three pieces make a varied and successful set; as with Ravel, we can only regret that Debussy wrote no more for unaccompanied choir.

Chansons françaises
For Poulenc, as for all his compatriots, the experience of living in occupied France during World War II was traumatic. His patriotism found choral expression in his substantial and complex work of 1943, Figure humaine for a cappella double choir, the text of which ends with the word ‘liberté’. Then, two years later, he asserted national identity in an altogether different way with the tuneful and charming Chansons françaises. These are settings of traditional folk-rhymes; according to Poulenc’s biographer Henri Hell, the melodies are the composer’s own, although one or two (such as Margoton) have become so absorbed into French folklore that they have virtually turned into folk songs.

A cappella is the term for choral music without instrumental accompaniment, also applied to choirs performing without accompaniment. Literally translated from the Italian, it means ‘in the style of the chapel’, probably a reference to the Sistine Chapel in Rome where a tradition of unaccompanied choral singing has been maintained since the Renaissance. Nowadays the term has lost its exclusively sacred connotations and can refer to any unaccompanied choir or choral music, sacred or secular.

The music heard on this recording is selected from the great wealth of a cappella choral repertoire written in Germany, France and England in the nineteenth and twentieth centuries. The purity and beauty of the sound of unaccompanied choir was always recognized, but in the seventeenth and eighteenth century virtually no music was written for choir alone, since voices were almost invariably combined with instruments during this period. Under the influence of the Romantic movement, with its love of the past, interest in a cappella singing began to revive in the early nineteenth century, a revival which paralleled the slightly later pre-Raphaelite movement in the visual arts. The Cecilian movement was active in Germany and France, while in England madrigal societies began to revive secular unaccompanied singing for mixed voices, and the glee clubs (like their German counterpart the Liedertafeln) cultivated male-voice music. These trends can be seen at work in the music of Pearsall and Schumann, the two earliest composers represented here: Pearsall wrote madrigals for the Bristol Madrigal Society, and Schumann his Op 141 pieces at the time he was directing a newly-established choral society in Dresden. A little later Brahms instituted a female-voice choir in Hamburg, conducting and composing a cappella music regularly. By the end of the nineteenth century the a cappella medium was firmly re-established, though it retained archaic overtones: Debussy’s Trois chansons de Charles d’Orléans and Ravel’s Trois Chansons both deliberately evoke the style of the Renaissance chanson. Even for the generation of Poulenc and Britten, a sense of looking back remained: Poulenc set traditional rhymes in his Chansons françaises, while Britten used ‘old’ compositional devices in his Hymn to St Cecilia. Yet Britten instinctively realized and brought to the fore a more crucial quality of the a cappella medium: its essentially pure, distilled nature, enabling it to reflect the inner soul of music itself. It was no accident that unaccompanied choir was his chosen medium for setting poetry invoking a saint regarded as the ultimate in purity, while at the same time dealing with the profound and mysterious process of musical inspiration.