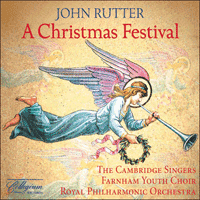 O come, all ye faithful
This renowned Christmas hymn—Adeste, fideles in its original Latin—first appeared in print in an English collection of 1751, Cantus diversi. The compiler, J. F. Wade, was a Catholic music copyist based in Douai, who may himself have composed the tune; the anonymous text is a poetic expansion of the phrase ‘Venite, adoremus Dominum’ which is proper to Christmas Day matins. During the nineteenth century the text was translated into English and the music underwent successive alterations, the hymn not assuming its familiar present form until it was included in The English Hymnal in 1906.

Gaudete (Rejoice)
The source of this spirited carol is a Finnish published collection of 1582, Piae Cantiones, which contains 74 (mostly) sacred songs said by the compiler, Jacobus Finno, to have been widely sung in Nordic cathedral schools. Several other items in this valuable collection have become Christmas ‘standards’: Personent hodie, In dulci iubilo, Of the Father’s heart begotten, Resonent in laudibus and (to a secular text) Good King Wenceslas. Michael Neaum’s attractive arrangement of Gaudete, which preserves the original harmonies of the refrain, was written for the Cantamus Girls’ Choir in the 1970s.

The Shepherd’s Carol
Bob Chilcott’s musical career began as a chorister at King’s College, Cambridge, and this, one of the loveliest of his carol settings, was written for its 2000 Christmas Eve Festival of Nine Lessons and Carols. The anonymous modern text was suggested to him by the Dean.

Nos galan (New Year’s Eve)
The merry, dance-like tune of this carol is widely familiar to the text Deck the hall with boughs of holly, but the original Welsh text is unrelated to it, though it does share a New Year theme. Words and music first appeared in a 1784 collection Musical and Poetical Relicks of the Welsh Bards edited by the Welsh harpist Edward Jones.

I wonder as I wander
The musical folklorist and singer John Jacob Niles collected this haunting carol in the Appalachian mountains in 1933 (he later claimed it was an original composition of his own, which cannot be verified). It was first published in his collection Songs of the Hill Folk in 1934 and soon became widely known, both from Niles’s own solo performances and in choral arrangements. The present version, written for the 2004 Christmas Festival, is for mezzo-soprano, harp and strings, with an important part for solo viola.

Ave Maria
The words of the Ave Maria are those of the Angel Gabriel in St Luke’s gospel as he brings Mary the news that she will be the mother of Christ, and there are innumerable musical settings. The present one, written in 2006, was dedicated to Lydia Smallwood, whose premature death in that year deprived the Cambridge musical community of one of its best-loved and most valued members.

Tomorrow shall be my dancing day
This carol, which, in its eleven-verse entirety, outlines the whole life of Christ, was one of the jewels of an important English collection, William Sandys’s Christmas Carols, Ancient and Modern of 1833. The age-old connection between religion and the dance is clearly to the fore, both in the text and in the waltz-like melody. John Rutter’s arrangement for upper voices was originally written with harp accompaniment as part of his carol cycle Dancing Day (1973); he later made the present version with orchestra.

Rejoice and be merry
The occasion for this new setting of a traditional English text was a request in 2003 from the Washington Cathedral Choral Society for a carol accompanied by brass ensemble and handbells (replaced by glockenspiel and tubular bells in this recording). The dedicatee was Dr J. Reilly Lewis, longtime director of the choir.

El Noi de la Mare (The Son of the Virgin)
This tender Catalan lullaby, believed to be of sixteenth-century origin, is a folk-song with seasonal text, its style reflecting the musical culture of Catalonia. Devotees of the guitar will recognize the melody as a favourite John Williams recital encore (it was originally transcribed by the great Spanish guitarist Miguel Llobet). The present arrangement was written especially for Clara Sanabras, soloist in the 2006 Christmas Festival.

A Christmas Overture
Nigel Hess is a multifaceted composer and conductor active mainly in the area of music for films, television and the theatre. He studied music at Cambridge University, where he was Music Director of the Footlights Revue; from 1981-5 he served in the same role for the Royal Shakespeare Company, writing music for over twenty productions. His subsequent career includes music for many major films and television dramas, together with a growing catalogue of concert music.

His vivacious and colourful Christmas Overture, commissioned for the 2007 Christmas Festival, proved an instant success with audience and orchestra alike. Traditional carols, skilfully juxtaposed and interwoven, provide the thematic material. They are, in order of their appearance: Ding dong! merrily on high, Deck the hall, Il est né le divin enfant (enchantingly scored for pastoral woodwind), Infant holy, infant lowly (lyrical cor anglais and violin solos), Personent hodie (a fanfare-like call to attention), We wish you a merry Christmas (a jovial fugue), and Angels, from the realms of glory which brings the overture to a majestic close. Fragments of other carols appear along the way to enrich the texture of what is surely one of the most attractive orchestral pieces yet written for the festive season.

Born on a new day
John David, a Cardiff-born songwriter, record producer and instrumentalist, originally wrote this abidingly fresh and affecting piece as a secular song—called New day—on the theme of the environment, and it was popularized by the King’s Singers in the 1980s. One of the present members of the group, Philip Lawson, followed the centuries-old contrafactum tradition in writing an alternative sacred text as recorded here, creating a captivating new seasonal song. Peter Knight’s arrangement for the King’s Singers (slightly adapted here for mixed voices and strings) is nothing less than a classic.

Magical Kingdom
The sense of wonder and enchantment experienced by children at Christmas time provided the inspiration for this song, which was written in 2003 for the noted London choir Children’s Voices, whose director June Keyte has encouraged numerous composers including Sir Peter Maxwell Davies to write for her choir.

Mary’s boy child
Many choral musicians around the world remember Jester Hairston fondly. Descended from plantation slaves, he rose from rural poverty in North Carolina to become a widely recognized songwriter, arranger (mainly of spirituals), singer, choral director, and film actor. He wrote Mary’s boy child in 1956, and it immediately became a No 1 hit in a recording by Harry Belafonte. The relaxed gracefulness of its melody and aptly unadorned retelling of the Christmas story in its lyric have gained it a lasting place in the repertoire.

Esta noche (This night)
The infectious dance-like spirit of this anonymous folk-carol has made it a favourite both in Spain and in the New World: versions have been found in Chile, Puerto Rico and Peru. The present arrangement was written for the 2006 Christmas Festival.

Sleigh Ride
Throughout his life Delius felt a strong affinity with Norway, spending summers there in the 1880s and forming an important friendship with Grieg. He later reminisced of spending Christmas Eve 1887 at the composer’s home in Bergen, where he played the original piano version of his Sleigh Ride—probably much to Grieg’s pleasure, because Delius’s portrayal in music of a lively sleigh ride which eventually comes to rest in the stillness of a northern winter’s night is clearly inspired by Grieg’s style without being a slavish copy. Delius—who was still a student at the Leipzig Conservatory—made the familiar orchestral version a year or two later, and, helped by the advocacy of Sir Thomas Beecham, the piece has remained deservedly popular.

The Virgin Mary had a baby boy
Edric Connor (1915–68) was a singer, folk-song collector and (like Jester Hairston) actor, who assembled a collection of the traditional songs of his native Trinidad in 1945. This was later published after he moved to England, and his own performances helped to popularize the songs in it, including The Virgin Mary had a baby boy, which is in the calypso style. The present arrangement was written for the massed forces of Melanie Marshall, adult and children’s choirs, audience and orchestra in the 2004 Festival.

New Year
This, one of the few carols celebrating the coming of the New Year, was written in 2006 at the request of the organist and choir of Sandringham Church, who wished to offer a seasonal tribute to HM The Queen in her 80th birthday year. It was first performed in Sandringham Church, in the presence of the Queen and members of the royal family, on New Year’s Eve 2006. The version with orchestra followed in 2007.

I wish you Christmas
John Rutter wrote this new Christmas song (one of his few secular seasonal songs) for the 2006 Festival.

Hark! the herald angels sing
In common with many carols and Christmas hymns, Hark! the herald angels sing has come down to us in a form drastically altered from its original. Wesley’s text of 1739—which began Hark, how all the welkin rings, Glory to the King of Kings—has been amended by various hands for doctrinal or poetic reasons, and Mendelssohn’s music (which the composer said would ‘never do to sacred words’) was originally a male-voice chorus from a cantata written in 1840 to celebrate the 400th anniversary of the invention of printing. None of this detracts from the splendour of the hymn as we now have it, and it provides a welcome reminder that Christmas is an inclusive festival where stylistic purity has never been a priority.

Have yourself a merry little Christmas
This brief and infinitely touching song was written by the then novice team of Hugh Martin and Ralph Blane for the 1944 MGM film Meet Me in St Louis; it has remained their most enduring creation, memorably sung in the film by Judy Garland playing Esther, a young girl cheering up her little sister as their family faces leaving the home they love in St Louis to move to an uncertain future in New York. Garland’s performances of this song at troop concerts, coming at a time when many servicemen and women were parted from their families, reportedly brought her audiences to tears.

In recent years the annual Christmas Festival concerts I have been privileged to conduct in London with the Royal Philharmonic Orchestra have given me particular pleasure, not least the experience of hearing a Royal Albert Hall audience of over 5000 people sing the two great Christmas hymns which frame the event.

This recording brings together some of the artists and music featured in our concerts. Much of the music has been specially written or arranged, and is recorded here for the first time. In addition to my own choir the Cambridge Singers, I am delighted that our performers include the marvellous Farnham Youth Choir, and three of my all-time favourite soloists, Elin Manahan Thomas (whose fluency in Welsh puts me to shame), Clara Sanabras (ditto Spanish), and my long-time friend and founder-member of the Cambridge Singers, Melanie Marshall. Thanks to the miracles of recording technology, we have also been able to add the majestic sound of the Royal Albert Hall organ, so masterfully played by Dr John Birch.

I have been associated with the music of Christmas for many years now. It has always brought me great joy, and I am sure it always will.