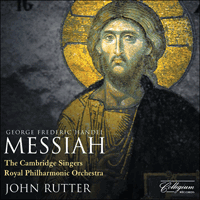 Among Handel's twenty or more oratorios, Messiah has long been the most-often performed, holding a place of honour in the hearts of audiences everywhere.

This latest offering from Collegium Records features the complete oratorio, recorded in the wonderful acoustic of the church of All Hallow's, Gospel Oak, London.

'Not surprisingly, John Rutter's is essentially a traditional performance, but with lively tempi and no lack of expressive feeling; and it is very well recorded indeed … altogether a fine set which will give much pleasure' (The Penguin Guide to Compact Discs)

It has been calculated that Handel committed more notes to paper than any other composer before or since. But even by his phenomenal standards of productivity, he composed Messiah at white heat. In the six days beginning 23 August 1741 he drafted 100 sides of ten-stave paper; he wrote the whole oratorio in three weeks.

Yet even as he forged ahead Handel was, very unusually for him, uncertain about when and where he would perform this new work. He had probably already received his invitation to give concerts in Dublin, and it may be for that reason that he wrote Messiah for a sparse orchestra of strings, trumpets and drums only, with none of the usual woodwind with which he so liked to colour his solo numbers: he did not know what orchestral forces might be available (he added woodwind parts later, when he began performing Messiah in England). He also wrote for a combination of soloists—soprano, alto, tenor and bass—which is normal now, but which he had never used in his previous oratorios, and may have been a way of spreading the recruitment risk. Yet he seems not to have been definite about the Dublin trip, for with hardly a break after finishing Messiah he began his massive oratorio Samson, with much larger forces and surely intended for England.

Handel left us frustratingly little correspondence or paper trails other than his music, and it is from facts like these that we have to glean his intentions. With hindsight it is clear that Messiah was a turning point in his career.

He had come to England thirty years before, fresh from youthful grounding in counterpoint in Germany and melody in Italy, to make his mark as a composer of powerful music for church and state occasions and as a master of the new and fashionable Italian opera. It was as an opera composer that he became famous and busily employed throughout the 1720s. But the 1730s were difficult for him, prompting him to great creative developments. In this decade he began to be his own concert promoter, finance director, fixer and conductor as well as composer: the first completely independent major composer in history. As such, he was always looking for ways to please public taste that would also satisfy his urge to experiment in music.

Competition from new rival Italian opera companies, and a growing demand for identifiably English music, with English words and English singers, led him to accept librettos from friends and acquaintances for English oratorios: unacted, unstaged works for soloists, chorus and orchestra, given as concert performances in a theatre. He had already written oratorios about the Messiah in Italy (La resurezzione, 1708) and for Germany (the Brockes Passion, 1716) when Charles Jennens offered him the libretto of Messiah. He did not feel the moment was right for it, but put it on the shelf for nearly three years. His turn from Italian opera to English oratorio was gradual and unplanned; for several years he put on mixed seasons of both types of works, and although he had given his last Italian opera performance a few months before he began Messiah, he himself did not know this or intend it to be the case.

Without Messiah, Charles Jennens would be unknown today. But without Charles Jennens, there would be no Messiah. The idea was his, and he compiled the libretto before offering it to Handel. It was not their first collaboration. Fifteen years Handel’s junior, shy, touchy, cultivated, the Oxford-educated son of a Midlands landowner enriched by the family iron business, Jennens was a good amateur musician and a devotee of Handel’s music. He had copies made for himself of every note that Handel wrote, he made the long journey to London each season to hear Handel’s latest compositions, and he fostered Handel’s career by giving him English texts to set to music.

In January 1739 Handel successfully produced his oratorio Saul, to a libretto by Jennens based on scripture. On 29 December that year, writing to his fellow Handel enthusiast James Harris about their plan to compile a libretto for Handel based on Milton’s poems L’Allegro and Il Penseroso, Jennens commented:

I have been preparing a collection for him from Scripture, which is more to my own tast & (by his own confession) to his too; but I believe he will not set it this year, being anxious to please the Town with something of a gayer turn.

The ‘collection from Scripture’ is the first known mention of Messiah. Handel’s enthusiasm for the Milton project gave Jennens time to do justice to his chosen theme. By 10 July 1741 he was able to write to his friend Edward Holdsworth:

Handel says he will do nothing next Winter, but I hope I shall perswade him to set another Scripture Collection I have made for him, & perform it for his own Benefit [taking the bulk of the box office] in Passion Week. I hope he will lay out his whole genius & Skill upon it, that the Composition may excell all his former Compositions, as the Subject excells every other Subject. The Subject is Messiah.

The phrase ‘another Scripture Collection’ is a clue that Jennens was also the compiler of the libretto for Handel’s only previous oratorio with words taken directly from the Bible, Israel in Egypt. Jennens was a devout adherent of the Protestant church, believing in the fundamental truths and divine inspiration of the Bible. Like many sincere Christians of his time, he was disturbed by the increase of Enlightenment freethinking. Respect for scientific proof, rationalist criticism of sacred texts, the disruption of old social orders as London became Europe’s finance capital—all contributed to weaken the authority of Christian revelation, and in response, dozens of clergymen and concerned laymen published hundreds of sermons, tracts, and multi-volume folios defending the doctrine that Jesus was the Messiah prophesied in the Old Testament through whom God offered salvation to mankind. Messiah is the most lasting of these declarations of faith, because Jennens had the unique idea of communicating the essentials of Christian doctrine through Handel’s music.

At this point in his career Handel was finding the English public hard to please and was considering a return to Germany. Jennens hoped that, as the climax of a London season, the new oratorio would revive the composer’s popularity and income. But Handel did not fulfil Jennens’ plan to introduce Messiah to a theatre audience in London during Holy Week. Taking the new score to Ireland, he carefully waited to perform such a novel work until he had won Dublin hearts with two highly successful subscription series of some of his other oratorios, odes, and serenatas, and then he produced Messiah not in a theatre, but in the New Music Hall, Fishamble St, on 13 April 1742. Along with his principal performers, he gave his services free for the benefit of three Dublin charities—a fact much commended in the local press.

No composer could have wished for a more enthusiastic reception of a new work. The capacity audience was deeply appreciative, the Bishop of Elphin reporting that even ‘great numbers’ of the ‘young and gay’ listened with serious attention. Not only was it sold out, the reviews were universally positive:

Words are wanting to describe the exquisite delight it afforded to the admiring crouded Audience. The Sublime, the Grand, and the Tender, adapted to the most elevated, majestick and moving words, conspired to transport and charm the ravished Heart and Ear. (The Dublin Journal)

But it was a different story when Handel premiered Messiah in London next year, as part of a season of English-language works in his usual venue, a theatre. The papers printed objections to the utterance of the sacred word of God in a place associated with low-life actors and scurrilous plays, and Handel suffered something akin to a nervous breakdown. He was not helped by Jennens’ outspoken disappointment with Messiah. Seeing the score now for the first time, Jennens initially felt that Handel had not always done justice to himself as a composer or to the word of God as divine truth. The collaborators, both strong-willed and intransigent, had a rift. It was Handel who made the first conciliatory move, and his mollifying letter (now on show in his house in London’s Brook Street) testifies to his respect for Jennens, as a librettist and as a musician: ‘Be pleased to point out those passages in the Messiah which You think require altering.’

Messiah did not become an established favourite in England until the 1750s, when Handel began to perform it for charity, as he had done in Dublin. Benevolent and wealthy London society flocked to hear Messiah in Captain Coram’s new Foundling Hospital ‘for the education and maintenance of exposed and deserted young children’, and Handel later bequeathed to the charity a manuscript score and a set of parts that can still be seen there.

The association of Messiah with the Foundling Hospital must have had a special resonance for Handel, since the city of his birth, Halle, was (and is) home to a similar foundation: the Franckesche Stiftung, a large-scale orphanage for the rescue and training of foundlings, and still a major educational charity, was established in 1698 by the Pietist philanthropist August-Hermann Francke, who was also professor of Oriental languages at Halle University when Handel attended it. Handel would have recognised the Foundling Hospital as a kindred charity.

By 1784 the music historian Charles Burney could write of Messiah that ‘this great work has been heard in all parts of the kingdom with increasing reverence and delight’. It reached Berlin two years later, and Mozart performed it in Vienna in 1789, adding or rewriting the parts for woodwind, brass and timpani. Both were anticipated by the William Tuckey, retired choirmaster of Trinity Church, New York, who on 16 January 1770 made extracts from Messiah the second part of a concert in George Burns’ Music Room in the City Tavern on Broadway. The advertisement showed real understanding of Messiah: ‘A Sacred Oratorio, on the Prophecies concerning Christ, and his coming’. Further New York performances of extracts followed, and within the next decade Messiah reached Boston and Philadelphia. The first complete Messiah in North America was in Boston in 1818, at Boylston Hall, establishing a tradition of annual performances there.

It was Handel’s normal practice to revise his works for each season in which he revived them, to suit the soloists he had assembled in his company. This means that there is seldom a definitive version of a Handel opera or oratorio. Messiah is no exception; for example, when for the 1749–50 season Handel acquired the brilliant young alto castrato Gaetano Guadagni (later to be the creator of Gluck’s Orfeo), he composed for him new settings of ‘But who may abide the day of his coming’ (originally for bass, then for tenor), and ‘Thou art gone up on high’ (originally for bass, then for soprano). There is no ‘principal’ version of Messiah; the original Dublin performance cannot be reconstructed with certainty. The present recording follows what have become the most widely accepted choices in performance.