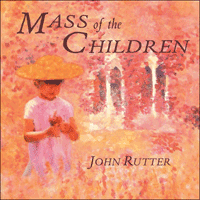 Mass of the Children & other sacred music

Rutter's Mass of the Children was written in response to a desire to compose a work that would bring children and adults together, in the same way that performances of Britten's War Requiem had done for him when a school chorister. In five movements, the work has rapidly been taken up by choirs the world over. Also on the album are several previously unrecorded anthems and motets.

'The performances are excellent, the Cambridge Singers fresh-toned and sensitive to direction, the City of London Sinfonia playing with skill. And, whatever else might be said about Rutter’s music, it is expertly written to bring out the best in singers and players alike, both amateur and professional' (Gramophone)

Mass of the Children was written in late 2002 and early 2003. The occasion of its first performance in February 2003 was a concert in New York’s Carnegie Hall involving children’s choir, adult choir, soprano and baritone soloists, and orchestra. I had always wanted to write a work combining children’s choir with adult performers, not only because I find the sound of children’s voices irresistible but also because I wanted to repay a debt. As a boy soprano in my school choir I had been thrilled whenever our choir took part in adult works with children’s choir parts, such as the Mahler Third Symphony and the Britten War Requiem, and years later I remembered this experience and wanted to write something that would give children a similar opportunity to perform alongside adult professionals.

The text of Mass of the Children is that of a standard Latin Missa brevis (that is, a Mass not including a Credo section) to which several relevant English poetic texts have been added. The first and last of these are taken from Bishop Thomas Ken’s renowned morning and evening hymns for the scholars of Winchester College, giving the whole work the framework of a complete day, from waking to sleeping, within which other texts and moods appear like events in that day or landmarks in a life.

The other pieces included in this recording are shorter and all written since the mid-1990s. Look at the world (1996), a simple anthem with a text on the theme of the environment, was written to mark the 70th anniversary of the Council for the Protection of Rural England. To every thing there is a season (1997), originally intended as the finale to a longer work, sets a familiar passage from Ecclesiastes in a song-like style, taking its character from the ‘time of peace’ referred to in the final line of the text. Wings of the morning (2002), another Old Testament setting, came about as a result of a request from the Durban Serenade Choir for a new choral piece to sing on their first UK tour. The sixty rich Zulu voices of the choir made an inspiring sound at its premiere in Cambridge. A Clare Benediction (1998), named in honour of my alma mater, Clare College Cambridge, is one of a number of choral blessings I have written over the years, in every case for a person or institution of special significance to me. I will sing with the spirit (1994) is dedicated to another institution, the Royal School of Church Music, who requested a simple anthem to serve as a theme song for their anniversary appeal.

The final three pieces on the album form a group insofar as they are all for choir without orchestra and on a more demanding level chorally. Musica Dei donum (1998), which has an important part for solo flute, is a setting of an anonymous text first set by Lassus in 1594 that speaks of the power of music to draw, to soothe, and to uplift. Originally written for the choir of Clare College, this piece was subsequently included in A Garland for Linda, a cycle of nine choral pieces by different composers in memory of Linda McCartney. I my Best-Beloved’s am (2000) was written for the BBC Singers and first performed by them at a concert in Canterbury Cathedral on the theme of the seven sacraments. I was assigned the theme of marriage, and found my text by combining the Latin nuptial responses (sung by the tenors and basses) with a lovely and little-known poem by the Jacobean Francis Quarles (sung by the sopranos and altos). Come down, O Love divine (1998), for double choir, has a curious history. It was commissioned by the Musicians Benevolent Fund for their annual St Cecilia’s Day service, a splendid event held (in rotation) in Westminster Abbey, St Paul’s Cathedral, or Westminster Cathedral, with their three choirs joining forces and musicians past and present gathered in a spirit of thanksgiving and celebration. As it turned out, the 1998 service was to be held in Westminster Abbey, which was then in the midst of some rather public unhappiness, the details of which were widely reported at the time and need not be recounted here. I suspect that my choice of texts was influenced by these dramatic events: in particular the invocation ‘Veni, Sancte Spiritus’. Like most musicians, I don’t relish conflict and confrontation, even when they do not involve me personally, yet out of this particular turmoil came a piece which, I think, speaks with a different voice from any of my others.