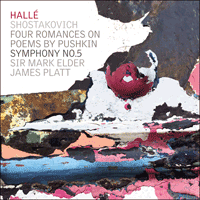 Sir Mark Elder’s acclaimed Shostakovich interpretations continue with this live concert recording of one of the composer’s most popular symphonies, coupled with a work which reveals one of the symphony's most enigmatic secrets.

Symphony No 5 in D minor Op 47
Having completed the Four Romances on Poems by Pushkin at the beginning of 1937, Shostakovich began work on his next major creative project, the Fifth Symphony. On the face of it, he had an impossible balancing act to pull off. The Soviet authorities were apparently looking for some gesture of repentance: some sign that Shostakovich had turned his back on the ‘anti-people’ modernist ‘distortions’ of his opera The Lady Macbeth of the Mtsensk District and had re-aligned his thinking in accordance with the precepts of ‘Socialist Realism’. To satisfy those precepts, the new symphony must be seen to be positive, in particular affirmative of the brave new realities of Stalin’s Communist Paradise. Yet Shostakovich had too much integrity simply to sell his soul. Was it possible in some way to speak the truth, to those with ears to hear, while managing ultimately to force enough of a smile to convince the Soviet powers that he had learnt his lesson?

It is, of course, entirely possible that Shostakovich simply didn’t allow himself to think in such terms: that he just got on with the business of writing, hoping inwardly that what he was producing would reflect the wonderful words set in ‘Rebirth’, the first of the Four Pushkin Romances, with their faith in art that can survive even the most brutal oppression and desecration. Whatever the case, there has been plenty of controversy—some of it brutal enough in itself—about the ‘meaning’ of the Fifth Symphony. This was largely fuelled by the appearance, in 1979, of the book Testimony, which claimed to be nothing less than ‘the memoirs of Shostakovich’, as ‘related to and edited by’ the Russian musicologist Solomon Volkov. One passage in particular has been much quoted. It concerns the Fifth Symphony’s supposedly ‘exultant’ finale, and it draws a direct comparison with Russia’s iconic tragic political opera:

But, even if Shostakovich did read the music that way in 1973, when Testimony was allegedly dictated to Volkov, how certain can we be that he saw it so clearly and categorically in 1937? It is certainly possible to read the Fifth Symphony’s thunderously emphatic ending as ‘irreparable tragedy’, as Testimony puts it—to hear the thunderous concluding major-key fanfares and drumbeats as grimly ironic. Yet, given the unmistakable reference to the Pushkin song ‘Rebirth’ just before the final onslaught, it is possible too that there might also be an element of personal victory, or at least pride, here—that inwardly Shostakovich realised that he had created something that, like the beautiful artwork in Pushkin’s poem, might survive the worst barbarian attack, even if he, its creator, might not.

If it was a conscious gamble, it paid off. The authorities gave the Fifth Symphony an unequivocal thumbs-up, while the audience at the Leningrad premiere roared their approval. The ovation lasted around half an hour. But for many in that audience the new symphony spoke of something very different from victorious socialism. While Stalin’s cultural henchman Aleksey Tolstoy lauded Shostakovich for depicting the emergence of a suitably reconstructed artist from ‘psychological crisis’, others felt that the tragic element remained unresolved—that the expressions of sorrow and pain were simply too strong to be edged out by the emphatic triumphalism of the ending. That is the view that tends to prevail today.

Overall, Shostakovich’s Fifth Symphony does appear to chart a conventional, romantic ‘darkness to light’ progress, from minor-key anguish, desolation and violence to major-key rejoicing—as in Beethoven’s famous Fifth Symphony, upheld in Soviet Russia as the musical embodiment of revolutionary ideals. But, unlike the Beethoven, there is a lot more darkness than light in Shostakovich’s Fifth. The starkly arresting opening soon yields to lamenting lyricism, sparsely accompanied, and then to a lovely second theme (strings and harp), both exquisitely tender and profoundly elegiac. The startling entry of the piano (deep metallic bass notes) leads to a faster, increasingly fraught middle section in which the earlier lamenting lyricism is subjected to savage transformations by the brass. After a cathartic climax, the second theme returns, lighter at first, but with growing shadows. The ending of the movement is wonderfully poetic: a poignant violin solo, ominous distant brass and timpani, and the weirdly childlike tinkling of the celesta.

Humour helped Shostakovich survive in many of his worst crises, and it comes to the fore now in the second-movement scherzo: gruff at first, with mocking militaristic fanfares and then what sounds like a deliciously inebriated violin solo.

But the Largo that follows contains the most eloquently anguished music in the whole symphony—a marked contrast to Beethoven’s much more upbeat slow movement. Scored only for woodwind, strings, harp and pitched percussion (the brass are silent), it sings of profound desolation, in the beautiful string threnody that begins it, and especially in the long, lonely, sparsely accompanied woodwind solos at its heart. The Largo’s ending, with its soft bell-like sounds for harp and celesta, does seem to offer a kind of peace …

… but this is brusquely dismissed by the finale’s brass-dominated, militaristic opening. Is it ‘exultant’ or heavily oppressive? To some extent, how we hear it depends upon the performance, but the movement’s climax, with its electrifying gong stroke and dissonantly pounding timpani, clearly represents some kind of crisis. The music withdraws into reflection, then comes the quotation (on harp) from ‘Rebirth’, the first of the Four Pushkin Romances—and, for a moment at least, light does appear to dawn. Then, however, comes the effortful final crescendo, with those putatively ‘triumphant’ fanfares and drumbeats. Triumph? Tragedy? Or both? Shostakovich was a master of ambiguity, and there is often more than one way of reading his musical statements. Either way, it’s shattering.

Four Romances on Poems by Pushkin Op 46
In 1936 Dmitry Shostakovich endured one of the worst ordeals ever suffered by a composer of genius. On the face of it, things had been going well for him. His opera The Lady Macbeth of the Mtsensk District had been a colossal international success, and had run for nearly two years in Russia. Then, one day in late January 1936, Shostakovich opened his copy of the state newspaper Pravda and found himself denounced in a stinging review of the opera headlined ‘Muddle, Not Music’. The article was unsigned, but it was clear that the content represented the views of the Soviet Union’s great ‘Leader and Teacher’, Joseph Stalin himself. The article included the chilling observation: ‘It is a game of clever ingenuity that may end very badly.’ Eminent Russian artistic figures were ‘disappearing’ regularly during this period of grinding oppression—Shostakovich knew well enough that he might be next.

As at other periods of crisis, Shostakovich realised that work would be his salvation—personally, if not politically. Very soon he was to embark upon one of his most important utterances, his Fifth Symphony. But before that, on the pretext of honouring the centenary of Russia’s greatest poet, Shostakovich composed his Four Romances on Poems by Pushkin, originally written for voice and piano in a version premiered in Moscow in 1940. It doesn’t need much reading between the lines to recognise that the four poems Shostakovich chose reflect both his own position during what became known as Stalin’s ‘Great Terror’ and that of his fellow citizens—a message underlined by the composer’s beautiful, darkly powerful settings.

For listeners who know the Fifth Symphony, there are telling pre-echoes of some of its ideas and colours in the Pushkin Romances—echoes emphasised in the composer’s own orchestration of the first three songs; the last song was orchestrated by the composer and writer Gerard McBurney, who knows Shostakovich’s style as well as anybody today. It is in the first song, ‘Rebirth’, that the most telling connection with the Fifth Symphony occurs—its repeated harp figure returns literally just before the Symphony’s final long crescendo. True art, sings the soloist, will survive oppression and barbarian vandalism—a moving statement of faith that has ultimately been vindicated.