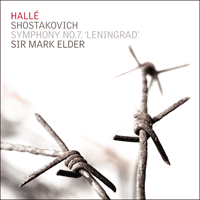 ‘The inner movements, almost wherever you sample them, show Elder with his finger … surely on the pulse and his orchestra … resourceful in its colours and sheer heft’ (Gramophone)
‘Elder and the Hallé uncover the sense of despair and surreal absurdity even in the “triumph” of the finale; and while the march is properly violent, many of the solos are played with touching poignancy’ (The Times)

Few symphonies became so instantly recognisable, indeed so sensationally popular, as Shostakovich’s ‘Leningrad’ Symphony, a work first performed on 1 March 1942. With the world in the grip of an unprecedented conflict, the symphony’s apparent message of resistance and ultimate victory was soon to provide audiences both in the Soviet Union and in the West with an intoxicating emblem of hope and defiance. Because of the work’s far-reaching success, Shostakovich became not just a national but an international icon: at home it won him the coveted Stalin Prize First Class; and in the United States an image of the composer in the heroic guise of a voluntary fireman appeared on the front cover of Time magazine.

The Soviet leader Stalin fully realised the propaganda value of the work both at home and abroad, and for once—at least for a time—allowed Shostakovich to enjoy the limelight (though enjoy it he did not). The work had its detractors, among them the composer Béla Bartók, who was later to parody it in his Concerto for Orchestra (premiered in 1944), yet official political and media channels portrayed the piece as a rallying call in the fight against Nazism. Revelations that much of it was composed in Shostakovich’s head before the war, and his own claim that it was as much a response to Stalin’s brutality during the notorious purges of the 1930s, only came later.

Shortly after the Nazi blockade of Leningrad (now St Petersburg) began in September 1941, Shostakovich and other members of the artistic elite were airlifted out of the city in the interests of their safety. After a spell in Moscow, he was moved on to Kuibyshev (now Samara) and here he completed the score of the ‘Leningrad’ Symphony, dedicating it to the besieged people of his home city, hundreds of thousands of whom were to be starved or bombed to death that winter. Soon after its rapturously-received premiere in Kuibyshev official approval came via Stalin’s artistic henchman Alexander Fadeyev: ‘Let us try to create now, during the war, works that are real, serious, big, but ones that can be used right now as weapons, not set aside for later—Make it for now, like [Shostakovich’s] Seventh Symphony.’ It was performed all over the Soviet Union, broadcast extensively and the print media devoted page after page to the work.

Leningrad, however, had to wait until 9 August 1942 for what was one of the most extraordinary musical performances of all time (the score of the symphony having been airlifted into the besieged city some months before). With Hitler’s army poised for a final assault, the Soviet artillery unleashed a salvo of high-calibre shells to protect Leningrad’s already bomb-damaged Philharmonic Hall. Here an undernourished and motley-looking orchestra (several members of which had died during the rehearsal period) performed Shostakovich’s musical tribute to his birthplace under the baton of a skeletal Karl Eliasberg. In the spirit of patriotic defiance, loudspeakers outside the hall ensured the music was audible both to fellow Leningraders unable to gain access to the concert and to the German troops manning their lines just miles away. Inside the hall people wept and wildly applauded in equal measure. At the end of the performance the ovation lasted for over an hour. An official report stated: ‘Never will anyone present forget this concert—When they played the finale, the entire audience stood up. You couldn’t sit and listen. It was impossible.’

If the American media of the day are to be believed, by now a microfilm of the score had found its way to the United States in a manner befitting a spy novel: by plane from Kuibyshev to Teheran, by car to Cairo, by plane once again through Africa to London and then across the Atlantic to New York. Described by the press as ‘the battle royal’, the race to conduct the US premiere was won by Toscanini, who did so in New York on 19 July 1942. The concert was broadcast nationally and numerous US performances followed. Rarely had a serious musical work attracted so much instant attention. In America and Britain Shostakovich’s symphony came to symbolise a new-found, if fragile, unity between East and West as they cast ideological differences aside and joined forces to combat the Nazi threat.

In keeping with its ambitious scale and purpose, the symphony is scored for vast orchestral forces, including an extensive battery of percussion, a piano, two harps and an array of extra brass instruments that strengthen the climactic moments in the first, third and fourth movements. That anything like this number of musicians was assembled for that historic first Leningrad performance was something of a marvel, given that all but 15 of Eliasberg’s Leningrad Radio Orchestra had either starved to death or joined the military. In the event the orchestra was augmented by musicians temporarily released from their duties at the front.

The music
According to Shostakovich, the agile opening of the first movement ‘was inspired by the month of August in Leningrad’, though the music also hints at less sunlit, more militarised scenes to come. The tempo relaxes and the strings introduce a gentle theme described by the composer as reflecting ‘love for a people who have become the bulwark of culture, civilisation and life’. After ethereal solos for piccolo and violin, the side-drum enters almost imperceptibly to gradually become dictator of the extensive episode that follows—a section featuring what Shostakovich described during the war as an ‘invasion’ theme (though he later refuted this, instead claiming it represented evil in general).

Surely influenced by Ravel’s audacious Bolero (1928), the episode consists of no fewer than 11 increasingly loud and menacing repetitions of a deliberately banal, brusque and mechanical motif (actually a partial quotation of ‘Da geh’ ich zu Maxim’ from Franz Lehár’s operetta The Merry Widow, a favourite of Adolf Hitler). Seemingly innocuous at first in its pizzicato innocence, gradually the theme becomes ever more grotesque. Eventually, with the side-drum rhythm still insistent, a folk-like Russian bear of a theme appears as if to confront the approaching malevolence. The music builds to an impassioned unison climax and, after a passage of almost overwhelming power and intensity (the extra brass instruments have by now joined the fray), the maelstrom subsides to make way for an extensive and lyrical bassoon solo. The mood is then one of valediction and apparent nostalgia for more innocent times. Fittingly the side-drum, now accompanying a trumpet echo of the ‘invasion’ theme, has the final say.

Before the symphony’s premiere Shostakovich titled its four movements ‘War’, ‘Reminiscence’, ‘Russia’s Vastness’ and ‘Victory’, though typically he later removed the titles. Certainly, the two outer sections of the second movement—a ‘lyrical intermezzo’, as the composer once described it—are a world away from the driven scherzo movements of Shostakovich’s Fifth and Sixth Symphonies. The second violins introduce its delicately tripping first theme, the rhythm of which forms the accompaniment to an expansive melody initially for oboe and then in modified form for cor anglais and (briefly and passionately) cellos. Some of the menace of the first movement returns in a highly contrasted central episode that begins with a shrill melody on the E-flat clarinet, one that could almost have been written by Shostakovich’s arch rival, Prokofiev. The material of the opening section is eventually reprised, the second theme now assigned to a subterranean bass clarinet, flutes providing vaporous flutter-tongue accompaniment and harps ghostly punctuations. The movement finishes as enigmatically as it had begun.

A series of piercing, Stravinsky-like chords announces the opening of the Adagio slow movement. This almost liturgical-sounding material then alternates with a passionate, recitative-like declamation by the violins. According to Shostakovich, the section that follows reflects a poetic vision of Leningrad at twilight. Here a sweetly expressive theme introduced by a flute over a gently plucked accompaniment seems to offer a degree of consolation amid all the unremitting tragedy around it. The central section, by contrast, is a turbulent, Mahlerian affair. By the end of the movement, however, after the opening material is heard again (the second theme first heard in the flutes now scored for the darker-hued violas), an uneasy stillness prevails.

Without a pause the finale emerges ominously into life over a pregnant timpani roll. Gradually the tempo quickens and the music steadily builds into a very Russian revel, themes darting in from all sides. Just as it seems the demonic energy has dissipated, Shostakovich dashes expectations with a series of percussive snapped pizzicatos (the strings being plucked in such a way that they rebound off the fingerboard, an effect Mahler pioneered in his own Seventh Symphony and one that Bartók used extensively). The movement’s slower central section is, surely, a final requiem for the dead; however, while it does make a poignant return towards the end, the remainder of the work is largely a defiant gesture of affirmation. Finally, with a shift from C minor to C major we emerge from any lingering darkness into jubilant light, the ‘August in Leningrad’ theme heard at the very beginning of the symphony now transformed into an exultant hymn of triumph. Whether against Hitler, Stalin or tyranny in other forms, victory, at least of sorts, has surely been won.