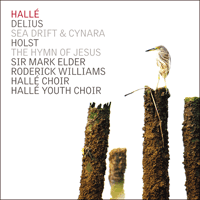 Gustav Holst The Hymn of Jesus Op 37
During the First World War Gustav Holst had, for some of the time, lived at Thaxted in Essex, where he put on some adventurous and moving choral concerts in the church. For this choir he wrote his beautiful setting of the unaccompanied carol This have I done for my true love, which begins ‘Tomorrow shall be my dancing day’. He was very taken with the connection between dancing and religious ritual and began to look for other such poems to set.

In this way he discovered in 1917 the lines ‘Ye who dance not, know not what we are knowing’ in The Hymn of Jesus from the Apocryphal Acts of St John. Immediately he set to work on what turned out to be a large‑scale work, yet highly concentrated and intense. He made his own translation of the text from the Greek, with the help of a pupil. He then went on war service to Salonika, so the Hymn was not completed and published until 1919. Donald Tovey, on reading the score, wrote to Holst: ‘If anybody does not like it, he doesn’t like life.’

The first public performance was conducted by Holst in London in March 1920. No doubt some of the audience were shocked by this unconventional and unfamiliar kind of religious music, but generally it was appreciated and several performances followed.

The Hymn of Jesus opens with an orchestral Prelude based on two plainsong melodies: Pange lingua, played by the trombones (Holst’s own instrument) and cor anglais; and then, after some swaying triads for flutes, Vexilla regis on the organ. The latter tune, played in austere fourths, is taken up by a distant choir of sopranos answered by the male voices with Pange lingua.

After a pause, the Hymn itself begins dramatically with the full double chorus’s ‘Glory to Thee, Father!’, each line of the hymn being attached to the next by the women’s semi‑chorus’s ‘Amen’ (sopranos in A minor, altos in F minor). Each petition is repeated thus and there is a remarkable passage where spoken words create an effect that many an avant-garde composer of today might envy.

An andante section begins at ‘Fain would I be saved’, with each division of the choir alternating. When the words ‘Fain would I be known’ are reached, an allegro in 5/4 bursts in and conveys the exaltation of ‘Divine Grace is dancing’.

Yet the spiritual core of this work is to be found in the solemn discords to which the choruses sing ‘To you who gaze, a lamp am I’, an extraordinary musical representation of the mystical experience that had haunted Holst since he was 18, when he first heard the ‘Sanctus’ of Bach’s B minor Mass at a Three Choirs Festival performance in Worcester Cathedral. The ecstasy continues with the quieter singing of ‘To you that know, a mirror’.

Now the plainsong themes return at ‘Give ye heed unto my dancing’, reaching a crescendo at ‘For yours is the Passion of man’. The bare fourths are augmented now and the trumpets blaze out with a ferocity reminiscent of ‘Mars’ in The Planets. Bassoons play the Vexilla regis in 12/8 and the sopranos chant a wordless and ecstatic ‘Ah’. After a climax on the theme of suffering, the trumpet’s Pange lingua is heard above the choir’s ‘Learn how to suffer’. The music now becomes more serene, though there is one more outburst of exaltation in the coda before the last solemn ‘Amen’.

Frederick Delius Sea drift
Delius is often said to have come to his full maturity with the composition of Appalachia (1902-03) his large-scale introduction, theme and variations for solo voice, chorus and orchestra on an old Negro slave song. Sea drift (1903–04) was Delius’s next major work for voices and orchestra and like Appalachia also has an American subject, insofar as the text is drawn from Walt Whitman, practically the national poet of the USA in his time. Delius used parts of the untitled second poem in the section entitled ‘Sea-drift’ in Whitman’s Leaves of Grass, omitting a few lines and words and making a few verbal changes. The tale of the two seabirds, the lament of the male for the loss of the female and what it reveals to the boy observer, by analogy, of the nature of love, grief and the human condition, moved Delius greatly. The result was perhaps the most poignant of all his major works.

Delius dedicated Sea drift to the German composer Max von Schillings, at that time Intendant of the Berlin Opera, who had also written tone-poems about the sea. At this point in Delius’s career his music was more appreciated in Germany than in his native country. The first performance took place in a German translation—as Im Meerestreiben—at the Festival of the Allgemeine Deutsche Musikverein in Essen on 24 May 1906, with Josef Loritz as the soloist, conducted by Georg Witte. It was repeated in Basle in 1907, and the score was first published with the German title prominent above the English one in smaller type. Nevertheless Delius certainly composed Sea drift in English: in a letter to the critic Ernest Newman he said he ‘could not have done otherwise, as the lovely poem inspired my music’. It was over two years later that Henry Wood introduced the work, in English, to Great Britain, at the 1908 Sheffield Festival, with Frederic Austin as the soloist.

In contrast to the clearly sectional form of Appalachia, and as another stage in the development of his essential idiom, he produced a fluid and highly unified tone-poem, though the single movement has seven constituent spans, determined by the flow of the text. ‘The shape of it,’ Delius told his amanuensis and biographer Eric Fenby towards the end of his life, ‘was taken out of my hands, so to speak, as I worked, and was bred easily and effortlessly of the nature and sequence of my particular musical ideas, and the nature and sequence of the particular poetical ideas of Whitman that appealed to me’. Orchestra, soloist and chorus partake equally in the expression of intense emotion, and the evocation of the sea and its many moods. The soloist’s melodic line mingles recitative and arioso in a particularly supple synthesis, while the chorus comments on the action, its contributions seamlessly woven into the general texture of the music. The interweaving of solo voice and chorus suggests how the boy’s observation achieves union with the spirit of the bird as he watches it. The richness of the choral harmony disconcerted its first performers, but it was this work more than any other which launched the composer’s international reputation.

The opening evokes the tidal ebb and flow of the sea with the rise and fall of the bass line, combined with a poignant falling woodwind phrase. Indeed the motion of the waves, whether peaceful or stormy, is suggested by the music throughout the work. The chorus describes the mating seabirds (‘guests from Alabama’) and the tale is taken up by the baritone, who is both the narrating voice of the boy and the voice of the male bird, for in Whitman’s scheme the boy begins to learn of suffering and bereavement through the bird’s experiences. The exalted view which Whitman takes of the seabirds’ love for one another is mirrored in Delius’s music, which seems to contain a number of subtle reminiscences of Wagner’s Tristan und Isolde. Although at first the mood is one of joy and rapture, tragedy strikes as the female disappears with no explanation (‘Maybe kill’d’) and a great storm comes. The remainder of the work is occupied by the he-bird’s laments, his imaginings that he sees or hears his love. At one point the chorus takes the role of the she-bird’s spirit, telling him not to delude himself. At length, in a plangent and poignant climax, he realises that all his hopes are in vain.

In the final pages, which are among the most ravishing that Delius ever penned, the music recalls their ‘happy life’; but in the darker mode of solitude, ‘We two together no more’. The he-bird has accepted the inevitable, but grieves still. Delius’s imaginative identification with Whitman’s poem resulted in one of the most profound evocations of loss in British music.

Cynara
Ernest Dowson died in 1900 at 32 and, like Delius, had spent much of his life in France. Considerably influenced by Swinburne and Verlaine, he was perhaps the archetypal poet of the ‘Decadent’ movement of the 1890s, and his poetry is no longer much read, though at least one famous line—‘They are not long, the days of wine and roses’—has attained a measure of immortality. The ardour and languor of his verses were however ideal matter for Delius, who took a sequence of Dowson poems as the texts for one of his greatest works, the Songs of Sunset for soloists, chorus and orchestra (1906-8). During 1907 he sketched a setting of one of Dowson’s then best-known poems, Cynara, for baritone and orchestra (some of the sketches also include a chorus): this was originally intended to become part of Songs of Sunset, but Delius decided it was inappropriate and laid it aside.

Early in 1929 Sir Thomas Beecham, who was planning a Delius Festival towards the end of the year, asked Delius if he had any unpublished work for voice and orchestra which could be premiered at one of the concerts. Delius, now blind and semi-paralysed, had just begun working with his new amanuensis Eric Fenby, and the completion of Cynara became their first major task. The draft was essentially complete up to the words ‘Then falls thy shadow, Cynara’ in the last of the four verses, and with painful slowness the composer managed to dictate the rest of the song to Fenby, who wrote long afterwards ‘I shall never forget my thrill when I took down the telling chord on the trombones on the final word “Cynara”!’ Delius had resolved that if the result of his dictation failed to sound well he would give up trying to compose. Before leaving for England he had three £5 notes sewn into his jacket to give to Fenby if the result pleased him: it did, Fenby got his money, and they went on to create Delius’s late masterpieces. Some time after the first performance (sung by John Goss on 18 October at Queen’s Hall, with Beecham conducting the BBC Orchestra) Delius extended the ending to make reference to the opening bars, and the work was published with a dedication to the memory of Philip Heseltine (Peter Warlock), who had made the vocal score and shortly after, like Dowson, had died young.

Who was Cynara? In Classical literature she was the mistress of the poet Horace, who tantalized him, left him, and (also) died young, leaving him unable to shake off her memory in later love-affairs. Dowson’s poem refers to one of Horace’s Odes, in which she is mentioned. Hopefully it does not detract from the magic of Delius’s setting to know that the original of Dowson’s ‘Cynara’, according to his friend W.B. Yeats, was the daughter of an Italian restaurant keeper in London. With its yearning violin solo, overpowering sense of hedonistic melancholy, brief dance-episode and highly effective ending, it is a fortunately preserved reminder of Delius at the height of his expressive powers.