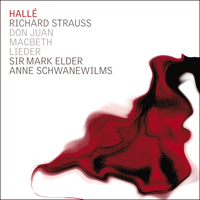 ‘I must say that the versions by Mark Elder of Don Juan and Macbeth were a wonderful surprise, and they can certainly hold their own against some of the most famous interpretations, past masters included’ (Classical.net)» More

Macbeth is Strauss’s first tone-poem, in spite of its opus number (23, whereas Don Juan is Op 20). He began it in the spring of 1887, when he was 22, and completed it the following January, declaring to a friend that it represented a ‘completely new path’ for him. He sent the score to his mentor, the great conductor and pianist Hans von Bülow, who criticised the ending, saying (reasonably enough) that a work about Macbeth should not end with a triumphant march for Macduff. Strauss took the point and revised the ending but Bülow—like Strauss’s father Franz—was still shocked by the dissonance, extraordinary as that seems to us today. The work was played privately at Meiningen in 1889 but not publicly until 13 October 1890 at Weimar, where Strauss was a conductor at the court opera. After the experience of conducting it himself, he decided to revise the orchestration. ‘There wasn’t enough brass in it’, he told his sister, ‘so I am adding a part for bass trumpet to capital effect.’ He also thought that ‘too many inner parts prevent the principal themes from standing out clearly’. He conducted the revised (third) version in Berlin on 29 February 1892. It was warmly acclaimed, even by Bülow ‘in spite of all its acerbities’.

Nevertheless, Macbeth has remained the least known and performed of Strauss’s tone-poems, somewhat unjustly because it is a strong and dramatic piece, prophetic in several respects of the opera-composer that Strauss was to become. There is no attempt rigidly to follow the plot of Shakespeare’s play. The music is a character study of Macbeth and his wife, each depicted at first by two themes. The first of Macbeth’s is a bold, militaristic theme in D minor, the second a subtler melody illustrating his instability. Lady Macbeth is drawn first in A major in an appassionato theme for woodwind and strings portraying her feminine allure, then a theme indicating conflicting elements of her complex nature. After this exposition, the development section is a dialogue between the couple, each being allotted an extra motif. His is marked dolce while hers is insinuating.

A fanfare-type motif—kingship, perhaps—with which the work had opened now returns in richer mode to illustrate Duncan’s arrival at the castle. All the protagonists’ themes are further elaborated, with Lady Macbeth’s dominating. The knocking at the door which alarms Macbeth after the murder leads into a second episode based on Macbeth’s themes and culminating in a repetition of his expository section and the death of him and his wife. Quiet fanfares for Macduff begin the coda, based mainly on Macbeth’s dolce theme.

Don Juan was written in 1888, a year after Macbeth and performed at Weimar about a year earlier, on 11 November 1889. With this masterpiece, Strauss at the age of 25 was recognised as the most prominent young German composer (by June 1902 it had had 600 performances). Its turbulent, impassioned music was inspired by his love affair with Dora Wihan, estranged wife of a famous cellist. The subject was suggested not by Mozart’s opera but by a play he had seen and by Nikolaus Lenau’s verse-drama (1851). The tone-poem opens in thrilling and exhilarating fashion, a flurry on the strings crowned by ringing trumpet tone. This passage seems not merely to depict Don Juan’s life-style but to herald the arrival of an important composer—‘Here I am, and here I stand!’ As in Macbeth, there is no detailed ‘plot’, just a series of vivid episodes. Juan’s flirtations and conquests are illustrated by memorable melodies, the most eloquent of them an oboe solo of nostalgic warmth and beauty. Strauss spins this out with magical resource and, instead of a conventional recapitulation, follows it with a marvellous new Juan motif for four horns. This becomes a second development section, depicting Juan at a masked ball. This exciting and vividly scored episode merges into recapitulation of the horns’ theme, even more impressive, and the return of the work’s opening flourish. Juan allows himself to be killed in a duel and his life slips away on tremolandi for the strings. ‘The fuel is all consumed and the hearth is cold and dark’—this quotation from the Lenau poem is written on the autograph score.

The seven Lieder on this disc were written—alongside several tone-poems and two operas—between 1894 and 1906, Strauss’s most prolific period of song composition which followed his marriage to the soprano Pauline de Ahna. They gave many recitals together until her retirement in 1906 and many of his songs were written with her voice in mind. Most were composed for voice and piano and orchestrated later, sometimes several years later, but Die heiligen drei Könige aus Morgenland (The Three Holy Kings from the East) was conceived as an orchestral song. Composed in October 1906, it is dedicated to Strauss’s mother and is one of his very few works with a religious theme. But he would have been attracted to Heinrich Heine’s poem because of the opportunities it offered for realistic orchestral illustration—the ox’s bellowing on the brass, the child’s crying on violins with trills on woodwind, the light of the star on celesta and two harps. Trumpets and drums and an abundance of triads, thirds and triplets refer to the Three Kings’ royal status. The key is C major, warm and expansive, and the voice-part grows ecstatic when it reaches the last word, ‘sangen’. This is the cue for a long and glowing epilogue for orchestra.

Waldseligkeit (Woodland Ecstasy) was composed on 21 September 1901 but not orchestrated until June 1918. It is a prime example of the rapturous soaring line of which Strauss was a master and it is enough to say that it is dedicated to Pauline and that its last line is ‘I am completely my own: yet all yours’. Wiegenlied (Cradle Song) was composed to a text by Richard Dehmel on 22 August 1899 and orchestrated a year later in time for Pauline to give the first performance at Elbersfeld in July. The melody is one of Strauss’s most beautiful. In the piano version an arpeggiando figure persists almost throughout. Strauss gave this to three solo violins (later violas) and he put a footnote on the score to say that ‘according to the singer’s breath-control the tempo of the song is changeable, like the favours of a woman, yet these arpeggios are only possible in a certain tempo’. Pauline often sang Wiegenlied in company with Meinem Kinde (My Child, text by Gustav Falke) which was composed on 8 February 1897 while Pauline was pregnant with their son Franz. This gentle cradle-song was orchestrated in 1900 for 10 solo instruments (2 flutes, 2 bassoons, 2 violins, viola, cello, double bass and harp).

When Strauss married Pauline on 10 September 1894, he gave her the four songs of his Op 27 as a wedding present. Morgen! (Tomorrow!), to a poem by J. H. Mackay, is perhaps the most frequently performed, best loved and even perhaps the best of all his songs. He made the orchestral version—strings, harp and woodwind only—on 20 September 1897. A solo violin leads the long slow introduction, being joined by the voice as if in the middle of a sentence—the voice enters on a G sharp whereas the song is in G major. The voice soars and dips until the great melody deepens into recitative-like coda and the solo violin leads to the final, yet inconclusive, chord.

Das Rosenband (The Rose Garland) was composed on 22 September 1897 with orchestral accompaniment—the piano version followed later in this case. The poem by Klopstock had also been set by Schubert, but Strauss’s version is more elaborate, its fluent and graceful melodic line wholly characteristic. A final cadenza on the word ‘Elysium’ is followed by a violin solo accompanied by flutes which anticipates by 50 years the epilogues in the Four Last Songs. Pauline gave the first performance in Brussels in November 1897. With Befreit (Set Free) we come to one of Strauss’s very greatest songs, composed on 2 June 1898 but not orchestrated until September 1933 as a gift for Viorica Ursuleac for creating the role of Arabella. The poem is by Dehmel, who thought the music was ‘too soft-grained’, though few would perhaps agree. The thrice-repeated refrain of ‘o Glück!’ is of special poignancy. A quotation from this song occurs in the ‘Works of Peace’ section of the tone-poem Ein Heldenleben which Strauss completed in December 1898.