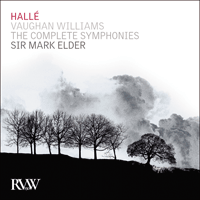 The Hallé enjoyed a particularly rich relationship with Vaughan Williams in the last decade of the composer's life, and it is with a justifiable sense of pride that this new cycle of the nine symphonies comes with a host of pictures and recollections from the orchestra's archive.

The Hallé and Vaughan Williams
Ralph Vaughan Williams is just one composer with whom the Hallé has a tradition, and a reputation for interpretation, that is partly based on the friendship between him and conductor Sir John Barbirolli, like Richter and Elgar before them.

It is fair to say that until Sir John’s arrival, Vaughan Williams had been somewhat neglected by the Hallé. The first performance by the Orchestra of any of his works was not until 8 March 1923—The Wasps. Despite having been premiered in 1910, A Sea Symphony was only performed for the first time in Manchester in November 1923, at a Hallé Concert conducted by Sir Hamilton Harty, with Miss Carrie Tubb and Herbert Hayner as soloists and of course the Hallé Choir.

Symphony No 6 received its Manchester premiere in March 1949. Sir John and the Hallé were to make Symphony No 6 particularly their own, playing it across the country no fewer than 28 times in just over two years. A performance from the Cheltenham Festival in 1948 was broadcast, and Michael Kennedy records in his biography of Sir John that the friendship between the composer and Sir John began in earnest in 1949, when Vaughan Williams came to hear the Orchestra rehearse the sixth symphony in the Sheldonian in Oxford.

An undoubted high point in the friendship between Vaughan Williams and JB, was certainly the dedication of Symphony No 8 to ‘Glorious John’. The composer had bestowed this sobriquet on his friend after the world premiere of Sinfonia antartica in 1953. Symphony No 8 received its first performance in May 1956 and again the Hallé took it around the country, performing it 20 times in 12 months, from Newcastle to London, Cheltenham, Bristol, Swansea, Leeds and Bradford to name but a few. Amongst many photographs in the archive these show the working relationship between the two men.

In his turn Sir John chose to mark the composer’s 85th Birthday with a concert of his works. As well as Symphony No 8 the audience heard the hymn All people that on earth do dwell (and were invited to sing along with the Choir), the Wasps overture, the London Symphony and the Fantasia on a Theme of Thomas Tallis. Vaughan Williams came to Manchester for what was to be the last time, and when he came on to the platform at the end of the concert the resulting standing ovation lasted for five minutes. This concert was the second in the Hallé’s centenary season, and Vaughan Williams’ Flourish for Glorious John was performed in the Free Trade Hall a fortnight earlier, receiving its world premiere: 'This Fanfare tribute commemorates the happy association of Sir John with the Hallé Orchestra in its Centenary year.' (The centenary season was launched outside with a fanfare from the roof of the Free Trade Hall!)

Another high point of the friendship was in December 1950, when Sir John was presented with his Gold Medal from the Royal Philharmonic Society. This was done after a concert at the Royal Albert Hall, which had included a performance of Symphony No 6. It was Vaughan Williams who made the presentation, and the speeches of both men were reproduced in the January 1951 issue of the Hallé Magazine.

RVW: Tonight we are here to do honour to one of those wizards who can take the dry bones of crotchets and quavers and breathe into them the breath of life. Now what is the secret of Barbirolli’s power? Wagner used to say that it was the business of the conductor to find out where the melody lay, and I think part of Sir John’s magic lies in the fact that he could always spot the melody—however unpromising sometimes … The conductor plays on his orchestra and I know that Sir John would be the first to admit that without this magnificent instrument to play on much of his magic would be powerless. And I know that the Hallé Orchestra for their part, realise that, proven metal though they all are, they would not be able to ring true unless fashioned and moulded by their conductor. So together they form a great and mighty army, and together they march to victory.

JB: Dr Vaughan Williams, if such a thing were possible I feel that the great honour that has been conferred upon me tonight has been intensified by the pride and pleasure I feel in receiving it from your hands. I hope that by our performance, whatever its shortcomings, of your symphony you have felt something of the gratitude and—may I say?—the affection we have for you and for all you have done to enrich our lives by the study and performance of your music … it is a wonderful thing that whenever I have played this work the greatness of it has been apparent immediately and due honour has been paid to its inspiration.

Symphony No 9 was first performed by the orchestra in Manchester in October 1958, only six months after it had received its world premiere in London. It was conducted by Sir John Barbirolli and was performed as a tribute to the composer, who had died in August.

A final mention must be made of a concert in Sheffield on 21 March 1952 with Vaughan Williams conducting the Sea Symphony, and Barbirolli in the cello section!