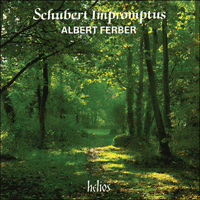 Throughout his short working life Schubert wrote many sonatas for his own beloved instrument the piano; yet curiously enough, his only sets of piano pieces—the Moments Musicaux, D780, Impromptus, D899 and D935, and Drei Klavierstücke, D946—are all late works. (Earlier single movements either belong to unfinished sonatas or stand alone.)

The Impromptus were written during the latter half of 1827, which also saw the completion of masterpieces such as the song-cycle Winterreise, the Piano Trio in E flat, and the great C major Symphony. Like so many of Schubert's works, their subsequent history was chequered: D935 did not appear in print until eleven years after his death: and though movements I and II of D899 were published soon after they were written, III and IV did not see the light of day until thirty years later—with the third movement printed in G instead of G flat and its bar-lengths halved in order to make it easier for amateurs to read.

It has sometimes been suggested that the Impromptus are sonatas in disguise; and Schumann even wrote that D935 could be made into a fine three-movement sonata by omitting the third movement which, for some inexplicable reason, he found "wholly devoid of invention or fancy'. This is of course nonsense, for the opening movement in each set is quite untypical of Schubert's sonata form; the second movement of D899 is not in the least like a normal scherzo, minuet, or slow movement; and neither last movement has the feeling of a sonata-finale. It is a mistake, therefore, to think of these works as pseudo sonatas; they are groups of beautiful and finely contrasted pieces, and should be enjoyed as such.

Four Impromptus, D899
Probably composed during the summer and autumn of 1827. Schubert left the piece untitled, but Tobias Haslinger, the publisher of the first edition of I and II, wrote at the head of the autograph 'Impromptu, No. 1 in C-moll'. Possibly this was at Schubert's suggestion, for he himself used the title for D935.

I- Allegro molto moderato (C minor)
After a single fortissimo double-octave, calling for the listener's attention, the movement proper begins. It is lyrical throughout and built from three related yet sufficiently contrasted subjects, which may be called A, B and C. Section A moves in four-bar phrases, each of which is immediately repeated in a new harmonization and layout; B, which is centred on A flat and always accompanied by flowing triplets, is an extended melody that begins with the same rhythm as A; and C, also in A flat, rounds off what is not unlike a sonata-form exposition by dwelling on the closing figure of B. But there the resemblance to sonata-form ends, for there is no obvious recapitulation until C returns in the key of G, but otherwise unchanged. Thereafter, either below or above an immensely long triplet pedal G (now the dominant of C), fresh light is thrown on the opening subject, until the' pedal finally resolves on C itself and the movement comes to a quiet close.

II- Allegro (E flat)
In A-B-A form, with a long coda based on B. Section A consists entirely of feathery right hand triplets that fly up and down the keyboard to the accompaniment of a short-long rhythm in the bass. A final crescendo leads to B, in the key of B minor, where the mood changes dramatically. Though the previous left-hand rhythm persists, a powerful new four bar theme is developed in unexpected alternations of fortissimo and piano. After the recapitulation of A, a fortissimo version of B forms the coda.

III- Andante (G flat)
This is one of the most beautiful movements Schubert ever wrote. A long, serene melody slowly unfolds above a rippling figure in the middle of the texture. The mood clouds over twice; but the final bars are as peaceful as the opening.

IV- Allegretto (A flat)
Again in A-B-A form, but without any coda. The opening six-bar phrases are made up of a quiet two-bar cascade of semiquavers, its repetition, and an answering chordal cantabile. The whole group passes through various keys until an extension of the chordal passage brings a return of the semiquaver figure. During its development a delightfully unexpected counter-theme emerges in the tenor register, and the rest of A is devoted to these two elements treated both separately and together. Section B, the Trio, is in C sharp minor. A long-limbed treble melody is accompanied by repeated chords. It begins quietly, but eventually reaches a powerful climax before dissolving in a quiet flurry of semiquavers that leads back to the recapitulation of A.

Four Impromptus, D935
Schubert dated the autograph December 1827 and at first numbered the pieces 5-8 in continuation of the previous set. Later he re-numbered them 1-4.

I- Allegro moderato (F minor)
As in the first movement of D899 there are three subjects: A, B and C; but here they are unrelated thematically, and A is built from a group of themes rather than a single idea. B consists of a quiet six-bar chordal melody in A flat, which is repeated at first with the addition of the octave above, and then with a filigree semiquaver accompaniment in the highest reaches of the keyboard. This rounds off what is even closer to a sonata-form exposition than its equivalent in D899. But the sequel is altogether different: for a completely new subject, C, is now unfolded. It begins in A flat minor, modulates widely, and consists of short snatches of melody alternating between treble and bass, both played by the left hand while the right murmurs a semiquaver accompaniment. This long, self-contained section is followed by a more or less orthodox recapitulation of A and B. But then there is another surprise, for instead of a normal coda there is a complete repeat of C, now in the tonic. The movement then ends rather abruptly with a final short reference to the opening theme.

II- Allegretto (A flat)
This is not unlike a normal Minuet and Trio. Section A is warmly melodied; while B, the Trio in D flat, is wholly concerned with a wide-ranging right-hand triplet figure. The recapitulation of A is rounded off with a twofold echo of its final two bars.

III- Andante: Theme and five variations (B flat)
The lovely theme (so unaccountably scorned by Schumann) is very similar to both the slow movement of the String Quartet in A minor and one of the Entr'actes in the incidental music to Rosamunde. Its five variations, of which No 3 is in the minor and No 5 in G flat, are sharply contrasted in mood. But the movement ends quietly with a slow nine-bar coda that at first intensifies, then resolves, the harmonies of the opening.

IV- Allegro scherzando (F minor)
Though lively in mood and tempo, the structural processes of this movement are extremely leisurely. It is in A-B-A form writ large, in which both A and B contain their own contrasts and repetitions. But whereas A has four distinct elements and is mainly in F minor, B (which begins with quiet right-hand scale passages) has only two and is harmonically wide ranging. After the recapitulation of A there is a long coda that starts unexpectedly in D flat. Its material at first seems new; but it is in fact based on a quaver cross-rhythm from the middle of A (three accents in the place of two), which is now quietly repeated over and over again, above slow-moving chords in the bass. After a moment's pause the pace suddenly quickens, the normal rhythm bursts in fortissimo, and the movement ends with a breath-taking scale from top to bottom of the keyboard.