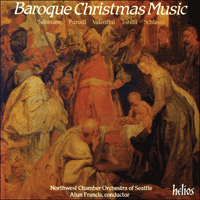 Shepherds are an indispensable part of our conception of the first Christmas night. It was to them that the Angel of the Lord appeared, bringing them the glad tidings of the birth of the Son of God. Consequently, the sound of shepherd pipes of one sort or another came to be imitated in the numerous Christmas night scenes without which, it seems, no baroque composer felt his output to be complete; and associated with rustic piping was the languid 6/8 or 12/8 metre suggestive of an idyllic pastoral scene. The greatest of all such musical pictures, albeit without specific religious connotation, is in 12/8: the ‘Scene by the Brook’ in Beethoven’s ‘Pastoral’ Symphony. The present recording offers some of the earlier and less frequently heard representations of that momentous night in Bethlehem.

Georg Philipp Telemann (1681–1767), the most prolific composer in the history of music, is said to have written 600 suites and overtures in response to the insatiable demand for French culture in Northern Germany during the early years of the eighteenth century. The French style is displayed strongly in the dotted opening sections of his ouvertures and also in the style and names (Rondeau, Sarabande, Gigue, etc) of the succeeding movements of most of them. Adolf Hoffmann’s thematic catalogue of Telemann’s orchestral suites (Möseler-Verlag, 1969) lists 137 surviving examples, many including wind instruments (some with concerto-like responsibility), but the majority—some 75—are for string band alone, and it is into this category that the Festliche Suite falls. It is scored simply for first and second violins and bass, to which, of course, a continuo harpsichord is added.

The grandly posturing ‘French’ Introduction enfolds a light dancing section in 3/8 metre that avoids the customary fugal writing to be found in the most typical fast sections of such movements. There follows an energetic Marche and Plainte whose nature seems more to provide contrast than to lament some great tragedy. The central section of the next movement, Gavotte, is entitled Gavotte Il en Musette, and it is here that Telemann suggests the French bagpipe, or musette: a sighing melody with piquant pauses, the whole over a drone bass. The instrument known as the musette was immensely popular during Louis XIV’s reign to depict rustic and pastoral scenes and, by association therefore, the watching shepherds of the Nativity. A Passepied and double (i.e. variation, in this instance for solo violin) follows, and the Festliche Suite closes with a Gigue in 6/4 time.

Precocious and enormously gifted, Henry Purcell (1659–1695) saw one of his own songs published when he was only eight years of age. At the time he was a chorister at the Chapel Royal. The rest of his short career also centred on London as organist at Westminster Abbey and the Chapel Royal, as keeper of the royal instruments, and as an active theatre composer, providing music (anything from a single song to the entire score) for some 50 stage works. He died at the age of 36 and was buried amid splendid ceremony in Westminster Abbey.

The two Christmas Interludes are extracted from the anthem Behold, I bring you glad tidings, written in 1687 for contralto, tenor, bass, chorus and small string orchestra. To our ears the Interludes are not noticeably in Yuletide style since the continental conventions of such pieces had not been adopted in the British Isles by Purcell’s time.

Born in Florence, Giuseppe VaIentini (1680–1759) moved to Rome while still in his teens and became a disciple, perhaps also a pupil, of Arcangelo Corelli. He made a comfortable living in the Italian capital as composer and violinist, and became known for his virtuosity and for the unconventional style of his violin compositions. Some of them, it is said, treated tonality in cavalier fashion, and he would require his soloist to ascend to uncommon heights. He also wrote operas and sacred music for Rome, but towards the end of his life he seems to have moved to Paris and changed from the Corellian to the more ‘modern’ homophonic style so popular there since the invasion of the Parisian audiences by music of the Mannheim School.

Valentini’s twelve symphonies for strings in three parts, Op 1, are from a wholly different era. They were published in Rome, Amsterdam and elsewhere in 1701 and are strongly Corellian in character. The last, as was the fashion, is designed for Christmas performance. It is built round two pastoral movements, the first of which occurs immediately after the slow introduction; the second (‘Largo’) between the two quick movements. The first of these faster movements is a virile and well-written ‘Allegro’; the finale (‘Presto’) displays rapid alternations between forte and piano and, towards the end of the second half, an unusually independent bass line.

While Valentini’s work of 1701 is an early example of the use of the word ‘symphony’, Giuseppe Torelli (1658–1709) was earlier still in that particular field, producing numerous and often imposing symphonies for use in the San Petronio Cathedral in Bologne well before the turn of the century. Furthermore, he was the first composer to write a concerto for solo violin and string orchestra (published at Augsburg, 1698), and his Concerti Grossi Op 8, which appeared in print shortly after his death, are the very first concertos for two solo violins. It is the sixth of these that contains the Christmas music.

A solemn ‘Grave’ sets the scene for the Pastorale, marked ‘Vivace’ and cast in 12/8 metre, the two solo violins carrying much of the melodic interest. A meditative Largo leads to another ‘Vivace’ which is a Gavotte en Musette in all but name, its held bass notes strongly suggesting the drone of the shepherds’ pipes.

Like Valentini and Torelli, Gaetano Maria Schiassi (1698–1754) was a violinist and concentrated upon that instrument in his relatively small output of instrumental music. Of his eleven operas and six oratorios, only one opera (Il Demofoonte, produced in Venice in 1735) survives. We are therefore left with a one-sided view of his work, particularly since the present Christmas Symphony is the only music by Schiassi to exist in a modern edition. Its quality suggests that his twelve violin concertos, twelve violin sonatas, and ten duets for violin, cello and continuo may well be worth the attention of scholars and publishers.

He was born in Bologna in the very year that Torelli wrote his first violin concerto, and worked there and in Darmstadt before moving to Lisbon in the mid-1730s, where he died in the service of he royal chapel. The date and place of composition of the Christmas Symphony are not known, but its style suggests that it was written before Schiassi left for Portugal.

The noble opening ‘Adagio’ is a fully-fledged movement rather than a mere introduction. It features suspensions and echo-like repetitions of whole phrases. This latter device is carried through into the ensuing ‘Allegro’, which opens with a tight four-part three-octave canon. The second idea once again introduces the musette imitation: a distinctly rustic ‘bagpipe’ theme over a drone bass, again utilising echo affects. The whole device is repeated in the rudimentary development section of the second half, and a recapitulation of the canonic opening theme closes the movement. The ‘Largo’ which follows suggests to us that Schiassi was familiar with Vivaldi’s music. It is a themeless creation of slowly changing chords which gives the keyboard continuo player the opportunity to indulge his fancy by arpeggiating the harmonic outline. It was a device used by Vivaldi in The Four Seasons and elsewhere.

Schiassi’s finale embodies the pure time-honoured Pastorale design in 12/8, complete with yet more echo effects and the obligatory drone bass. The remarkable ending, descending in dynamic from forte to piano and then to più piano, is a kind of written-out ritardando in which ever-lengthening note values rise higher and higher to a final ethereal D major chord. Could Schiassi perhaps have visualised the Angels of the Lord ascending again after imparting their joyful message?