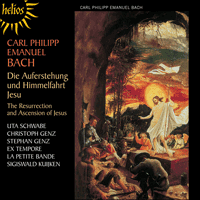 The death of Georg Philipp Telemann in 1767 paved the way for his godson, Carl Philipp Emanuel Bach to take up the position of Director of Music in Hamburg. Prior to that C P E Bach had been working for Frederick the Second of Prussia in Berlin but longed for a greater musical freedom and stylistic flexibility that working in Hamburg would offer him. This included the composition of three oratorios, including the one presented here.

C P E Bach worked on The Resurrection and Ascension of Jesus in collaboration with the librettist Karl Wilhelm Ramler from 1781, and in 1787 it was published by Breitkopf. A letter from the composer to his publisher subsequently revealed he considered it to be one of his greatest masterpieces—a reflection agreed upon by audiences at the time, and succeeding generations of composers, including Haydn and Beethoven who both drew inspiration from it.

‘Sigiswald Kuijken’s lively but sensitive and thoughtful direction, and his attention to details of the instrumental texture, ensure that the work gets the performance it merits. I found it compelling, and warmly recommend it’ (Gramophone)
‘Stephan Genz is outstanding … a touching and sometimes exciting piece that deserves to be heard for that thrilling chorus alone’ (BBC Music Magazine)
‘A superb performance’ (The Independent)
‘This excellent performance captures the listener’s full attention from the very first note’ (The Daily Telegraph)
‘Every listening experience should be an adventure, and CPE Bach and Hyperion do not disappoint’ (The Times)
‘Every listening experience should be an adventure, and C P E Bach and Hyperion do not disappoint’ (The Times)
‘Sigiswald Kuijken and his team … give a performance that shows both bite and sensitivity’ (The Irish Times)
‘This is an enormously rich and thoroughly rewarding realisation of a little known masterpiece … intimate, highly melodic and impeccably tasteful performance’ (HMV Choice)
‘Hyperion has a superb knack of picking repertoire that is not mainstream and recording it to disc with excellent soloists, orchestras and conductors. This is no exception … the trio of soloists give fine performances, as does the band with sympathetic accompaniments’ (Cathedral Music)
«Une merveilleuse réalisation qui prend valeur de référence» (Classica, France)

In the course of the eighteenth century the oratorio in German-speaking countries underwent several important changes which were highly representative of the way in which style and feeling were developing. When during the 1720s Johann Sebastian Bach supplied his faithful Leipzig public with two Passions—St John in 1723 and St Matthew in 1729—it seemed inconceivable that oratorios and Passions could be separated from places of worship. The oratorio was a sort of vast religious opera, and although it existed in several different forms, it always interpreted a religious text. References to the Protestant liturgy, such as in the chorales and biblical quotations, were fundamental to the genre; and since the Reformation begun by Martin Luther, the chorale had become a symbol of the Protestant community. Congregations that spontaneously sing melodies from the vast repertoire of chorales—either in unison or polyphonically (the complexity depending on the place and the moment)—have always identified with this rich melodic store.

At almost the same time, however, Telemann, the friend and rival of Bach, also set about composing oratorios. In Hamburg, where he was responsible for the music in five main churches and several secular musical institutions, he was obliged to compose a great quantity of works to satisfy the thirst for music in the Hanseatic town, which was the cultural beacon of the north. For more than forty years, from 1721 to 1767, he regularly provided his public with a succession of works: Passions, cantatas and oratorios. By 1728, when Mattheson retired from public life in Hamburg, the oratorio had virtually cut its connections with places of worship. A great number of Telemann’s oratorios were written for secular occa­sions, while fulfilling at the same time the function of religious music. These oratorios could really only be distinguished from the cantatas by their length and by certain dramatic aspects. From 1755, at any rate, Telemann was composing works of even greater magnitude, such as Die Donnerode, Das befreite Israel and Der Tag des Gerichts. And just as the oratorio was gradually becoming dissociated from its religious environment, there was also now a tendency not to base the oratorio on one single action but rather on a variety of feelings and moods.

Graun’s Der Tod Jesu, first performed on Ash Wednesday 1755 and recorded on Hyperion CDA67446, represents a turning-point in the evolution of the genre. Graun, who was Frederick the Second of Prussia’s director of music, introduced a new style that could be called ‘lyrical drama’ or ‘spiritual opera’, as Metastasio, the celebrated librettist, termed it. The work, based on a libretto by Karl Wilhelm Ramler, was an immediate success, and reflects the new trend of feeling that was becoming fashionable. As was the case in opera, com­posers now criticized the stiffness of the Baroque manner, and instead filled their works with simple and natural feeling. The composers of the younger generation accepted more and more these new criteria that were current in some areas as early as 1730 and prepared the ground in which the aesthetic theories of the Classical period would flourish.

Having worked for Frederick the Second of Prussia from 1738 to 1767, Carl Philipp Emanuel Bach, who could no longer cope with the king’s intellectually tyrannical musical tastes—typical of the enlightened despotism of the Enlightenment in which Frederick appeared as a model—decided to change posts. The death of his godfather, Telemann, opened up the way for him to become director of music in Hamburg where his style, too personal for the increasing narrow-mindedness of Berlin, would now blossom in its maturity. As well as countless works of secondary importance, often composed in haste or assembled from pieces by other composers, including his father, Carl Philipp Emanuel Bach left us three great oratorios: Die Israeliten in der Wüste, Die letzten Leiden des Erlösers, and Die Auferstehung und Himmelfahrt Jesu. The latter—to a libretto by Karl Wilhelm Ramler written in 1760 which had already been set to music by Telemann, Graun and others—was heard for the first time in a private performance on the Saturday before Easter in 1774. The first public performance of a revised version took place on 18 March 1778 in the ‘Auf dem Kamp’ concert hall. It seems, therefore, that the oratorio, which contains no chorale, was composed expressly for a responsive concert hall audience, and not for a place of prayer and its congregation. Bach, in collaboration with Ramler, con­tinued to modify the work right up to 1784. From 1781 to 1787 he discussed the publication of the work with Breitkopf, but finally abandoned the idea, which he considered not to be worth the investment. Finally, in 1787, following fresh negotiations, Breitkopf published the work which received three perfor­mances in February and March 1788 in Vienna (thanks to the encouragement of Baron Gottfried van Swieten), conducted by Mozart, who made several modifications to the work. A letter from the composer to his publisher reveals how proud he was of the piece which he considered to be one of his greatest masterpieces, from which younger composers could learn much.

Ramler’s libretto is not a dramatic narrative, but a lyrical description of the Resurrection and Ascension of Christ, high­lighting the feelings aroused by these events, without depicting actual personalities. Although the text is entirely a work of the imagination, it nevertheless contains several paraphrases from the Old and New Testaments. The work has twenty-two numbers and is divided into two parts of almost identical length. Although Bach’s musical language is as varied as possible, there are several recurring features. Each part opens with a short, dark orchestral introduction for strings; all the recitatives begin secco, with a description of a particular event, and continue, accompanied, with Christ’s own words—the only exceptions being No 3 Judäa zittert!, which is accom­panied throughout, and No 17 Elf auserwählte Jünger, which is secco from start to finish. There is one unusual chorus which appears three times to different words and is treated like a refrain; it is first heard as the fifth movement to the words ‘Triumph! Des Herrn Gesalbter sieget!’, and then returns in Nos 16 and 19, retaining each time its powerful and largely homophonic character. The arias and the single duet are charac­terized by a heightened expressivity—‘a composer cannot move unless he himself be moved’, as C P E Bach liked to say—and irregular structure that is often adapted to suit the text. It should also be men­tioned that the choruses which conclude each part are both of the ‘prelude and fugue’ type, even if the final chorus alternates with the first theme in a complex manner. True contrapuntal writing is therefore reserved for the end of each part, as an ultimate expression of divine power and majesty. The work ends with the words of Psalm 150: ‘Let everything that hath breath praise the Lord! Hallelujah!’.

Die Auferstehung und Himmelfahrt Jesu can be consi­dered to be one of the most significant oratorios composed between those of Johann Sebastian Bach and Haydn, who was himself inspired by C P E Bach’s example. The richness of the musical language and forms, the subtlety of the details and the dramatic depth of a work without a plot show us to what extent Carl Philipp Emanuel was a past master in the subtle art of organization, while seeming to write with the greatest freedom. The work is the perfect example of the aesthetic of ‘feeling’, of a modern and contrasting expressivity, less stereo­typed and also less obvious than compositions of the Baroque period. Die Auferstehung und Himmelfahrt Jesu left its mark on succeeding generations and justifiably aroused the admiration of, among others, both Haydn and Beethoven.