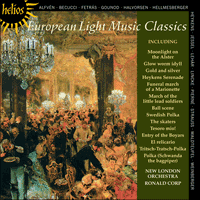 One of Ronald Corp and the New London Orchestra’s most beloved albums: fifteen gems of the light music repertoire from across Europe, with music by Alfvén, Fetrás, Halvorsen, Heykens, Hellmesberger, Jessel, Lehár, Lincke, Pierné, Waldteufel, Weinberger and others. As with the British programmes, the composers’ names may not be familiar but much of the music will be, especially to older listeners—‘Ah, so that’s what that’s called!’ they’ll say. The Gounod Funeral march, for example, will be familiar as the signature tune of Alfred Hitchcock.

‘The Waldteufel and Fetrás waltzes both come off splendidly, as do the other pieces in their varied styles. Hyperion deserve to have another success on their hands’ (Gramophone)
‘15 numbers that everyone can whistle but few can put a name to. Played with panache and affection, the imaginative Mr Corp has notched up another success’ (Classic FM)
‘Another tasty compilation that will sell like hot cakes’ (Classic CD)
‘With other goodies here and fine notes this reissue is still well worth revisiting’ (MusicWeb International)» More

As the cradle of classical music, the continent of Europe has always produced a fund of melodic pieces that have penetrated deep into the consciousness of people around the world. Some are the productions of composers celebrated more for larger-scale forms, while others originate from composers of more modest pretensions for whom a single world-wide success may rank as their sole remaining claim to fame.

Inevitably Vienna, for so long the musical centre of Europe, plays a prominent part in any representative selection. Indeed no collection of popular European music would be complete without something by the Strauss family of dance composers. Eldest of the three sons of the dynasty’s founder Johann I, the younger Johann Strauss (1825–1899) directed his own orchestra for a quarter of a century before retiring to concentrate on the composition of operettas. His Tritsch-Tratsch-Polka (‘Chit-Chat Polka’) dates from 1858 and is the earliest piece in this collection. It takes its name from a weekly Viennese satirical journal, and the chattering melodic line admirably conveys the impression of local people exchanging the latest gossip.

Joseph Hellmesberger (1828–1893) was a member of another celebrated Viennese family. His father Georg was the most popular Austrian violinist of his day and the first leader of the Vienna Philharmonic Orchestra. Joseph followed a similar path, founding the Hellmesberger Quartet and holding various eminent positions. He in turn had a son, Joseph junior, who became conductor of the Vienna Philharmonic Orchestra and a composer of ballets and operettas. The elder Joseph’s compositions were mostly for the violin or strings, as with Ball-Szene (‘Ball scene’). It is based on a violin study by the violinist Joseph Mayseder (1789–1863) and is scored for strings, harps (with optional woodwind), timpani and triangle. Its whirling main theme makes virtuoso demands on the violins and frames a more relaxed central section.

In operettas such as Die Fledermaus, the younger Johann Strauss became the prime exponent of the so-called ‘golden age’ of Viennese operetta. His counterpart in the ‘silver age’ was Franz Lehár (1870–1948), composer of Die lustige Witwe (‘The merry widow’, 1905). Though Lehár’s output was heavily weighted towards the theatre, he too began as the composer of independent dances and marches. Unlike Strauss he was Viennese only by adoption, having been born in the Danube town of Komáron, Hungary—today Komárno, Slovakia. It was after his move to Vienna as Bandmaster of the 26th Austro-Hungarian Infantry Regiment that he was commissioned to compose a waltz for a Gold und Silber (‘Gold and silver’) Carnival Ball in 1902. The result was the eponymous waltz, a richly melodic and brilliantly orchestrated work that gloriously captures the opulence of the occasion for which it was composed.

Elsewhere in the Austro-Hungarian Empire, the opulently scored folk-opera Švanda dudák (‘Schwanda the bagpiper’, 1927) by the Czech composer Jaromír Weinberger (1896–1967) earned the widest popular success of any Czech opera after Smetana’s The bartered bride. As with Smetana’s opera, that success was extended by the huge popularity of the folk dances extracted from the opera. Most particularly in the case of Weinberger’s opera, it was the Polka which Schwanda plays on his bagpipes at his entrance in the second scene of Act 1.

All three German composers represented in the programme were specialist light music composers. ‘Oscar Fetrás’ was the pen-name of the Hamburg conductor Otto Faster (1854–1931), who was such an ardent fan of the ‘Waltz King’ Johann Strauss that he not only composed in similar style but also built up an important collection of Strauss memorabilia and even modelled his appearance on his idol. This indebtedness is well displayed in his most successful waltz, Mondnacht auf der Alster (‘Moonlight on the Alster’), which dates from around 1890. Just as Strauss’s most celebrated waltz takes its name from Vienna’s principal waterway, the Danube, so too is Fetrás’s named after Hamburg’s—the tributary of the Elbe that at Hamburg forms two lakes, the Inner and Outer Alster.

Paul Lincke (1866–1946) was one of Germany’s finest melodists and the composer of many short pieces indelibly associated with the city of Berlin. He played and conducted in dance orchestras and theatres and was for two seasons musical director at the Folies-Bergère in Paris before establishing himself as conductor at Berlin’s Apollo Theatre. In 1899 he composed the first of a series of short operettas for the Apollo, which concentrated less on dramatic integration than on spectacle and individual display pieces. It was for one of these, Lysistrata (1902), a burlesque of the Aristophanes story, that Lincke produced the haunting Glühwürmchen-Idyll (‘Glow worm idyll’). For concert performance he added to the operetta’s song a contrasted central section, in which form the piece became a celebrated vehicle for the ballerina Anna Pavlova.

Leon Jessel (1871–1942) was born in Stettin in eastern Germany (now Szczecin in Poland) and became a theatre conductor and composer of operettas and short orchestral pieces. The latter included two that achieved international renown—Der Rose Hochzeitszug (‘The wedding procession of the rose’) and, above all, his Parade der Zinnsoldaten (‘Parade of the tin soldiers’). This admirably portrays its subject and was for many years after World War II familiar to children in Britain as the signature tune of the ‘Toytown’ series on BBC Radio’s ‘Children’s Hour’.

Jonny Heykens (1884–1945) was another light music specialist, born in the Dutch town of Groningen. A violin pupil of Eugène Ysaÿe at the Brussels Conservatory, he played in various orchestras before founding his own orchestra in Groningen in 1914. Among his many light music compositions, it was above all his Ständchen (‘Serenade’) which won wide international success between the Wars.

Moving into Scandinavia, we find in Johan Halvorsen (1864–1935) a distinguished Norwegian violinist, conductor and composer. His output included three symphonies and numerous Norwegian Dances and Rhapsodies, but he is best known for his Bojarenes inntogsmarsj (‘The entry of the Boyars’), published in 1895. The Boyars were members of the old Russian aristocracy, about whom Halvorsen read after being offered a position in Romania. He turned the job down, but was inspired to compose this brilliantly scored piece in which we hear the Boyars first approaching and then marching past.

Hugo Alfvén (1872–1960) was a Swedish composer whose output included five symphonies and much vocal and instrumental music. He composed several pieces that achieved popular international success, including the first of his three Swedish Rhapsodies. Another was the piece recorded here, which was originally entitled Roslagvår (‘Spring in Roslag’) or Roslagspolketta (‘Roslag Polka’) and gained international currency during the 1950s under the more approachable title Swedish Polka.

France’s rich musical tradition must inevitably feature in a programme such as this. Charles Gounod (1818–1893) can justifiably be regarded as the central figure in French music of the third quarter of the nineteenth century. His compositions included symphonies, songs and religious works, though he is best known for operas such as Faust. The charming Marche funèbre d’une marionnette (‘Funeral march of a marionette’) was first published as a piano piece in 1872, and its popularity was such that Gounod provided an orchestral version six years later.

Émile Waldteufel (1837–1915) owes his German surname to his Strasbourg origins, but he lived virtually his whole life in Paris, where he became conductor of the balls of the Second Empire and Third Republic. He was the most widely successful waltz composer after Johann Strauss, his masterpiece being Les patineurs (‘The skaters’, 1882). In it one readily detects the skaters testing the ice, gliding around, and trying some daring leaps. Sleigh-bells enhance the wintry scene.

Gabriel Pierné (1863–1937) was likewise born in eastern France (in Metz) and moved to Paris as a boy. A pupil of Massenet and César Franck, he succeeded the latter as organist at the church of Ste-Clotilde in Paris. He composed much music for the theatre, as well as orchestral, chamber and instrumental music, but is most widely known for the delicately scored Marche des petits soldats de plomb (‘March of the little lead soldiers’) from his Album pour mes petits amis, published in 1887. With its Gallic refinement, it makes an interesting contrast with Jessel’s more Germanic and regimented toy soldiers.

In the sunny south of Europe we meet Ernesto Becucci (1845–1905), who was born at Radicondoli in Tuscany and studied in Florence, where he also died. A successful teacher, his compositions were mostly in lighter style, among which several enjoyed considerable local success. It was above all the waltz Tesoro mio! (‘My treasure!’), dating from the 1890s, that gained him international acclaim, enjoying renewed popularity in Britain around 1950 when it was fitted with English words as ‘Waltzing the Hours Away’.

A Latin touch is provided in this programme by José Padilla (1889–1960), an enormously gifted melodist who was born in Almería, Spain. During the 1920s he composed the songs Valencia and Ça, c’est Paris! for Mistinguett to sing at the Moulin Rouge in Paris, but acclaim in his native Spain and in South America had come with the lovely Princesita and La Violetera and the rousing El relicario (‘The locket’, 1918). This last was popularized by the Spanish singer Raquel Meller, but is most familiar internationally as an orchestral piece.