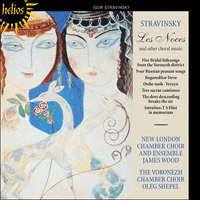 Stravinsky’s popular, extroverted choral work Les Noces—the epitome of his ‘Russian’ style—is placed in context in this marvellous recording where James Wood’s New London Chamber Choir are joined by the Voronezh Chamber Choir who bring an authentic Russian sound to the ensemble. They also perform Russian folksongs and the Slavonic versions of Stravinsky’s Ave Maria, Credo and Pater Noster. Other aspects of Stravinsky’s compositional style are represented by the austere TS Eliot setting The dove descending and the memorial to TS Eliot himself.

‘In the most immediate way, this disc provides scholarly context for one of Stravinsky’s most adventurous works. A splendidly invigorating account of his Russian wedding cantata, Les Noces, is preceded by the raw authenticity of Five Bridal Folksongs from the Voronezh District, given by the Voronezh Chamber Choir under Oleg Shepel. The segue into Stravinsky’s subtly transformed art-music, with its extraordinary bell-like accompaniment of percussion and four pianos, makes clear what he was all about. (This is the choral equivalent of The Rite of Spring.)’ (The Sunday Times)
‘As magical a musical experience as this imposing score has ever afforded on record. A fascinating programme, prepared and sung to the highest imaginable standards’ (Fanfare, USA)

The manners of a traditional Russian wedding have, over the centuries, been fused into stylized, celebratory spec­tacles in the form of folk song and dance. Each element of the ritual is equally important—the courtship, the bride’s celebration, the party on the eve of the wedding, the purchase of the bride, the marriage, the wedding procession, the donning of the bride’s headgear, the plaiting and unplaiting of her hair, and finally the wedding feast. The traditions and intricate codes of social behaviour at weddings are clearly preserved in the Five Bridal folksongs from the Voronezh district as well as being sublimated in the folk-like fragments which make up Stravinsky’s Svadebka.

These bridal songs were collected by Galina Tkachova in villages near Voronezh and have not been arranged, but rather transcribed without being re-worked or especially edited. They are not directly related to the melodic and rhythmic building blocks of Svadebka, but are brilliant examples of the type of folk material which Stravinsky instinctively drew upon. We can certainly see clear parallels in Svadebka in the bridal songs’ motivic repetition, imagery and the appearance of creatures to symbolize states of being, human qualities and emotions. What we miss in a sound recording, however, is the visual element of movement and dance without which these songs are only partly expressive. A live performance of these songs neces­sarily involves the theatrical; the performers use spontaneous as well as symbolic gestures which are an essential part of the ritual.

Now, little grey duck is performed on ‘Svodushka’, the day when the girls of the village go walking as soon as the match­maker has entered the future bride’s house. The maiden does not yet know who her future husband is to be, but although fearful, she is encouraged by her friends to go home and pay her respects to her betrothed.

Good day, my fair, my nice one is a greeting in song offered by the joyful groom to his new bride: he describes her as a flawless picture of beauty. The darkness of the bride’s eye­brows are one of her most praised attributes; a direct ‘echo’ of this image occurs in the last scene of Svadebka in the men’s shouted ‘Nastya chernobrovaya!’.

Oh, mother, my little head hurts is the song of a bride-to-be who is unusually fortunate to be engaged to a man she loves. The song’s bubbly, dancing character betrays the girl’s impatience, which is improper for her to show, but impossible to conceal.

Now, thou little pine tree depicts the emotional climax before the wedding ritual for the bride—the moment when the girl’s braided hair is unwound and then bound at home before her marriage. Each of the women present at the ceremony (men are not admitted) offers her own emotional response to the short-lived freedom of girlhood. Her mother is dismayed to have to give her carefree daughter away to a stranger; her friends are sad to lose their companion, the older women reflect on their own youth. The bride cries most of all and, joining in the lament, she takes leave of her mother and relations, asking for consolation for what lies ahead.

In my ample chamber represents the glorification of the young couple. Of all the beautiful symbols found in the poetry of Russian bridal songs, the favourites are the similes com­paring the bride to a duck, a swan, a birch tree; emblems of beauty, wholesomeness and purity in Russian folklore, these images emerge similarly in Svadebka.

Stravinsky wrote of Les Noces: ‘I became aware of an idea for a choral work on the subject of a Russian peasant wedding early in 1912; the title Svadebka (‘Les Noces’) occurred to me almost at the same time as the idea itself.’

This idea of the wedding as a choral work did not take final shape until 1923, over ten years later. In the meantime the piece went through many sea-changes of colour which present some intriguing combinations of instrumentation, involving mechanical and folk-based sonorities. The long gestation period had much to do with the War, but also other com­missions such as Renard and Le Chant du rossignol were offered to Stravinsky. One of the first versions of the score emerged in 1917 in which the vocal parts were enveloped by a lush sonority of a large orchestra plus solo strings and cimbalom. Stravinsky had apparently earlier toyed with the idea of a much more ‘peasant’ sounding ensemble with bala­laikas and guitars for a more representational display of the text. The stripping away of realistic detail in favour of a more radical and austere sound took Stravinsky in the opposite direction in 1919, towards a largely mechanistic, experimental sound involving pianola, harmonium, two cimbaloms and percussion. The next version—an improbable and, from a conductor’s point of view, fiendish combination of four pianolas with harmonium and percussion—was explored and abandoned. Finally, the evolution from representational through mechanistic to a synthesis of the stylized combined with a metamorphosis of folk elements emerged in the form which is heard in this recording. Scored for four pianos and percussion, it is with these forces that the orchestral medium is most powerfully suggested without sacrificing the pungency of percussive impact.

Dramatically, the spectacle and vocal representation of a wedding is similarly stylized. The vocal lines are not represen­tational; for example the soloists do not take on exclusive individual roles of bride, groom, parents etc, but rather adopt different roles, giving us an insight into the expressions and reactions of individual characters without developing them as personalities. The original choreography for the work at the Théâtre de la Gaîté‚ in June 1923 reinforced Stravinsky’s ideas of ‘the ritualistic and non-personal. The choreography was expressed in blocks and masses; individual personalities did not, could not, emerge.’

Though Stravinsky structures the first two scenes of Svadebka by separating the male and female wedding pre­parations, these formal frames are widened later as the rituals of the wedding become more complex, and the last scene takes on a potentially anarchic but compositionally tightly controlled form. Here the sound picture is a collage of streams of thought, strands of conversations, party noises—sounds which are almost representational in their depiction of energy, celebration, drunkenness, sexual suggestiveness combined with the evocation of pagan fertility gods alongside references to the Virgin and saints. Pagan play-acting is a strong tradition, seen here in both the collection of bridal songs and Svadebka, but perhaps the most important element underlying Svadebka, the idea of ritual and sacrifice, is most characteristically expressed by Stravinsky’s compositional technique of cellular, motivic repetition made unpredictable by using irregular stresses. However, Stravinsky is never merely descriptive. The collection of clichés which are typicalIy trotted out at weddings might be ‘compared to one of those scenes in Ulysses in which the reader seems to be overhearing scraps of conversation without the connecting thread of discourse. But Svadebka might also be compared to Ulysses in the larger sense that both works are trying to “present” rather than to “describe”.’

The textual sources for Svadebka were anthologies which Stravinsky described as ‘treasures of the Russian language and spirit’. The appearance of creatures in the text is both typical of traditional folk characters and symbolic of the bridal situation. ‘Swans and geese both fly and swim and, therefore, they have fantastic stories to tell about the skies and the waters, stories that are mirrors of peasant superstitions. I am referring to the soprano’s lines beginning “I flew up high one day and saw the sea …”, but “swan” and “goose” also refer to the bride and groom. They are popular terms of endearment like “my little dove” or “my little goose”.’

Svadebka contains the same aspects of innocence and cruelty which are essential to The Rite of Spring except for the Rite’s final element of death-sacrifice. In Svadebka it is given a ‘civilized’ form in the marriage bed scene and sublimated in the form of celebration—or lament depending on the viewpoint—in the tolling of the bells at the very end of the piece. The binding of the bride’s tresses with red and blue ribbons was a religio-sexual custom, as was the tying of the tresses around her head to signify the married state. The lamentation of the first scene can also be taken on different levels: the girl genuinely weeps for loss of innocence and for the pain of her pulled hair, but also because it is the bride’s custom and duty to weep.

The Four Russian peasant songs (composed during the gestation period of Svadebka between 1914 and 1917) display in microcosm Stravinsky’s adoption of the folk idiom while transforming it into something unmistakably his own. His fingerprints are even clearer in his later arrangement of 1954 where he adds four horns. The only vocal differences in the two versions are occasional re-barring, a few minor changes of word-stress, plus one song’s straight transposition, but the effect places what was close to authentic folk music firmly into the context of twentieth-century sonorities and language. According to Simon Karlinsky, Stravinsky’s mistranslation of the title Podblyudnye as ‘saucers’ has for a long time given a false association to the activity with which the songs are connected. They are now thought to have been sung during the method of fortune-telling by pulling small possessions from a covered dish of water. ‘Ovsen’, the second song is also now thought to have more to do with the name of the first day of spring in the pre-Christian Russian calendar than any mythological figure.

The Credo and Pater noster were composed as liturgical pieces for the Orthodox Church, though he later rewrote them with Latin texts. The Credo was re-worked in 1964 and the word-rhythms were notated. The Ave Maria was intended by Stravinsky to be a concert piece. These three pieces are exquisite studies in simplicity and economy of style, while his own inimitable harmonic fingerprint is preserved.

The so-called ‘completions’ of Gesualdo’s Tres sacrae cantiones also betray Stravinsky’s unmistakable harmonic style to such an extent that they are not mere arrangements or canonic completions but recompositions which become a hybrid with characteristics of both composers.

The Anthem The dove descending and Introitus, however, are real children of his later period. The one setting T S Eliot’s text (in 1962) and the other a memorial homage to Eliot (1965), they both reveal Stravinsky’s gift of textural clarity while remaining true to the serial language in which the pieces were written.