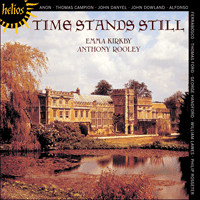 In the lute songs of John Dowland and his contemporaries, we have a marriage of words and music of equal brilliance. Emma Kirkby is acknowledged worldwide as the greatest modern performer of this repertoire, her crystal-clear tones expressing every shifting nuance. This album of lute songs on the theme of mutability is a fascinating recital, containing some of the masterpieces of the period. She is accompanied by her long-time collaborator Anthony Rooley. In the booklet note, Kirkby discourses learnedly on the works and puts them in their historical context.

‘A fine recital that adds a few welcome items to the recorded repertory of the lute song, engineered close to perfection’ (Gramophone)
‘At the time I thought it the best lute song recital ever, and there are few even now that can match this for quality, on every level (and they're nearly all by Emma, anyway)’ (Early Music Review)

What man that sees the ever-whirling wheele
Of Change, the which all mortal things doth sway.
But that thereby doth find and plainly feele
How MUTABILITY in them doth play
Her cruell sports, to many men’s decay?

Shepherd: The winged hours fly fast when we embrace;
But when we want their help to meet
They move with leaden feet.
Nymph: Then let us pinion Time, and chase
The day for ever from this place.

Two descriptions, one high-flown, the other quite mundane, of the human condition! We can respond to the sentiments today, even though we have lost touch with the culture that expressed them. A popular Renaissance wood-cut shows Time leading Man through the three ages of his brief life. The notion was that above the Moon, in the heavenly spheres, Time had no power, whereas all beneath the Moon—the world, the four elements, Man, all creatures and plants—were subject to change and decay. Campion’s song Come, cheerful day puts it bleakly: ‘So every day we live a day we die’.

How should Man respond to this predicament? He could follow the course suggested by the classical poets Anacreon, Catullus and Horace (all enjoyed in seventeenth-century England) and concentrate on seeking out the good things of life, short-lived delights that should be seized while they were there. In What then is love but mourning? Campion uses this thought as a means of seduction (‘Come away, my darling’) made all the more beguiling by Rosseter’s cheerful setting. Ronsard’s Mignonne allons is more devious, dwelling with delectable melancholy on the mortality of a lovely rose and leaving the lover’s invitation to the end, thinly disguised as a piece of philosophy. Most forthright of all is the Herrick/William Lawes version, Gather your rosebuds while you may; that this was far and away the most popular of Lawes’s songs perhaps tells us a little about the atmosphere in England in the years before the Civil War.

Naturally this approach did not guarantee success, and lyric poetry is full of accounts of Time’s unfairness. One of the most sophisticated of these is It was a time when silly bees could speak. In this, known in some sources as ’The Earl of Essex his buzz’, the queen’s former favourite complains with much clever wordplay about his rivals, the ‘time-servers’ at court, the ‘lazy drones’ who get more favour from Time than honest ‘thyme-feeding’ workers like him. If only he had known, as we do, that the bee-hive is ruled not by a king but by a queen, he would have enjoyed his metaphor even more. Essex’s claim that he is ‘cast down when atomies do climb’ might have recalled for his readers the popular image of Fortune’s wheel, which she turns inexorably, throwing off the ambitious as surely as she has raised them.

The lover also reguarly complains about Time and change: Go, passions, to the cruel fair claims whole ‘annals’ could be written of the faithful lover’s endurance, rewarded only with change in the beloved: a fairly common sentiment made uniquely poignant by Ford’s exquisite setting which uses long-drawn chromatic lines for the lover’s time and sad syncopations for her despair. Now each creature joys the other follows another familiar pattern, painting the joys of spring when every living thing turns to love—except for the singer, alone and melancholy.

It was of course accepted by all thinking men that the ‘worldly’ approach was ultimately self-defeating. One suspects that proponents of it in poetry were writing with a certain irony, expecting the wise man, aware of the transitory and relative nature of material things, to enjoy them with one eye fixed on the hereafter. Gather your rosebuds is addressed to the young man who in maturity would adjust his perspectives. Henry Lea’s poems His golden locks and Far from triumphing court celebrate his retirement as a time of prayer and contemplation. This was the proper role of old age, an honourable estate celebrated, rather more tongue-in-cheek, in Campion’s galliard-song Though you are young and I am old. Published in 1601, this might have been a sideways tribute to the ageing queen, though it is doubtful that she would have appreciated it. The galliard form is cleverly exploited, the voice singing in steady long notes to express old age, while the lute’s frisky divisions suggest the bubbling of youth. Danyel seems to be doing something similar with his galliard He whose desires, the text of which sums up the contemplative approach: ‘Rest alone with thyself, be all within; For what without thou gett’st, thou dost not win.’

This more spiritual perspective was not exclusively Christian. In the ferment of ideas developing in Europe at this time Platonism and Hermeticism had their place, the latter characterized by a constructive despair of the world, which was seen as a trap to be shunned by the wise man intent on regaining his rightful place in heaven. There are hints of this in Dowland’s Flow not so fast, ye fountains: ‘Time can abate the terror Of every common pain; But common grief is error. True grief will still remain.’ This grief, which can take one beyond Time, is clearly not to be confused with petty, individual depression, which in any case would scarcely emerge from Dowland’s exquisite setting.

Platonism had an especial attraction for artists. Dependent as they were on earthly patrons, they could hardly turn away from material beauty, but the Platonic theory of the Ideal, of which any earthly beauty is but a pale reflection, offered a direction for their endeavours and could explain why great art seemed to escape the ravages of Time. ‘I have built a monument more enduring than brass’, boasted the Roman poet Horace, whose works were still read, translated and even set to music in seventeenth-century England. Samuel Danyel in Time, cruel Time muses on a lady’s face so lovely that it seems immune to Time, but concludes that even she will be ‘beguiled’ at last. He has given her a measure of immortality, however, in his poem which still delights us today, and his brother John’s setting, with his characteristic blend of rhythmic freedom and melodic refinement, gives a further dimension to our experience, achieving a kind of suspended grandeur which arrests the listener, and so fulfils the role required of Art, that it should be a defence for Beauty against the ravages of Time.

With this in mind, we can begin to consider the title song and masterpiece of our anthology, Time stands still. Here we are invited to be still, with Time, and contemplate the figure who has stopped him in his tracks—an eternal figure, dazzling even to Cupid, who has Fortune helpless at her feet. Who is this person? The publication date of the song (1603) and the protestations in the second stanza suggest a tribute to the Virgin Queen Elizabeth who died in that year: indeed it is tempting to assign the poem to her devoted servant Henry Lea. But beyond this simple identification one can also look for others among the personifications so beloved by the Elizabethans—the lady Philosophy, for example, who in Contemplation offered man his highest activity and best link with the Eternal. Or perhaps the answer lies even beyond Philosophy, and one could see in Dowland’s song a version of the picture found in the Flemish emblem books, of Time transfixed by the dazzling face of his own daughter, Truth.

His golden locks Time hath to silver turned was sung by one Robert Hales as part of Henry Lea’s presentation to the Queen when he retired as Queen’s Champion at the Accession Day tilts of 1590. For this he had a special suit of armour made all in white (for Old Age) and emblazoned with the sun in gold on his right shoulder (for the active life he was leaving) and the moon in silver on his left (for the passive contemplative role he now requested). It was said that the Queen was so delighted with his presentation that she demanded that he do it again for her the following year! He finally withdrew to his fine mansion near Woodstock where he remained for a further twenty years, outliving Elizabeth and extending his courtly allegiance to the new queen, Anne. Far from triumphing court, written by Lea in his extreme old age, and after the death of Queen Elizabeth (verse 1), celebrates a visit made to him in 1608 at Woodstock by the new king and queen, James and Anne, making a courtesy call on this most venerable survivor of the previous regime. Queen Anne gave him two presents, referred to in verse 2—a jewel to wear in his hat and a miniature of herself which he undertakes to carry on his heart. Dowland’s setting was published in 1610, the year of Lea’s death, perhaps as a final tribute to the courtier poet.