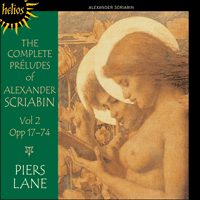 Piers Lane's performances of the complete Scriabin Préludes are bold and compelling, matching technical bravura with a rich vein of poetry and colour and communicating the composer's vivid and exceptional imagination. Beautifully recorded and superbly annotated by Simon Nicholls, this set is a must for all lovers of Scriabin and the piano. The Préludes of Opp 2-16 are available on CDH55450.

The musical ambitions of Alexander Scriabin (1872–1915) leaned towards the gigantic: five symphonic works, an opera project and the millennial Mysterium bear witness to this. But by natural inclination he was a miniaturist, writing throughout his career many pieces ‘short as a sparrow’s beak or a bear’s tail’, as one commentator caustically put it. These evocations, sometimes a page or less in length, can be seen as forerunners of the ‘fleeting visions’ of a Prokofiev and as descendants of the equally compact Préludes of Chopin. The first of Scriabin’s Préludes dates from 1889; the bleak final set was composed after both of Debussy’s cycles, in 1914, shortly before Scriabin’s sudden death from septicaemia. Like a musical Fabergé, Scriabin is capable of creating a glittering world in a tiny space; the exquisite writing reflects the composer’s own subtle pianism, which he liked to describe as ‘crystalline’ and ‘perfumed’, but moods of disturbance, energy, even violence recur throughout the long curve of stylistic development traced by these short pieces.

The idea of a prelude as an improvisatory curtain-raiser to a performance goes back to the beginning of the history of keyboard instruments, and improvisation was still regarded as an essential skill for a concert artist in the nineteenth century. Just ten years before the Chopin Préludes were published, Carl Czerny remarked in his Systematic Introduction to Improvisation (Op 200!) that ‘it is one of the pianist’s adornments … to prepare the listeners and put them into the right frame of mind by a suitable prelude’. The importance of mood in these short improvisations led naturally to the prelude’s independent existence, most famously in Chopin, Rachmaninov and Debussy. In Safe Conduct, Boris Pasternak recounts Scriabin’s warning against ‘the harm of improvising’, but improvisation was clearly instinctive for Scriabin and an essential element in composing. Many sets of short pieces were sent off to publishers by Scriabin when cash was short: Belayev exhorted the youthful composer to systematize this spontaneous production, with the twenty-four Préludes of Op 11 as the result.

Op 17 is not often performed as a set, but contains some of Scriabin’s loveliest pages. No 1 is a melancholy waltz whose ‘flying’ right-hand line, supported by restless left-hand cross-rhythms, reaches passionate heights. It is the left hand (as so often) of No 2 which provides the motive power, with octave figures across the beat; above floats a magisterial line particularly reminiscent of Chopin. No 3 is in Scriabin’s weightless, filigree manner, and No 4 spins a melodic line over an evenly moving bass similarly to Op 11 No 13, which is in a related key. The scenery of Heidelberg evokes an heroic response in No 5: widespread broken chords in the right hand complement a left hand whose opening gesture anticipates Rachmaninov’s Sonata No 2 of 1913. The ‘doloroso’ marking of No 6 is expressed by ceaseless suspensions, but there is an underlying serenity. These sets often close with a lightweight number, but No 7 is an exception with its long, mobile lines and virtuosic left hand.

1897, the year of Scriabin’s marriage and of work on the Third Sonata, brought four more Préludes, Op 22. The chromaticism of No 2 is remarkable and No 3 could be marked ‘à la mazur’, with a characteristic rhythmic catch in its melodic figures.

In 1900 Scriabin was working on his First Symphony; the two Préludes Op 27 date from this time, showing complementary moods of heroic assertion and luxuriant abandon similar to the popular Poèmes of Op 32. An increased harmonic richness is already noticeable, and this is taken a step further with no fewer than nineteen Préludes in 1903—a year when Scriabin abandoned teaching and worked on piano music which was to include the Études of Op 42 and the Fourth Sonata, and on the Third Symphony (the ‘Divine poem’). The four faces of Op 31 reveal characteristic Scriabin moods: Wagnerian opulence in No 1, imperious gestures and rhythms in the ‘Con stravaganza’ of No 2, a shadowy chase ending in tragedy in No 3, and a strong flavour of harmonic experimentation in the brief No 4.

Op 33 starts with a limpid E major and a dreamy F sharp major (a key central to Scriabin’s consciousness), but the mood is shattered by an alarming outburst of anger in No 3 (‘Con collera’), and Scriabin’s burgeoning ego shows itself further in the ‘daring, warlike’ No 4. Scriabin did not live long enough to reassess the idealistic illusions besetting that era; musically, the Prélude’s impetus is increased by its 5/4 time signature, a feature shared with Op 11 Nos 14 and 16.

The three Préludes of Op 35 come the closest to the manner of Scriabin’s middle set of Études, Op 42, particularly the swirling figures of No 1. Self-assertion, the ‘I am’ which opens the ‘Divine poem’, is the ruling passion of No 2, but a rare and welcome touch of humour is brought by the experimental harmonic shifts of No 3. Op 37 opens with troubled soliloquy, but No 2 with its massive chordal writing is Scriabin at his most self-assured. Here, in the sixth bar, as Gottfried Eberle has pointed out, the ‘mystic chord’ is heard for the first time—that sonority which is unveiled fully in the Fifth Sonata—although it appears here conventionally spaced in thirds. No 3, a peaceful interlude, gives a respite before the wrathful gestures of No 4. The leaping octaves and tumultuous arpeggios here point directly to the late style.

The four Préludes of Op 39 open with a strong harmonic flavour of the ‘Divine poem’, but there is a suspicion here that Scriabin is applying his harmonic innovations to a familiar musical content. Not so with the startling twists, turns and mood shifts of No 2, truly improvisatory in manner. The mysterious languor of No 3 rests partly on Scriabin’s favourite three-against-five cross-rhythm. In No 4 the harmonic progression is enigmatic, elliptical, labyrinthine, like a sentence in very late Henry James.

Op 45 No 3 concludes a little trilogy along with an Album leaf and a Poème fantasque—as literary and philosophical ideas grew in importance, the poème became a favoured form. This short opus accompanies a crisis point in Scriabin’s life: living in Geneva, preaching an ‘artistic and political gospel’, in 1904 he left his wife for the twenty-year-old Tatiana Schloezer. The fantastical upward arpeggios at the end of each phrase here symbolize Scriabin’s flight (in both senses) into experimental, speculative realms.

The four Préludes Op 48 (1905) were written about the time that work began on the Poem of ecstasy, and the harmonic language has advanced considerably—so much so that the tonal endings come as something of a surprise. The marking at the head of each prelude is colourfully suggestive: ‘Impetuously, haughtily; poetically, with delight; capriciously, breathlessly; festively’. The snatched, hopping basses and impulsive rhythms and harmonic shifts of No 1 will become familiar in the later music. ‘Con delizio’, the marking of No 2, was to be associated with the unveiling of the ‘mystic chord’ in the Fifth Sonata of 1907: here, as there, the mood is rapt and transcendent. The downward twisting chromaticisms of No 3 contribute to its atmosphere of ‘breathless caprice’ and to a strange, Mephistophelian mocking character to be found elsewhere: in the ‘Énigme’ Op 52 No 2, ‘Ironies’ Op 56 No 2 or the ‘Poème’ Op 69 No 2. No 4 reveals a Nietzschean mood of self-assertion at its most blatant.

The following four Préludes were all written as part of cycles of short pieces. Op 49 No 2, from the same year, is another outburst of ill-temper, emphasized by hammered rhythms. Op 51 No 2 (1906), one of the most overtly Russian of all Scriabin’s works, obsessively repeats the same lugubrious phrases and harmonies; as it descends into silence one senses the endless hostile expanses of the steppes, waiting. Op 56 No 1 (1907/8) dates from the same time as the Poem of ecstasy. Its virtuosic octave and chordal writing combines aggression and aspiration, and though nominally in E flat major it seems to be written in A flat with a cadence onto the dominant—a step away from the traditional tonal ending. Op 59 No 2 (1910) takes us decisively into the late period, the time of Prometheus and the return to Moscow. This is a terrifying vision of approaching war and destruction, built exclusively on the hopping basses of Op 48 No 1 and as insanely monothematic as the ideologies that brought (and bring) those wars. Here, for the first time in the Préludes, there is no key signature and the final cadence ends with a discord (the Fifth Sonata and ‘Désir’, Op 57 No 1, had already ended away from the tonic, and the key signature was dispensed with in the Album leaf Op 58).

The two Préludes Op 67 (1912–13) come from the time of the last sonatas and with their rarefied dynamic level provide a welcome contrast. The first circles mysteriously around the same few enigmatic harmonies; the second, with its rapid, velvety, chromatic left hand, led the early biographer A E Hull to write in 1916 of a vision of ‘hundreds of multi-coloured night moths fluttering about in the semi-darkness’.

With the five Préludes of Op 74 (1914) we come to the last completed works of Scriabin before his sudden and unexpected death from blood-poisoning. At this period all his music was pointing towards the Mysterium project mentioned at the beginning of these notes, and in a public letter he welcomed the onset of war with naive idealism. But on Scriabin’s visit to London the previous year the practically minded Henry Wood observed that ‘he looked far from well and seemed to be a mass of nerves’. The unconscious mind, the wellspring of creation, is often wiser than the conscious, and these pieces impress us, not as millennial visions but as scarifying documents of individual and social catastrophe; not as tending towards some vast Gesamtkunstwerk but as returning to the improvisatory personal ‘miniature’ framework which had accompanied Scriabin throughout his career. This is, of course, an unprovable personal reaction, and Scriabin said of these last pieces that, as a crystal reflects many lights and colours, they could be played to express differing concepts.

The marking of No 1 can be translated as ‘painful, heartrending’; repeatedly it returns to the same wrenching dissonance as if obsessively seeking out a source of pain or grief. Of No 2 (where the bass never leaves Scriabin’s tonal centre of F sharp) the composer said, ‘Here is fatigue, exhaustion … all eternity, millions of years …’. The vague tumult of No 3 rises to a ‘cry’ (Scriabin’s marking), like a shout in the night. The harmonic language is close to that of ‘Flammes sombres’ (‘Dark flames’), Op 73 No 2. No 4 has the effect of a parenthesis: its styles of strict four-part harmony and meandering ‘undecided’ harmony are unique in a composer who wrote so pianistically and always, as he said, ‘according to principle’. Does this signal what could have been a new point of departure for Scriabin? Unique, too, is the simultaneous major and minor third in the final harmony. Phrases from Wells and Shaw come to mind: ‘Mind at the end of its tether’, ‘As far as thought can reach’. No 5 connects with the end of No 3 and with the bellicose vein noted previously. The elements of two-note bass figures and tumultuous up-and-down arpeggiations are familiar from Op 59 No 2, but the harmonic language and thematic development are taken incalculably further; and, as A E Hull pointed out long ago, the final great descent seems to end Scriabin’s output, intended to be so affirmative, with a tremendous question.