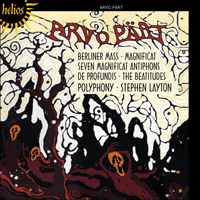 Here is some of the most spiritually uplifting music of our generation, sung by that most virtuosic of choirs, Polyphony. Arvo Pärt (paralleled in England by John Tavener) has succeeded in capturing the attention of a broad public through his consummate ability to weave a sense of inevitable power into music of fundamental simplicity.

The impressive Berlin Mass which opens the disc was written in 1990, the Credo being a fascinating major-key reworking of the earlier minor-mode Summa; very much an expression of joy at the lifting of the Soviet embargo on ‘sacred’ music in Estonia. Annum per Annum is a monumental work for solo organ and is here performed on the organ of St Paul’s Cathedral: a thoroughly exhilarating experience. The disc ends with the masterpiece De profundis. This most powerful of texts draws from Pärt an inexorable momentum from a beginning almost out of nothing to a devastating climax.

Tintinnabulation is an area I sometimes wander into when I am searching for answers—in my life, my music, my work. In my dark hours, I have the certain feeling that everything outside this one thing has no meaning … Here I am alone with silence. I have discovered that it is enough when a single note is beautifully played. This one note, or a moment of silence comforts me. I work with very few elements—with one voice, with two voices. I build with the most primitive materials—with the triad, with one specific tonality. The three notes of a triad are like bells. (Arvo Pärt)

With the extraordinary diversity of musical styles created this century, a labelling system has necessarily evolved to keep track of them all—from neo-classical, post-modern, serial and the ‘new complexity’, to more idiosyncratic, less objective classifications such as the ‘English Cowpat School’ and ‘squeaky gate’. On the great musical supermarket shelf Arvo Pärt is broadly known as a ‘mystic minimalist’. This may be a crass description, as all neat pigeon-holes tend inevitably to be, but it is as good a starting point as any for describing Pärt’s output in the 1980s and 90s.

The austerity and disarming simplicity of Pärt’s tintinnabulist works have led to a common criticism that this music is naive and washed-out: ‘It’s all the same, just a sea of A minor triads and precious silence’, one hears; or, as The New Yorker recently wrote, ‘Aural pillows that you can sink into’ (ie, not far removed from that amoebic sludge in sound’s evolution which is Elevator Music). Through careful selection of Pärt’s choral output, avoiding the more static, etiolated works, and through robust performances of wide emotional range, it is hoped that such unflattering preconceptions will be adjusted by this recording to reveal a truly impassioned, dramatic aspect to the composer’s musical personality.

What could be more impassioned and dramatic in late-twentieth-century music than the centrally placed ‘O Schlüssel Davids’ in the Seven Magnificat Antiphons, with its ecstatically pleading multiple layers of closely packed harmony? Or the fortissimo exclamation of the seventh antiphon—‘O Emmanuel, our king and teacher’—where repeated blocks of A major are transfigured by simply-got suspensions in the middle parts?

It is ultimately Pärt’s finest achievement that he can deliver intense, direct, sometimes sensual emotion with the barest and simplest of materials—perhaps analogous to the Norman and early-Gothic church architecture for which he exhibits such affinity. Stone and glass; structure and space; eloquence through simplicity. Such eloquence and simplicity shine through in all this tintinnabulist work, where the music’s procedures essentially comprise an extravagantly pure union of the (mostly) diatonic scale and arpeggio, and always-resourceful manoeuvrings of the triad. The Agnus Dei of the Berlin Mass, for example, features alternating vocal strands which are bleak on paper, yet sensual and yielding in performance. And its conclusion, through the simplest of devices, is particularly warm; paired upper and lower voices sing the same music but a crotchet apart, creating the serene collisions and harmonic expressivity for which Pärt seems to have the subtlest of ears. (A similar device occurs in John Tavener’s extraordinary Hymn to the Mother of God, though the two choirs here are further temporally separated.)

And alongside the drama and awesome climax of some of this album’s music is Pärt’s exquisite sense of control and restraint. Texts like the Magnificat or Sanctus—so many times set by his predecessors in a wave of unbounded joy—acquire a more muted sense of wonderment in Pärt’s world: the slightly chilled, restrained ecstasy of the former, with the pensive presence of a C pedal throughout; the sombre processional of the latter, sopranos absent, and with no upbeat transition into the Hosanna.

If Pärt has sidestepped conventionality in the setting of some texts, he is closer to the norm in a work such as De profundis. With a certain body of precedent from earlier times for musical pictorialism, the deep, furry tones of contra-bass voices emerge ‘de profundis’. The booming, thumping intercessions of the bass drum serve perhaps as a primeval heartbeat. And, ever so gradually, the music builds in texture and dynamic level to a climax of awesome proportions, matching the Psalmist’s journey from anguish and despair to a firm hope of redemption. It is a work of perfect structure and immaculately achieved expression.

Berlin Mass
Commissioned by the 90th Deutsche Katholikentage in Berlin, 1990. The original version was for four solo voices and organ, but subsequent versions exist for choir and organ—as here—and choir and strings. The Credo is particularly interesting in that it is virtually a re-incarnation of the earlier Summa—but this time in a major key. Summa was written at a time when profession of faith was outlawed in Estonia; hence Pärt’s diversionary title for a setting of the Creed. The switch from minor to major clearly celebrates the greater freedoms enjoyed in post-Communist Europe.

The Beatitudes
Completed in 1990 (and revised in 1991) for the RIAS Chamber Choir, this is Pärt’s first setting of an English text, and exhibits a consistent approach to each phrase’s metre—short notes flanked by longer ones. A series of upwards chromatic shifts, marked by bass pedal notes in the organ, raises the work’s tonal area to a climax on ‘Amen’ around C sharp minor, before a flurry of quintuplet broken chords in the organ rapidly hurls the music back down to its opening tonality of F minor.

Annum per Annum
Along with Pari Intervallo, this is the best known and most performed of Pärt’s small number of solo organ works. It was written in 1980 for the 900th anniversary of the cathedral in Speyer, South Germany. The five central dance-like variations relate to the movements of the Mass—the Kyrie, Gloria, Credo, Sanctus and Agnus—and they are flanked by an imposing introduction and coda. Here, Pärt suggests that the organ’s motor is respectively switched off and on again in order to effect a diminuendo and crescendo—hence a crashing opening and a crashing conclusion. It is not a stipulation, however, and in this performance, on the organ of St Paul’s Cathedral, it was not electrically possible. Here, therefore, the effect has been achieved by gradual reduction and increase of registration. The extraordinary acoustic of the building seems to take care of the rest.

Magnificat
The Magnificat was commissioned by the Deutscher Musikrat, and composed in 1989 for Christian Grube and the Staats- und Domchor of Berlin. As one of Pärt’s most widely performed choral works, it derives its effect from a gentle eloquence—without actually ‘setting’ the text in a descriptive way—and from the contrast of verse- and tutti-like sections.

Seven Magnificat Antiphons
Composed in 1988 and revised in 1991, written for the RIAS Chamber Choir in Berlin (Pärt’s city of residence since 1982), these antiphons, each endowed with a very particular personality by Pärt, are assigned in the liturgy to the seven days leading up to Christmas Eve.

De profundis
A setting of Psalm 130 for male voices, organ, bass drum, tam-tam and a single tubular bell, De profundis was written in 1980, shortly after Pärt’s move from Estonia to Vienna. It is dedicated to the composer Gottfried von Einem.